Why Is The Woolworths Stock Price Down On ASX?

Why is the Woolworths share price sinking? Well, it seems that investors have been selling down WOW shares today after the retail conglomerate released an update on its 1HFY22 performance. That update revealed a challenging six months for Woolworths.

Hence, the Australian Food business reported sales growth of 2% during Q2. This compares to the first-quarter growth of 3.9% appears weak. This brings Woolworths’ first-half sales growth to 3% year-to-date.

Since the easing of lockdowns in NSW and Victoria during October, sales at Woolworths have moderated as customers return to more normal shopping habits. In addition, inclement weather and the ongoing decline in tobacco sales impacted the company’s earnings.

Unfortunately, on top of its softening sales, the food business has incurred significant costs relating to COVID-19. Therefore, due to these direct and indirect costs, Australian Food EBIT is expected to be in the range between $1.19 to $1.22 million during the first half. This is moderately below vis-à-vis 1HFY21 Australian Food EBIT of $1.33 million.

On the other hand, the BIG W business delivered an improved performance during Q2. However, its sales were still down by 3.3% over the prior corresponding period. Considering this, BIG W EBIT is expected to be just $20 to $30 million for the half, down from $133 million a year earlier.

Finally, the New Zealand Food business has been the star performer. Sales growth has been strong in the first half, benefitting from extended lockdowns and higher inflation in the country.

The supermarket business may have a few acquisitions in mind

Woolworths may be on the lookout for another acquisition to boost and diversify its earnings. The business is more than just a supermarket business. It also has a business-to-business segment, which includes PFD Services, the foodservice distributor. This demonstrates that Woolworths is willing to expand. PFD Services distributes a wide range of food service products.

Recently, we have heard in the news that the healthy meal delivery business “Lite n’ Easy” is going through a sales process. It appears that the owners, Graham Mitchell of Mitchell’s Quality Foods are in discussion for a potential transaction. The “Lite n’ Easy” business is estimated to be worth circa $1 billion. Lite n’ Easy valuation is based on the EBITDA of $65 million.

The private equity Kohlberg Kravis Roberts is interested in the business. Kohlberg’s interest comes from the fact that it has an Australian food manufacturing business, Arnott’s Biscuits. Thus, the acquisition could benefit from a division focused on ready-made meals.

Woolworths is also a solid contender for Lite n’ Easy. The potential sale of Lite n’ Easy comes at an interesting time. Whilst Woolworths may be capable of funding a $1 billion acquisition, it is already in the thick of a takeover battle of Australian Pharmaceutical Industries Ltd (ASX: API).

Woolworths has launched a non-binding bid to buy 100% of API at a cash offer price of $1.75 per API share. This equates to a total equity value of $872 million.

Woolworths’ acquisition of API is a compelling strategic rationale. Thus, the “health and wellness” business is a large, fast-growing category. Therefore, API would be a fantastic addition to Woolworths’ food and everyday needs ecosystem. 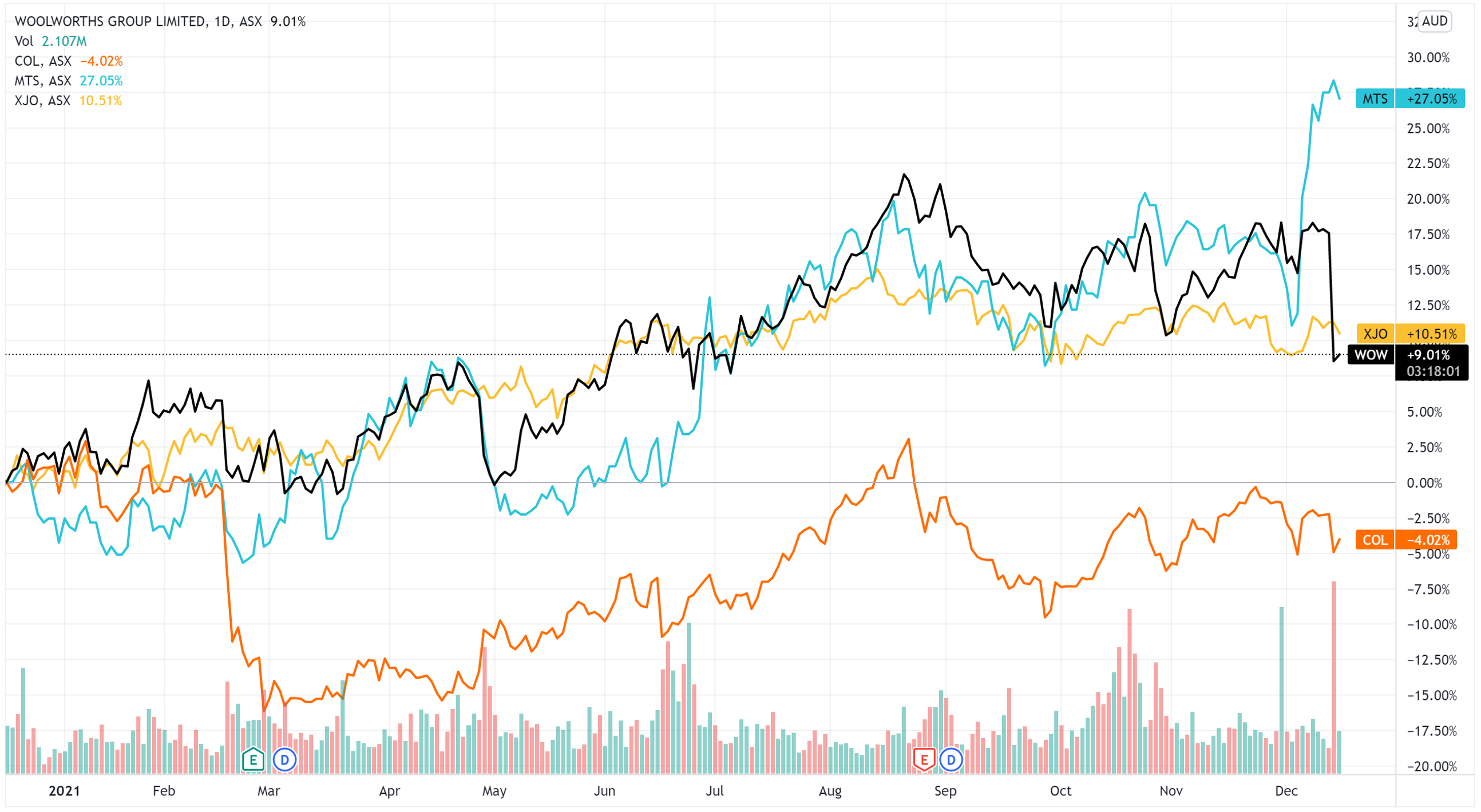 For the last twelve months, Woolworths’ shares performance has been in line with the broad market. The company saw its share appreciated by 8.4% year-to-date and about 9% in the last trailing twelve months. In comparison, two of its major competitors, Coles (ASX: COL), Metcash (ASX: MTS) returned -4%, and 27%, respectively.

When we look at the big picture, over the last five-year period, Woolworths shares gained more than 86%. Likewise, with the recent positive outlook that the company exhibits, we believe it might be a unique opportunity to consider Woolworths. Indeed, its shares are still relatively undervalued.