Woodside Petroleum rallied in the last five days and has been trading at the highest price since March 2020, the beginning of the pandemic. The stock gained around 115% over the previous two years after touching a $16 per share price in March 2020, the lowest price since May 2005. The major contributor to the surge of the stock value is the current geopolitical scenario.

Currently, WPL is trading at $34.41, gaining more than 19% in the last five days. The market of the company is approximately 33.378 billion AUD. 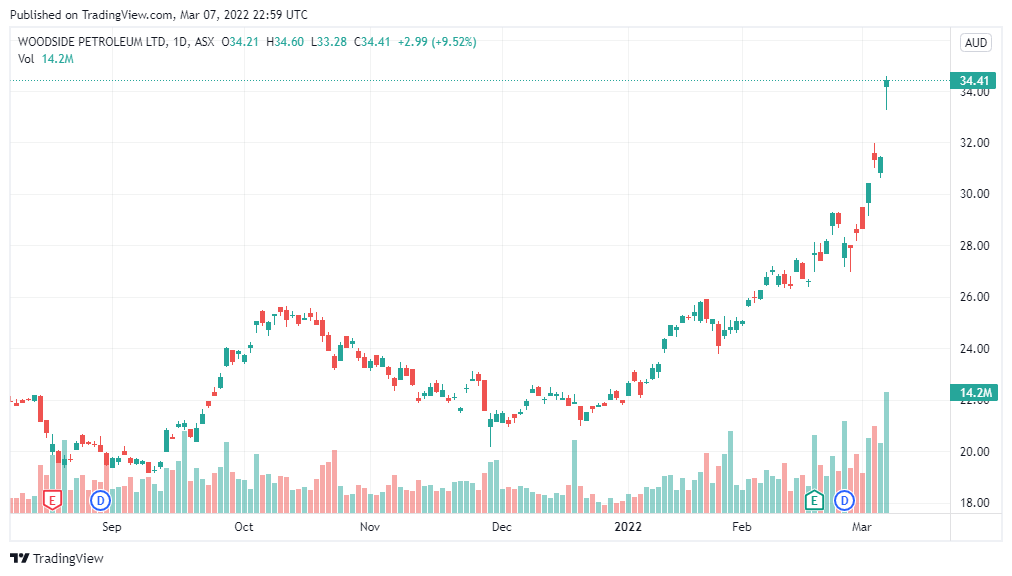 What is causing WPL to Flare-up?

Russia invaded Ukraine on 24 February 2022, and after this mega event, the global inflation rate and energy prices have severely increased within no time.

Russia is the second-largest oil producer globally and currently contributes 5% to the global oil demand. The largest oil producer globally is Saudi Arabia, responsible for 15% of the worldwide oil supplier. Russia is also among the biggest players in the world when it comes to the supply of Gas to the west. Currently, Russia fulfils 30% gas demand of Europe and supply Gas to Europe via different gas pipelines spread across Europe.

But since Russia has invaded Ukraine, industries worldwide have been severely affected due to the supply chain disruptions. The most affected sector among it is the global oil and gas prices. The gas prices are skyrocketing at the moment. Coal is trading at the highest price in history, and Brent crude is trading at the highest price in 13 years. The current price of Brent crude oil is approximately US$118 per barrel.

According to Bloomberg data, Brent crude oil prices were as low as $69 per barrel as of 1 December 2021. It is again 42% since December. To confront Russia, western countries are considering imposing economic sanctions on Russia. As soon as the news hit the market, the Brent crude oil saw an 8% price hike in the last 24 hours.

Due to the global surge in oil and gas prices, Woodside Petroleum is witnessing a significant increase in its stock value.

This month, Woodside Petroleum reported deploying its first 3D printed component into essential service on an operating asset. To demonstrate Woodside’s trust in 3D printing replacement parts, Woodside has successfully installed and put into operation a 3D printed valve on its Goodwyn A platform following comprehensive testing and qualification.

In January 2022, the part was placed on the platform after it was approved for use in pressure-containing critical service applications.

The company expects that the value-creating actions made in 2021 will change Woodside and position it to prosper in the energy transition.

After 67 years, November 2021 may be Woodside’s most significant month, with the merger of BHP’s petroleum division and the final investment decisions on the Scarborough and Pluto Train 2 projects. The company believes that with this merger, they will establish a global energy firm with the cash flow and balance sheet strength to deliver value to its shareholders across economic cycles, continued synergies, and a higher capacity to engage in the energy transformation.

The merger is expected to close in early June 2022, pending a shareholder vote on the deal on 19 May 2022. The significant cash flow generated by the Scarborough and Pluto Train 2 projects could help fund Woodside’s future advancements and new energy investments. In November, the final investment decisions increased Woodside’s Proved plus Probable (2P) Total Reserves by almost 1.4 billion barrels of oil equivalent.

The increasing inflation rate, supply chain disruption caused by Covid-19, and the Russia-Ukraine conflict have affected all industries across the globe. The economic sanctions on Russia have triggered a surge in the global prices of Brent and WTI crude oil. It has increased the demand for petroleum products, and big players such as Woodside Petroleum would see a significant increase in revenue.