Following Russia’s invasion of Ukraine, the West has decided to stop trading with Russia as a gesture of support to Ukraine. Russia is amongst the top producers of oil and gas. Russia’s supply of gas fulfills the 30% need of Europe. While Russia caters the 5% of world oil demand, second after Saudi Arabia. As a result of the invasion, the world has cut ties with Russia to not buy its oil and gas until they call the invasion off.

The supply chain of oil was disrupted, and the West was exerting more pressure on Saudi Arabia to produce more oil. Following this disruption, oil prices hiked during this period. Due to this, oil and gas prices surged to new heights.

The oil and gas sector has seen a significant boom in 2022, and Woodside Petroleum (ASX: WPL) is witnessing a great deal of appreciation in the business. The company has seen significant growth of 34% in its share price. Although the company has seen massive growth over the past 12-months, it still hasn’t reached the pre-covid levels.

Will the WPL share price see the peaks before the pandemic? If oil and gas prices continue to rise at the current pace, it’s an apparent estimation that its stock price can increase. But other variables also play a vital role in a company’s stock price.

WPL shares are currently trading at $29.89, and if we look at the previous twelve months, WPL stock has gained around 34% in one year. The company has taken significant steps to take the stock to new heights. The company is trying hard to beat the pre-covid levels. 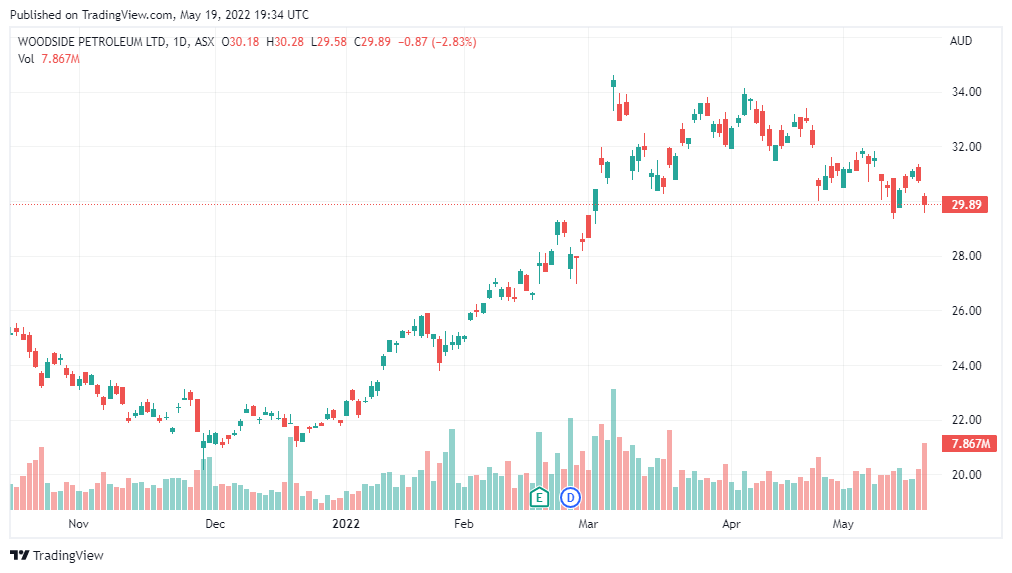 WPL and BHP inked a deal

WPL recently announced that they are merging with BHP’s petroleum assets. On May 19, 2022, after the shareholder voting, it was revealed that its shareholders had agreed upon the anticipated merger. The merger is expected to be complete by June 1, 2022.

WPL shares are rising in the market. The merger with BHP’s petroleum business will create a global independent energy company with the scale, diversity, and resilience to provide value to shareholders and better navigate the energy transition.

After purchasing BHP’s oil and gas businesses, Woodside will be a $60 billion oil and gas giant. As a result of this deal, WPL will be able to gain assets on its balance sheet while simultaneously having enough cash on hand to finance new projects and existing ones, such as the Scarborough project.

WPL is anticipating that the Scarborough LNG project has the potential to become Australia’s massive and biggest oil and gas project for at least 10 years. The production estimates are around 9 million tonnes of LNG per year. The company has forecasted to cost around $16 billion per year. The project is anticipated to start in 2026.

Scarborough is an important project, but on the other hand, there have been some concerns over its environmental impact. The proceeding could help fund some green energy projects, but the company has raised the point that natural gas is part of the decarbonisation process. It will eventually generate some emissions, and the green energy groups and the government does not like it.

WPL: Oil Prices are going to play a huge role

In fiscal 2020, the company announced a loss of $4 billion, while in fiscal 2021, it witnessed an NPAT of $2 billion. The reason is the increased oil prices.

After the war broke out in Europe, the world cut ties with Russia, and as a result, the world has witnessed a severe hike in oil and gas prices due to a supply crunch. The world was battling increased oil demand as economies began recovering from the pandemic. The war has escalated the supply crunch.

Woodside Petroleum (ASX: WPL) is yet to reach its peaks seen before the pandemic. However, the company is doing what it can to boost its assets and production. The high oil prices that are estimated to continue for in the near future should help Woodside continue to deliver high profits. The new merger will bring added firepower to Woodside. The outlook of the Scarborough project is robust, and when it starts to add value to WPL’s business, it will be the largest oil and gas project!