Whitehaven Coal Ltd (ASX: WHC) is an Australian coal mining company that produces premium quality coal. The company is focused on developing and operating coal mines located in New South Wales and Queensland. The company was founded in 2007 and is headquartered in Queensland.

The company has four mines, out of which three are open-cut, and one is a large underground mine located in the Gunnedah Coal Basin of NSW. The company aims to own and operate large, lower-cost mines producing a mix of high-CV thermal coal and premium semi-soft coking coal.

WHC shares are gaining in the market after the company released its fourth-quarter results. The company is excited to announce record coal production.

WHC shares are trading at $5.90 and have gained more than 5.17% in the intraday trading session on Monday. The current market cap of the company is 5.64 Billion AUD. 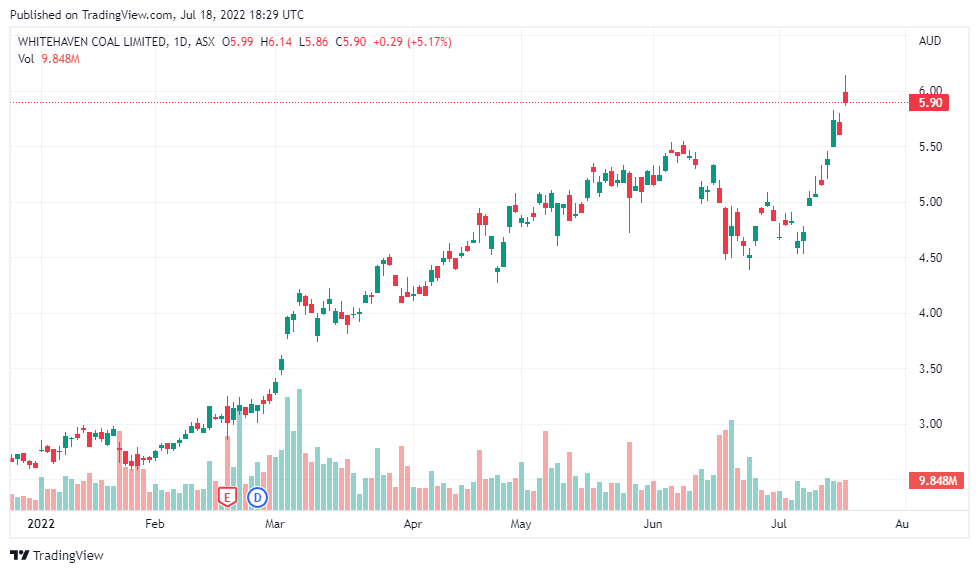 High-quality products were sold in the June quarter, with excellent production and sales volumes. The EBITDA of fiscal 2022 is remarked as the “strongest ever full-year result.”

According to the business, coal prices reached a new high in the fourth quarter of this year and remained “well supported.”

Narrabri’s anticipated longwall step around from panel 110A to panel 110B, which began in mid-June and is expected to be completed in late July when longwall production begins, mainly went according to schedule.

June quarter coal sales were 84% thermal coal, and 16% metallurgical coal, with 92% of the thermal coal sold being high CV.

Aside from sporadic weather disruptions, COVID-related absenteeism continuing at lower levels than in the March quarter, and general labour constraints, mine operations functioned well, and sales were robust.

When it comes to supporting energy security and generating excellent returns for shareholders in the face of an increasingly tight global supply of high-quality coal, Whitehaven CEO Paul Flynn says the company is well-positioned.

Despite a tight labour market and COVID-related absenteeism, we were able to meet our FY22 production and sales goal thanks to improved operational efficiency.

Whitehaven had a net cash position of $1.0 billion at the end of June, with solid cash flows, allowing the company to maintain a healthy balance sheet and distribute money to shareholders via franked dividends and share buybacks.

Whitehaven sees thermal coal prices as strong for FY22 and FY23, especially after significant rain in the Hunter Valley in early July. While metallurgical pricing is good compared to historical levels, they predict continued volatility owing to global economic constraints.

Whitehaven stated the NewC global coal quarterly index had risen for seven quarters. Asia-Pacific thermal coal prices are based on this index.

Despite the harsh economic condition, rising inflation rate, and disruption in the global supply chain, the company has delivered excellent results. They have focused on the Asian countries where the demand for their coal exists and increased their clientele. The company has grown exceptionally in the past year as coal demand has soared. WHC is one of the biggest coal stocks on the ASX.