Vulcan Energy Resources Ltd (ASX: VUL) is a lithium stock on ASX aiming to be the world’s first Zero Carbon Lithium company in the electric vehicle industry. The company produces lithium for EV batteries and renewable energy businesses. The company was founded in 2018.

Renowned chemical engineers and geologists back the company with zero-carbon energy footprints. The company sees Europe as the fastest growing market for the EV industry and aims to solve its lithium needs in the upcoming years. The company has tremendous resources in the Upper Rhine Valley of Germany to serve the purpose.

The company is currently targeting Europe, the fastest-growing lithium chemical market. Europe has zero local supply at the moment. Vulcan Energy will not only solve Europe’s lithium problems but also help them grasp a good market share in the future’s biggest electric vehicle market.

VUL stock has lost more than 25% in the previous 5 trading days. In the intraday trading session today, the company lost around 14%. The VUL stock is currently trading at a 52-weeks low. VUL stock is trading at $5.52 with a market cap of approximately 730.63 Million AUD. 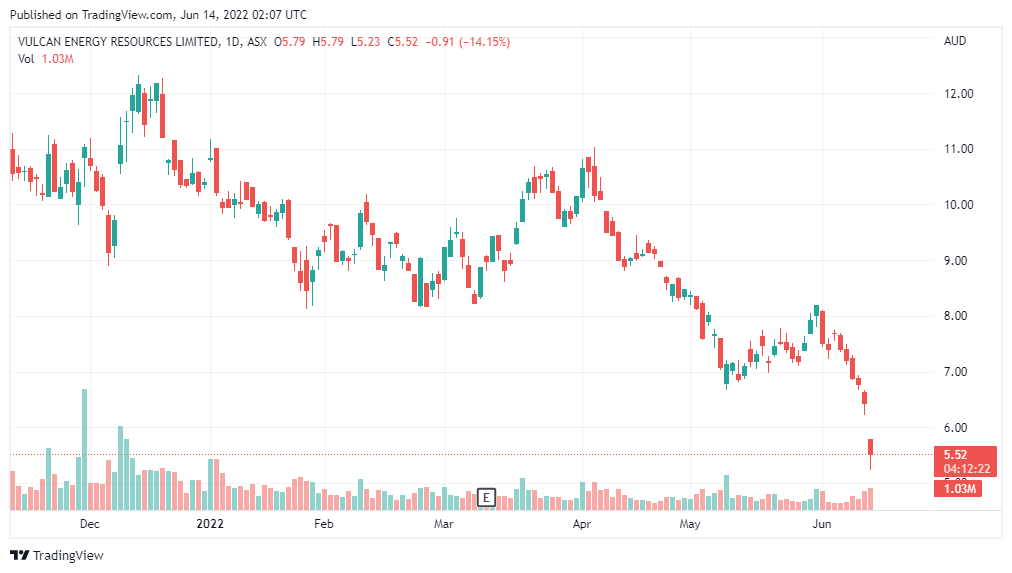 Why is VUL Stock losing value?

Previously one of the renowned financial institutions, Goldman Sachs updated its price targets for lithium in 2022. As a result, most lithium stocks listed on ASX and other financial markets across the globe crashed and lost a significant percentage in their valuation.

VUL, a lithium stock listed on ASX, got a severe blow from the new price targets for lithium. As a result, they lost 25% in the valuation in the last 5 days and 13% in the intraday trading session today.

VUL is a significant lithium stock on the ASX and was one of the prominent lithium stocks due to its valuation. The company was founded recently in 2018, but its team of highly qualified industry experts and its zero-carbon lithium company caught the attention of investors. The company is sitting on the massive resources in the Upper Rhine Valley of Germany, which aims to dominate the lithium market scene in Europe. But the current price targets for lithium resulted in the lithium company shedding a significant amount of value.