Vanadium Stocks to compete with lithium to disrupt the Electric Vehicle Industry?

The 21st most plentiful element on Earth, vanadium, is a transitional metal. Color-wise, it’s a silvery-white or greyish-white. Discovered and misidentified as Chromium by Andrés Manuel Del Ro y Fernández in 1801 Vanadium was later found by Nils Gabriel in 1830, and he renamed it Vanadium. When compared to Gold, Silver, or even Nickel, vanadium doesn’t have the same level of recognition. Although it is not so much known, we see it in various everyday objects and structures. One of the reasons the market has yet to appreciate its economic importance is that most people have never heard of it. However, its tensile, ductile, and corrosion-resistant characteristics make it a vital component of the industrial sector.

Usage and Importance of Vanadium

Vanadium is an essential component in many metal alloys, even though scientists have not discovered its potential applications. As a result, it is expected to see rapid expansion in the years to come. Its principal use has been in the strengthening of steel. World-famous buildings and bridges like Chicago’s Willis Tower, Hong Kong Central Plaza, and the numerous new structures built throughout China make use of it. The need for high-strength steel is rising as design demands continue to rise. Vanadium is also used in many other steel-based products and processes. Parts and components of heavy machinery and industrial tools and automobiles, and medical gadgets are included in this category.

Its potential use in green technology is what elevates vanadium to the status of a future super metal. A key benefit of standalone solar and wind power facilities is storing a large amount of energy in vanadium-based batteries. Other uses include automotive components, aircraft, oil refineries, chemical plants, offshore platforms, trains, freight containers, ships, and construction equipment.

Importance of Vanadium in the Electric Vehicle Industry

Energy storage is the most intriguing use for vanadium. Professor Maria Skylos Casakos created the first vanadium redox flow batteries in Australia in the 1980s at the University of New South Wales. In the vanadium redox flow battery, four distinct oxidation states of vanadium are used to create a battery that only has one electroactive ingredient rather than two. Large-scale renewable energy initiatives that utilise vanadium pentoxide have the potential to change the green energy market. Compact, non-flammable and reusable over thousands of cycles, vanadium flow batteries provide a rapid reaction time. Unlike lithium, vanadium batteries don’t contain any flammable solvents, making them far more critical than lithium since they’re safer.

Eighty-five per cent of the world’s vanadium is presently produced in South Africa, China, and Russia. However, due to technical advancements in battery storage for renewable energy sources, there has been a significant increase in vanadium exploration and development in Australia’s mineral-rich northwest Queensland region in recent years.

AVL stock is an important ASX-Listed Vanadium stock involved in the mining and exploration of Vanadium, Uranium, Titanium, Gold, and Copper. The company is mainly known for its mining project located in Western Australia and Northern Territory. It is a rising producer of Vanadium in Australia.

The funds will also be used to strengthen the collaboration with ATCO Australia for green hydrogen and Bryah Resources Ltd. (ASX: BYH) to explore and recover copper, nickel, and cobalt.

A 5kW-30kWh VRFB powered entirely by solar energy was used in the experiment. As a result of this study, vanadium battery-based Electric Vehicle charging stations may now be installed anywhere in Australia.

AVL has returned 410% in the last six months

AVL is a pre-revenue company. The company’s performance is currently excellent, and it is moving forward to enhance its grip on the Australian vanadium market.

AVL shares are currently trading at $0.10 and were trading at $0.02 in October 2021. It has returned 410% to its investors in the last six months. The company’s trading volume is around 53.38 million and has a current market cap of approximately 338.17 Million AUD. 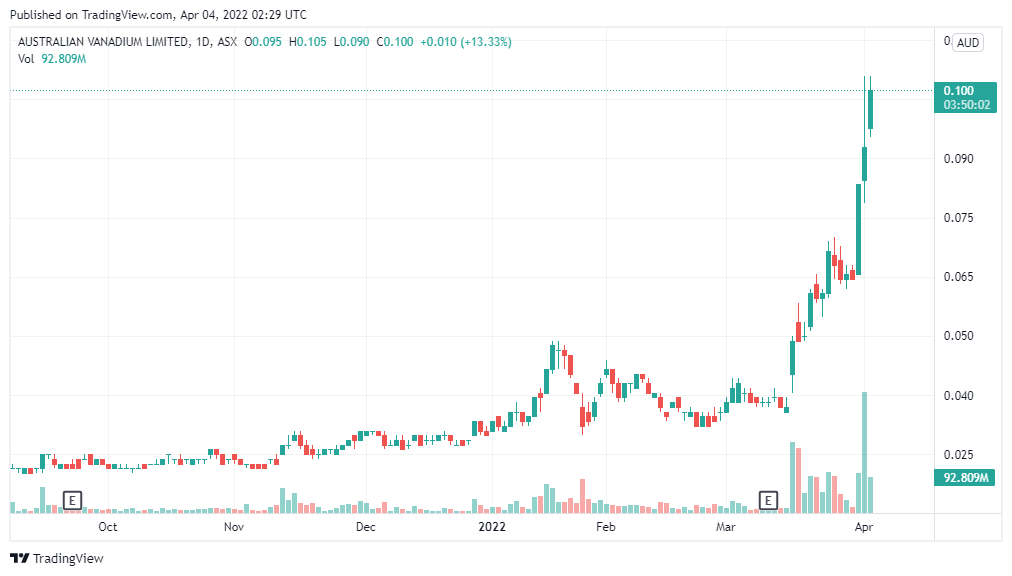