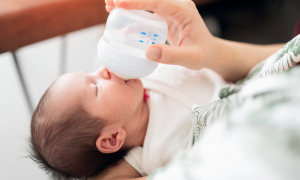 Now with a frightful tone, Americans are shouting the famous slogan from 30 years ago literally asking for infant milk. Australia, favoured with rich resources and a growing dairy sector, can support the US in these challenging times. This brings strong economic gains whilst saving lives.

The out-of-stock average of baby formula in the US has jumped to an alarming 40% following Abbott’s closure of their manufacturing plant last February. Abbott accounts for almost 50% of the country’s domestic production.

The lockdown in China, which resulted in supply chain delays, aggravated the crisis. Parents are now desperately looking for alternatives as seen in YouTube’s latest statistics. “Homemade baby formulas” has reached a 200% increase in searches. This sparks fear amongst paediatricians and other healthcare workers in the US, thus, the need for other countries to ‘milk their cows.’

Whilst Abbott will resume their operations in June and is expected to restock shelves in July, the time frame is too long for parents and babies. Milk producers from other countries are now cashing in on FDA’s relaxation of regulations.

Top ASX Dairy Shares to Watch Out For

Australia exported around 35% of its milk production and was valued at $3.2 billion in 2018-2019. But with the US’ potential to open its market to overseas companies, investors are set to milk huge gains from the dairy sector. Here are the top ASX infant formula shares to invest in 2022.

There’s no stopping this company from grazing through the US market. They now have 500,000 tins ready for export and the remaining 750,000 will be completed in the months to come.

In their FY21 annual report, Bubs shared that their Deloraine Dairy production facility can process up to 10 million tins per year. They have already established their brand in Australia and China, with the US as their ‘next frontier.’ In fact, they have a distribution network of their toddler milk in the US. Currently, the company’s stock is more than 20% pre-market and its share price has rallied 12.50% in the last week of May.

a2Milk (ASX:A2M)
a2Milk is another big player in Australia’s infant formula sector. They’re so big that it filled the void in China when the country faced local scandals involving chemical melamine found in baby’s milk in 2008.

Whilst a2Milk reported a 30% revenue decline in their 2021 investor update, they now show more positive results with their share price rally almost 10% in the third week of May. Their decent net income growth of 8% over the past five years demonstrates good strategic decision. And since they are not paying any dividend, it could mean they are reinvesting their profits into the business. Overall, a2Milk has a good potential to develop strategies to offer infant formula in the US.

Synlait Milk (ASX: SM1)
Synlait Milk is a New Zealand-based company that combines expert farming with state-of-the-art processing to produce a range of nutritional milk products for its global customers. Synlait’s state-of-the-art nutritional facility gives them the ability to tailor-make nutritional formulas to specific customer requirements. Through feeding and breeding technologies, the company can differentiate products at the point of production to allow crucial traceability of ingredients.