Qantas Airways Limited (ASX: QAN) is one of Australia’s largest airline brands and the world’s second-oldest airline brand. Founded in 1920, more than a century after it was formed, the business is still doing strong. Domestic and international flights are the company’s primary focus.

Australia’s largest airline, Qantas Airways, is regarded as one of the world’s most dependable airline brands. Qantas and Jetstar are two of the company’s airlines. Jetstar is a budget airline company that mostly flies between Australia and New Zealand.

In June, the company lost more than 19% in valuation. The company is facing issues such as staff shortage and jet fuel costs surge. 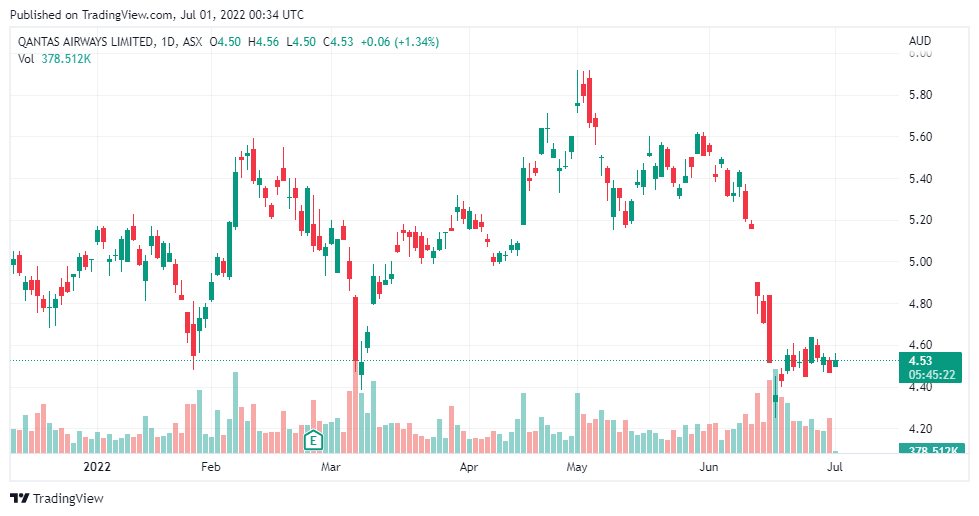 Why are QAN Shares Flying Low?

In the first week of June, QAN shares were on track to hit the benchmark performance and lost 1.5%.

In the second week of June, QAN shares lost 19.7% due to slow trading days.

Meanwhile, news like the shortage of ground staff made investors reluctant to invest.

On 9 June, the company asked for volunteers from its front office managers to assist overwhelmed ground crew. Due to the pandemic, the company had to reduce staff, but now they are facing a shortage because of the domestic travel rebound to the pre-pandemic level.

Just as domestic travel returned, international travel is still struggling to reach the pre-pandemic levels. As a result, Qantas is charging higher prices and a low number of flights to meet the operational expenses.

Meanwhile, jet fuel prices also increased as a result of disruption in the global supply chain of oil due to the Russian invasion of Ukraine.

QAN: Looking at the bright side

Between all these happening, Qantas achieved some milestones as well. It wasn’t all doom and gloom in June.

The rising inflation and the disruption of the global supply chain of oil are affecting every industry. The world had just come off the pandemic, and things were moving towards normalisation. However, the war in Europe set the recovery back. It seems as though the conflict will prolong, and inflation and oil prices will remain high.