Telecoms provider Telstra Corporation Limited is an ASX listed company based in Australia and provides phone, mobile, broadband internet access and pay television and other services.

Telstra has the most Australian wireless users under its belt and is the market leader in the industry. When Australia federated in 1901, the Postmaster-Department General’s was formed, and Telstra and Australia Post were both established. New goods and developing technology emphasize Telstra’s transformation from a state-owned firm to a wholly privatized corporation.

Today the company announced its half-year results, and its stock plunged in the market despite showing growth in the underlying business. In the previous reported fiscal 2021, the revenue was down, but the company’s net income was up. But in the first half of 2022, the revenue and net income both saw a decline, especially net income decline by 34%.

TLS was down in the day trading after announcing its half-year fiscal 2022. The stock has not witnessed any significant gain or loss in the past year. 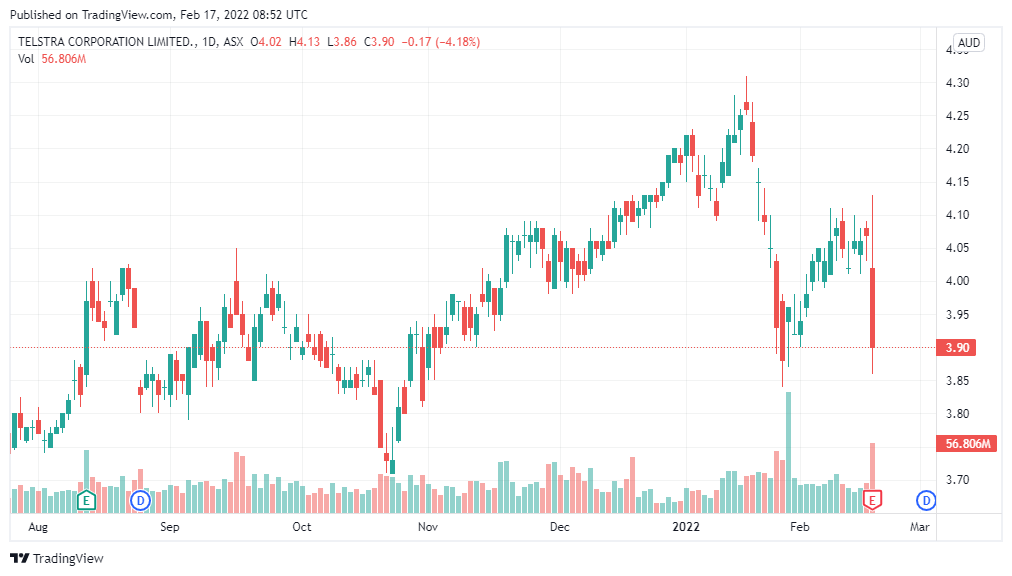 Telstra’s investors now get two payments every year: interim and final dividends. The Board of Directors of Telstra Corporation Limited decided to pay an interim dividend of 8 cents per ordinary share on February 17, 2022. The interim dividend is fully franked at 30% tax. Payable on April 1, 2022; the record date is March 3, 2022. On March 2, 2022, stocks will cease to be dividend-paying. The DRP will be in place for the 2022 interim dividend. A vote in the DRP is required before March 4, 2022. As of December 31, 2021, the Board has neither determined nor publicly suggested an interim dividend for the fiscal year 2022. As a result, the dividend is not reflected in the financial statements. The interim dividend had been provisioned for $940 million as of the resolution date.

The company also finalized the purchase of 70% of Power Solutions Holdings Pty Ltd and its subsidiaries on November 9, 2021. In addition, Power Health must meet specific financial targets over the first two years, and the remaining 30% shares must be bought out between years two and five from completion or otherwise acquired by year five.

Telstra did not comment on the second half of fiscal 2022, although the company has reiterated all of its FY 2022 forecasts. The company expects an underlying EBITDA of around $7.3 billion and free cash flow after lease liabilities of $3.5-3.9 billion for the entire year are included in this estimate.

Telstra Corporation Ltd.’s growth rate is not that significant at the moment. The stock also did not see any substantial change in the value. Even though TLS saw an increase of 18% in the trailing twelve months, the stock is amongst the best candidates for investors looking for a long-term investment.