Southern Cross Gold Ltd (ASX: SXG) is a Victoria-based natural resources business that conducts exploration of precious and essential mineral properties. The company went public on ASX on 16 May 2022.

The company has started its week with a massive positive trend. SXG went public a couple of weeks ago, and it announced on Monday about the positive drilling results. As a result of which, its stock gained by more than 232% in the intraday trading session on Monday.

SXG has gained massively since listing on ASX

SXG is currently trading at $0.66 and has gained massively by 232% in the intraday trading session on Monday. The company’s stock emerged from a trading halt before the news hit the market. 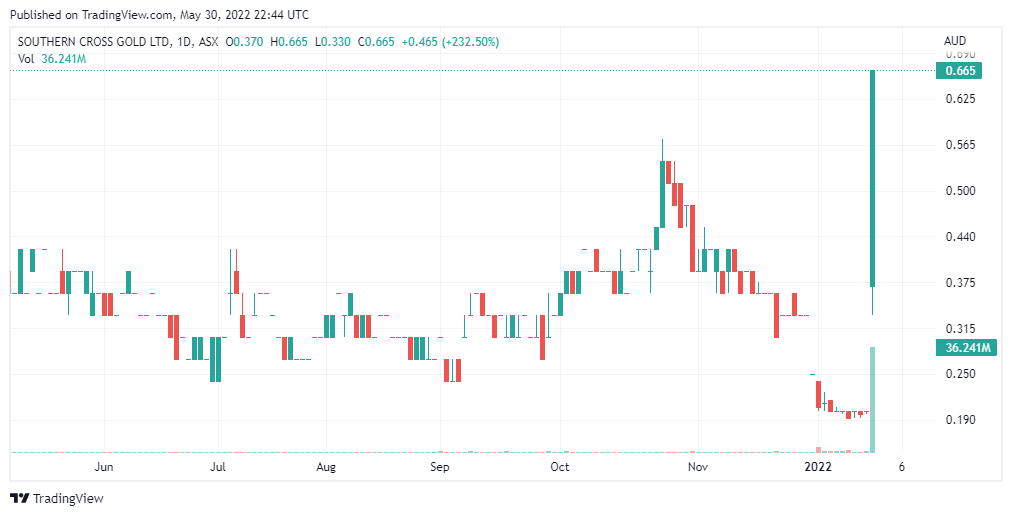 The reason why SXG shares are Gaining

The company announced the results soon after it emerged from the trading halt announced on 27 May 2022. The investors were speculating about a significant announcement by the company.

SXG: Further Details on the Drilling

SDDSC033 was drilled to investigate a 120-meter gap west of the Apollo shaft between three mineralised shoots. 60-70 percent of the tested thickness represents the entire mineralised thickness.

Extensive and high-grade mineralisation in SDDSC033 is being targeted with priority drilling.

Sunday Creek currently has thirteen 100 g/t AuEq x m crossings as a consequence of these recent findings. The test findings for the last four holes (SDD034-37) have been sent to the assay laboratory and will be made public whenever they are obtained.

Michael Hudson, the company’s managing director, said the breadth of high-grade mineralisation is unmatched in the Victorian goldfields. Sunday Creek’s 119.2m @ 3.9 g/t AuEq result builds on a successful drill programme. The Apollo Shoot has an enormous breadth and slopes down to 335 m vertical depth, while numerous nearby shoots remain to be drilled. We expect further results with freehold property, industry-leading drill results, excellent local ties, a team of ore discoverers, and a drill rig targeting SDDSC033 expansions.

The discovery at Sunday Creek is described to be unprecedented. The Sunday Creek is 100% owned by the company. Near Melbourne, 60 kilometres north, the Sunday Creek epizonal-style gold property is situated within 19,365 acres of officially awarded exploration permits for gold prospecting. Sunday Creek is regarded as one of Victoria’s best recent exploration findings. SXG is a gold stock that has a huge potential to join the club of top ASX-listed gold stocks in the future.