The company’s business model is based on the buy now, pay later (BNPL) format. Zip Co Ltd (ASX: ZIP), also a BNPL company listed on ASX, announced in February 2022 that they would acquire Sezzle by the end of CY22.

SZL shares have seen a major spike in the share price this morning, leaving behind the all-time low of $0.25. 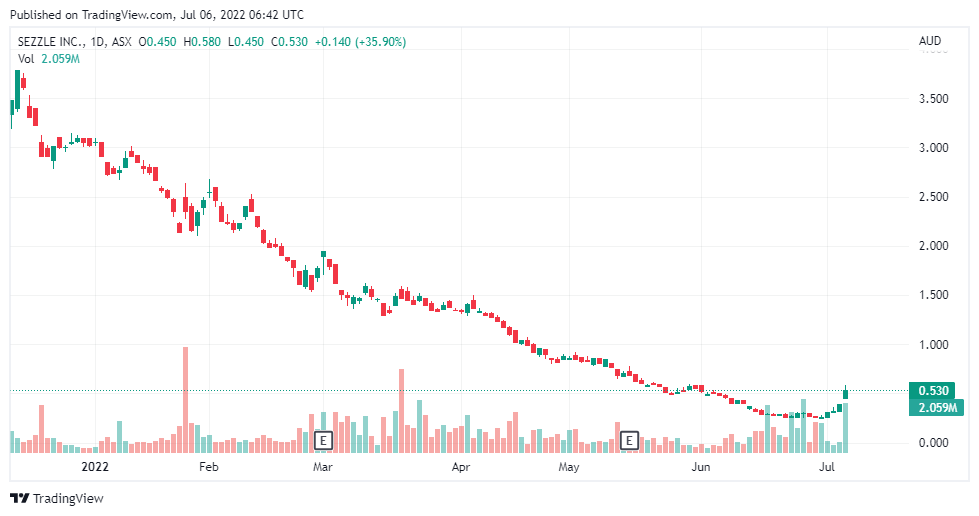 The Reason behind the SZL Shares Sudden Gain

SZL shares have seen tremendous growth this morning, leaving behind the all-time low mark. SZL shares are currently 35% up compared to its all-time low of $0.25. The stock went up as high as 49%, or $0.58 per share.

The reason behind the sudden is not apparent at the moment as the company has not released any stock-sensitive news. We can only make assumptions, and one reason could be the bulk selling by investors looking to claim tax loss, and as fiscal 2022 ended, there seemed to be no incentive to sell.

Similarly, NASDAQ strengthened overnight in the United States, triggering investors to buy ASX-listed Technology stocks. As a result, SZL and ZIP are roaring.

Last Year Has Been Rough For SZL Shares

The previous 12 months had been a roller coaster ride for the BNPL shares, including Sezzle and ZIP. SZL was listed on ASX in July 2019 and was valued at $1.22 per share. After one year, SZL shares were valued at $11.34 in August 2022.

Everything was going smoothly, and investors invested heavily in the SZL stock. Investors saw the BNPL sector as a lucrative, more effective, and widely accepted alternative to credit cards. Investors admired Sezzle’s exposure in the US market, where BNPL was booming.

But in the last few months, the SZL shares have been completely exposed to the downfall due to the increasing inflation rate. The current inflation rate is the highest in decades and has compelled people to cut their expenses, increasing their debts. Investors also realised that not any of the BNPL companies are profitable.

The current rise in the BNPL shares is not understandable at the moment. Only time will tell ifit was a one-time spike or the beginning of a new dawn. Investors should remember that the latter is only possible if the Sezzle and ZIP merger happens and both companies start making money by utilising their strengths. If it happens, SZL shares could be the best chance for investors looking for a BNPL stock with huge potential.