Iron Ore prices have risen as high as US$169/tonne in 2021. This has done wonders for Australia as it is the highest producer of iron ore in the world. According to estimates, Australia has 30% of the estimated 170 billion tonnes of iron ore in the world. The commodity generates over $100 billion in export revenues, and it is the only commodity to crack the $100 billion club. The performance of the commodity price has also resulted in the Australian dollar strengthening and it is forecasted to hit the 80 cents mark by the end of the year. In case you missed our analysis, you can read it by clicking here. Amid high commodity prices, our juggernaut iron ore miners have posted exceptional earnings results for the first half of FY2021.

So why are Iron Ore prices so strong?

Commodity markets work on supply and demand, and in order to look at the drivers of commodity markets, we have to look at both the supply and demand side. Let’s start off with the demand. China. Everybody knows China is the largest importer and its economy is expected to surpass the US economy in the next decade or so. But how much has the demand increased in China in order to cause over 70% increase in iron ore prices in less than a year?

China’s recovery has been very sharp and this recovery is being driven by a boom in construction and infrastructure. In order to facilitate a construction boom, steel is arguably the most important input. As of December last year, China had produced 51 million tonnes more steel than it had in 2019. This increase is staggering considering the country was put on a standstill for over 3 months due to the pandemic. Compared to 2018, China produced 110 million tonnes more in 2020. It is producing steel at an average rate of 3 million tonnes per day during the past 6 months. On a side note, it took just 52,000 tonnes of steel to construct the Sydney Harbour Bridge. 3 million tonnes a day is roughly equivalent to 58 Harbour Bridges.

Australia produces about 930 million tonnes of iron ore annually. In January 2021, China’s iron ore import was 1.17 billion tonnes. 713 million tonnes is reported to be imported from Australia – up 7% from last year. The other large exporter to China is Brazil at 236 million tonnes. Simple supply and demand mechanics would tell you that if the demand for a commodity from China has risen by a hundred million tonnes while supply from the key providers is unchanged prices simply have to rise and rise they certainly have. But it has been much more complicated than that. Global supply has declined due to the coronavirus restrictions.

Vale, the Brazilian giant was the world’s largest producer of iron ore. However, it lost its spot to Rio Tinto due to the Bukit tailings catastrophe. This coupled with the pandemic restrictions squeezed the supply of the commodity. The Q420 report showed that Vale reported a 5% decline from Q3. The company is looking to return to 400 million tonne capacity, however, the recovery is taking longer than expected. Vale produced 300 million of iron ore in 2020, below its guidance of around 330 million tonnes. For 2021, the Brazilian miner has put out a production guidance in the range of 315 – 335 million tonnes. Our Aussie miners have been dishing out the commodity at full capacity during this time, but the supply is very sensitive to any disruptions to the major suppliers. The supply coming from Western Australia is extremely critical to the global iron ore price. 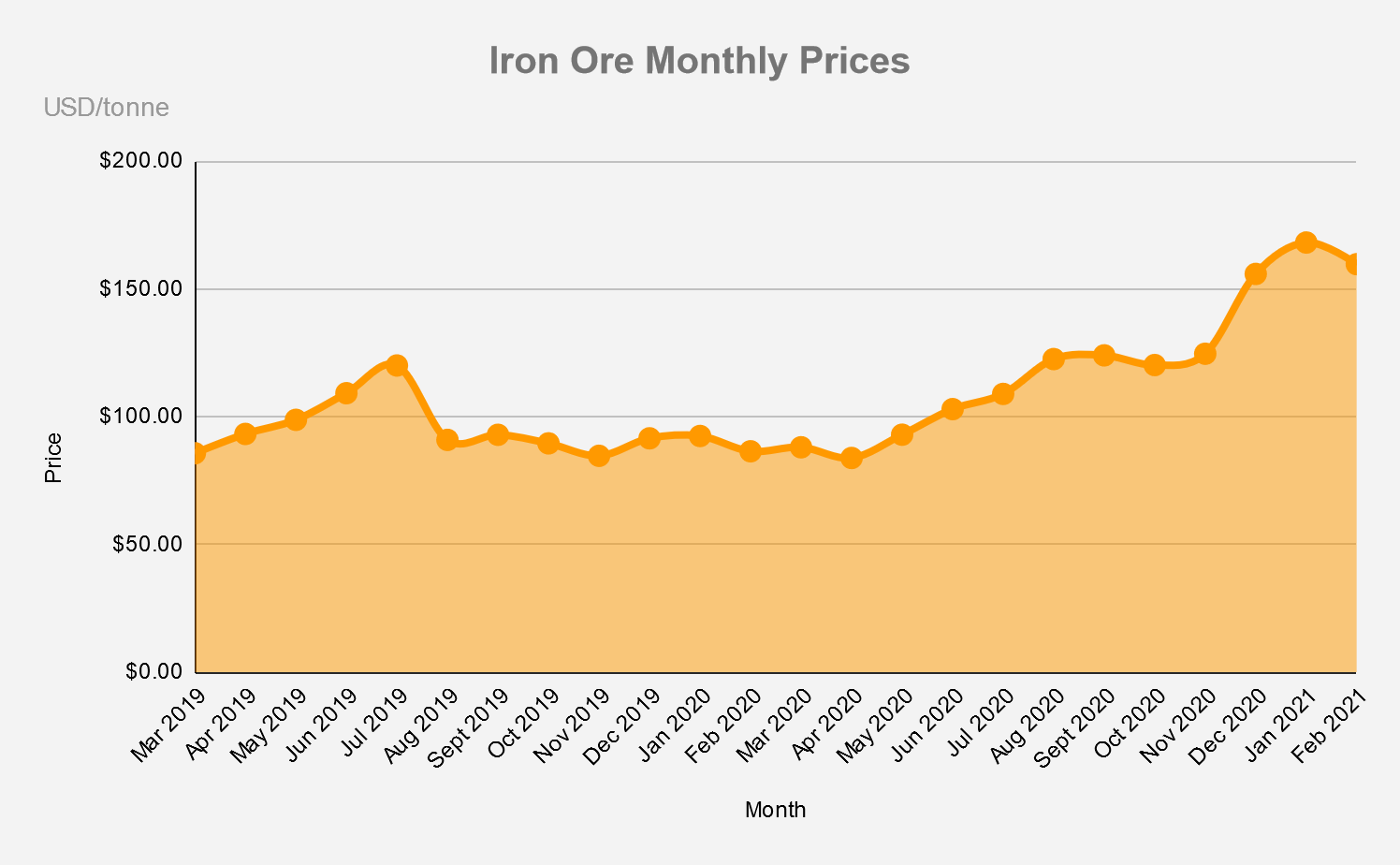 Iron ore forecasts change in a matter of days due to the high sensitivity to the global economic activity. At the time of this report, China’s demand and Vale’s weak supply guidance for 2021 is supporting the outlook for iron ore. Iron ore prices forecasts have been boosted by about 40% post Vale reporting announcing their guidance. Global vaccination gathering speed has also boosted the outlook for economic activity

The higher steel output coming from China is expected to sustain in the first half of the year. Economic activity from the rest of the world is increasing, and an increased demand from India and South East Asian countries is expected to pick up. The supply squeeze created due to Vale’s production numbers remains the key factor at this point.

China’s demand for the commodity and their steel production trend is difficult to estimate for the second half of 2021 as there has not been any news on policy guidance coming out of Beijing’s new five year plan.

How have our Mining Giants Performed?

BHP, Rio Tinto, and Fortescue Metals Group all released their earnings report for the first half of FY2021 earlier this week. As expected, the performances have been top notch amid soaring prices.

BHP reported a 17% rise in its first half profits. Record levels of iron ore production at record average concentration helped the firm cash in on high prices for the commodity. The strong operational performance resulted in very good free cash flow generation with a margin of 59%.

BHP also reported that their projects that are under development are progressing well and are on time and on budget. The firm reported a 33% jump in the realised iron ore price during the half year, compared to a year ago. Capital expenditure was US$3.6 billion.

Free cash flow was US$5.2 billion and BHP announced a record interim dividend of US$1.01 a share – up from 65 cents last year.

BHP signalled that they are bullish on the economic outlook for the remainder of the year as policymakers in key economies are committing to growth. The guidance for the year was increased by US$0.3 billion to US$7.3 billion given the strong Australian dollar and soaring iron ore prices. The FY2022 guidance remains unchanged at US$8.5 billion.

Rio Tinto is the world’s top iron ore producer and they revealed a top notch earnings report. Rio generated US$15.9 million net cash from operating activities – 6% higher than 2019. This is completely due to the high iron ore prices as the firm has been working its mines at full capacity. This resulted in US$9.4 billion of free cash flow – 3% higher than the previous year.

Capital expenditure was US$6.2 billion as the firm saw a US$700 million increase.

Rio’s EBITDA margins were 51% during the period and their underlying EBITDA increased by 13% to US$23.9 billion.

Capital expenditure was $6.2 billion – funded from operating activities. The net debt position is US$0.7 billion – a decrease of US$3 billion. The huge free cash flows has increased the strength of the balance sheet. Rio is paying a total dividend of $5.57 a share and a special dividend of 93 cents during the year. Rio’s production guidance remains unchanged for the rest of the financial year. Cap ex guidance is said to be around US$7.5 billion

Fortescue is the largest pure play iron ore producer in Australia. They have had a record half year with shipments, earnings, and operating cash flows being at all time highs. EBITDA came in at US$6.6 billion – a whopping 57% higher than the previous period. EBITDA margins skyrocketed to 71%. Net profit after tax came in at US$4.1 billion. EPS hence increased by 66% in the previous corresponding period at US$1.33.

The free cash flow generated was US$2.5 billion after FMG invested US$1.9 billion in capital expenditure. Net debt position at the end of the year was US$110 million. Fortescue is paying 80% of NPAT as dividends and the remaining 20% is to be utilised for future growth. 10% of this will be used to fund renewable energy growth. The interim dividend declared is A$1.47 per share – 93% higher than the FY20 interim dividend.

The guidance for FY2021 shipments has been increased to 178-182 metric tonnes. THe C1 cost guidance has been updated to US$13.5 – US$14/wet metric tonne. Revision of exchange rates have once again increased capital expenditure to be in the range of US$3.0 – US$3.4 billion.

The finances are staggeringly good for BHP, Rio, and FMG. It is clear that they will be operating at the maximum capacity in order to take full advantage of the soaring iron ore prices. These stocks have largely been dividend stocks and are a part of most investor portfolios in Australia. The soaring prices have increased earnings potential and these stocks have delivered impeccable performances in stock prices as well. The bull run for iron ore is expected to continue and exposure to Rio, BHP, and Fortescue stays vital!