Their organic growth strategy will increase revenues, reduce costs, and ultimately increase their earnings by about $15-$20 million. The already high dividend policy will thus further be boosted. A "Buy" from us

SIQ is one of Australia’s largest employee management services companies handling over 360,000 customers and 90,000 vehicles in both novated and fleet modes. PBI non-health comprises 43% of the company’s customer base that includes national, state, and local based aged care, disability care and charitable organisations.

The company works with Australian businesses to simplify salary packaging, novated leasing, fleet management, share plan administration, and payroll services, as well as assisting hospitals with labour optimization. With the company’s expert consulting and powerful workforce management software, they have managed to save some of Australia’s leading hospitals millions of dollars by reducing the hospital staffing costs. SIQ operates in the not-for-profit, private, corporate, healthcare, education, and government sector.

The three business divisions in which the company operates are Outsourced Administration (OA), Vehicle Services (VS) and Software, Distribution, and group services (SDGS). 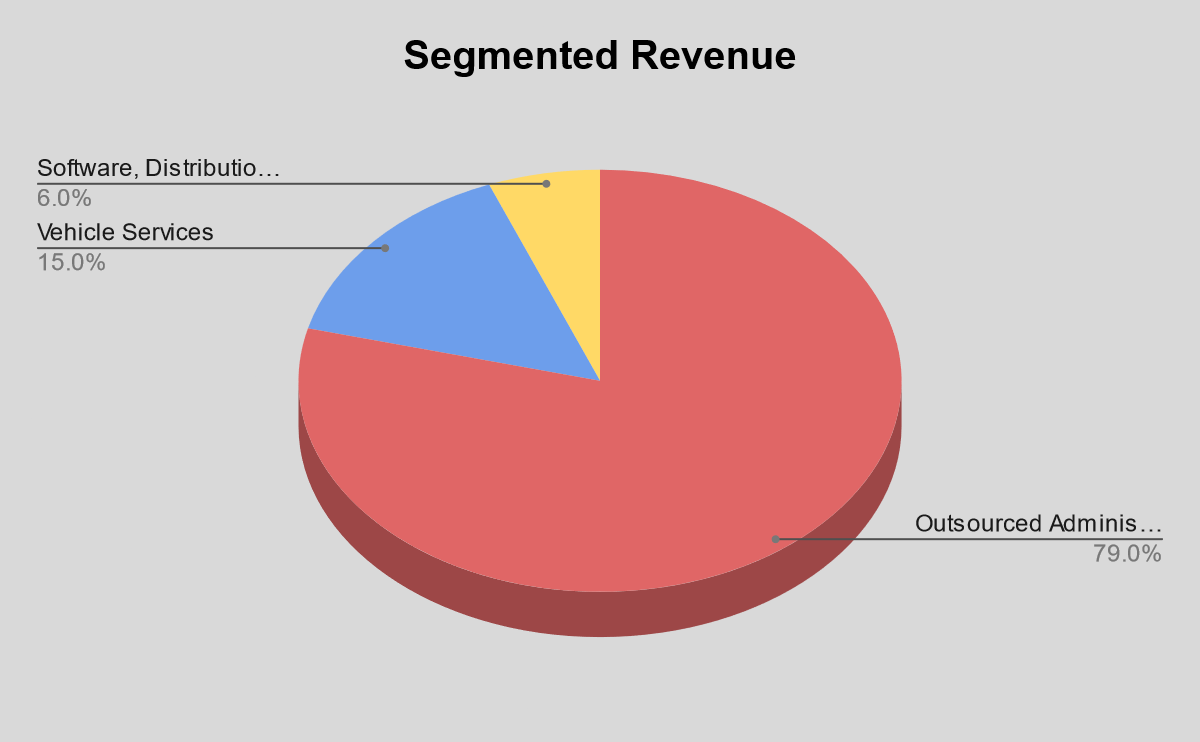 The company’s OA segment is the highest revenue generating segment, contributing 79% of the total revenue. The SDGS segment contributes 15% of the total revenue and VS segment contributes 6% of the company’s total revenue. The company’s OA segment on behalf of its employers, arranges and administers outsourced pay packaging and fleet management services. This segment also includes novated leasing where employees lease a car from their employer and pay off the loan with pre-tax dollars. As a result, taxable income is reduced, and tax owed to the ATO is reduced as well. Salary packaging and novated leasing are the major services driving the OA segment revenue. The OA segment has been growing at an average rate of 13% since the last 4 years.

SIQ is one of the leading providers of outsourced salary to the not-for-profit sector. The company works with almost two thousand corporate organisations to manage their employee salary packaging and novated leasing programs, fleet requirements and employee share plans. SIQ generates revenue by administering these packages on behalf of the employers who are offering these services. The company is also trusted by Australia’s Department of Defence and Australian Taxation Office.

The company’s long-term relationship with its clients is the key strength of the business. They typically have long term contracts with 3–5-year average tenures. This means their revenues are very sustainable.

While the share price has outperformed the ASX 200 in the past year, the degree of volatility has been high. The company saw significant movement in its share price during the last few months on ASX, rising to highs of $7.77 and falling to the lows of $5.95. The company is currently trading at $6.78.

At the peak of the crisis in 2020, Smartgroup shares were a mixed bag. New vehicle sales in Australia declined and most vehicle owners began refinancing existing leases and this affected Smartgroup directly. The salary sacrificing segment was far more resilient given that it caters to medium-to-high income earners. Investors were left unsure due to these reasons and SIQ shares were out of favour during the year. By the end of November and early December 2020, Smartgroup shares once again were upbeat. The firm announced that their second half of the year was stronger than the first. Management commented about seeing a positive trend in the new vehicles and further growth to its salary sacrificing business. 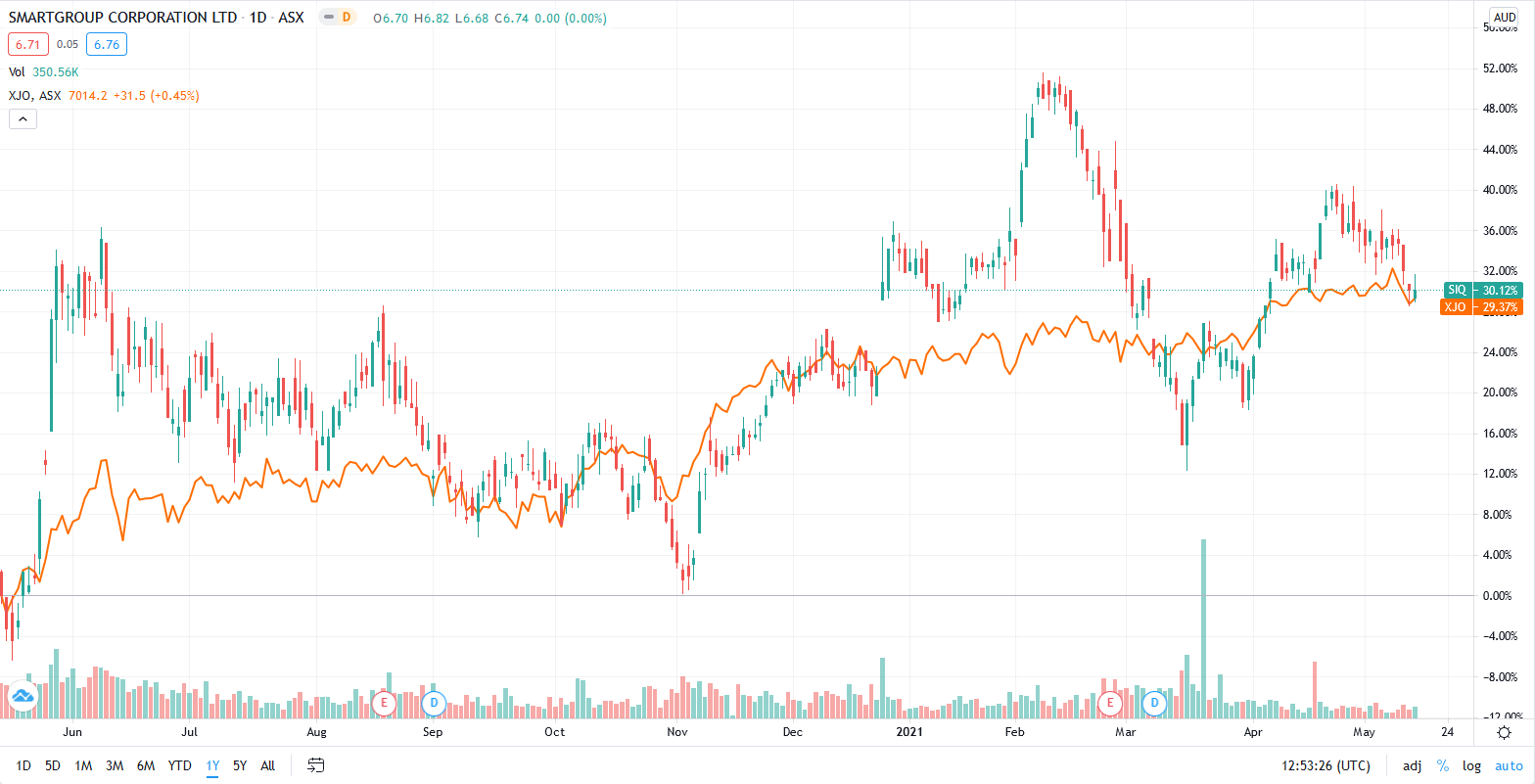 Smartgroup also provided guidance for EBITDA and repaid their corporate debt. This resulted in SIQ shares going on an upward trend right until mid-February 2021.

The Australian Taxation Office (ATO) offers fringe benefits tax (FTO) exemptions to groups such as charitable institutions and not-for-profit organisations. This has resulted in SIQ’s being one of the leading providers of outsourced salary to the not-for-profit sector. The company also serves government bodies and hospitals.

Salary sacrifice is a technique used by middle to high income earners. Within Smartgroup’s existing client base, there are about 1.2 million to 1.5 million employees. This is the total addressable market for the salary sacrifice segment. Smartgroup currently has a market share of 24% having acquired about 360,000 customers.

Of these 1.5 million employees, the total cars owned by them is in the 900,000 to 1.2 million range. Smartgroup currently has a market share of just 5% in the novated vehicles market. There is significant room for growth for the firm and lots of market share is still on the table. 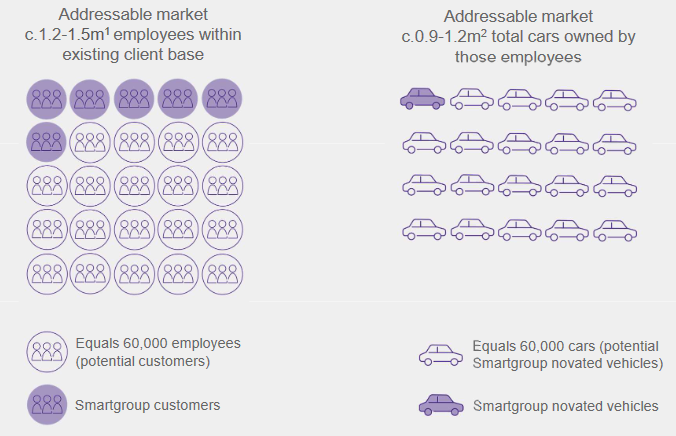 Given the high unemployment rate and the car sales decline that persisted throughout 2020, Smartgroup endured a rough year growth-wise. However, their salary packaging business remained resilient. Smartgroup renewed all their top 20 client contracts that were due to expire in 2020. The firm has demonstrated an ability to consistently hold on to their clients. There are 2 reasons for this: Firstly, Smartgroup has an edge over their competitors in the customer service department. Secondly, their service is catered to the middle to high income earners, that is, employees whose job security is less volatile.

We saw a net organic growth of 1500 packages during the year. Smartgroup onboarded new health in late 2020 when Australia’s economic recovery began. They are known to have signed up 3500 new packages in late 2020 for 4 government departments.

40% of the revenue that Smartgroup generates comes from their top 20% clients. They are also diversified across different sectors. Charities and/or not-for-profit organisations, government, and hospitals make up 86% of their revenues.

Smartgroup’s revenues were growing by around 17% until 2018. The growth in the following year did slow down as the firm reported just a 3.3% growth, and by 2020 with all the effects the pandemic had decreased it by 13%. Adjusted EBITDA margins have a similar trend as well. They grew until 2018 and peaked at 48%, however, it has been on a downward trend again. Currently, they sit at 44% and we expect the numbers to go back up in FY2021 as the company and the economy recovers from the pandemic’s effects on unemployment.

The firm has had a positive start to FY2021 as well which has been in line with expectations. At the Macquarie conference, Smartgroup did offer insight into how they have begun the year. New contracts have been added from the health sector – translating to about 8500 packages. Renewals are also in progress for their largest client, and a multi-year contract was renewed for a long-term government education client. Salary packaging customers are up 12,000 since December 2020.

Smartgroup is implementing what they are calling “The Smart Future” program where they are investing to grow organically. They are migrating to a redesigned cloud-based software that will be streamlined towards achieving business automation. This means that SIQ’s platform will become more technologically advanced to gain an edge over its peers. Customer experience and digital investments has and will continue to underpin their strategy and the program once fully implementable is expected to result in operational and financial benefits. Smartgroup is known to be targeting:

Therefore, considering these factors, we expect Smartgroup’s revenues to grow by an average of 5.2% over the next two years. Once the Smart Future program is complete, we will see a lift-off given their product superiority and see them gain further market share – growing revenues by 9%. Earnings on the other hand is expected to be back up to margins of 45% this year. This estimate is in line with the levels seen prior to the pandemic, that is FY2019. Given the increase in operational efficiency this program looks to be targeting, the EBITDA uplift of $15 million has been considered in FY2023. Based on these conservative estimates for top line revenue growth, the forecasts are as seen in the below chart: 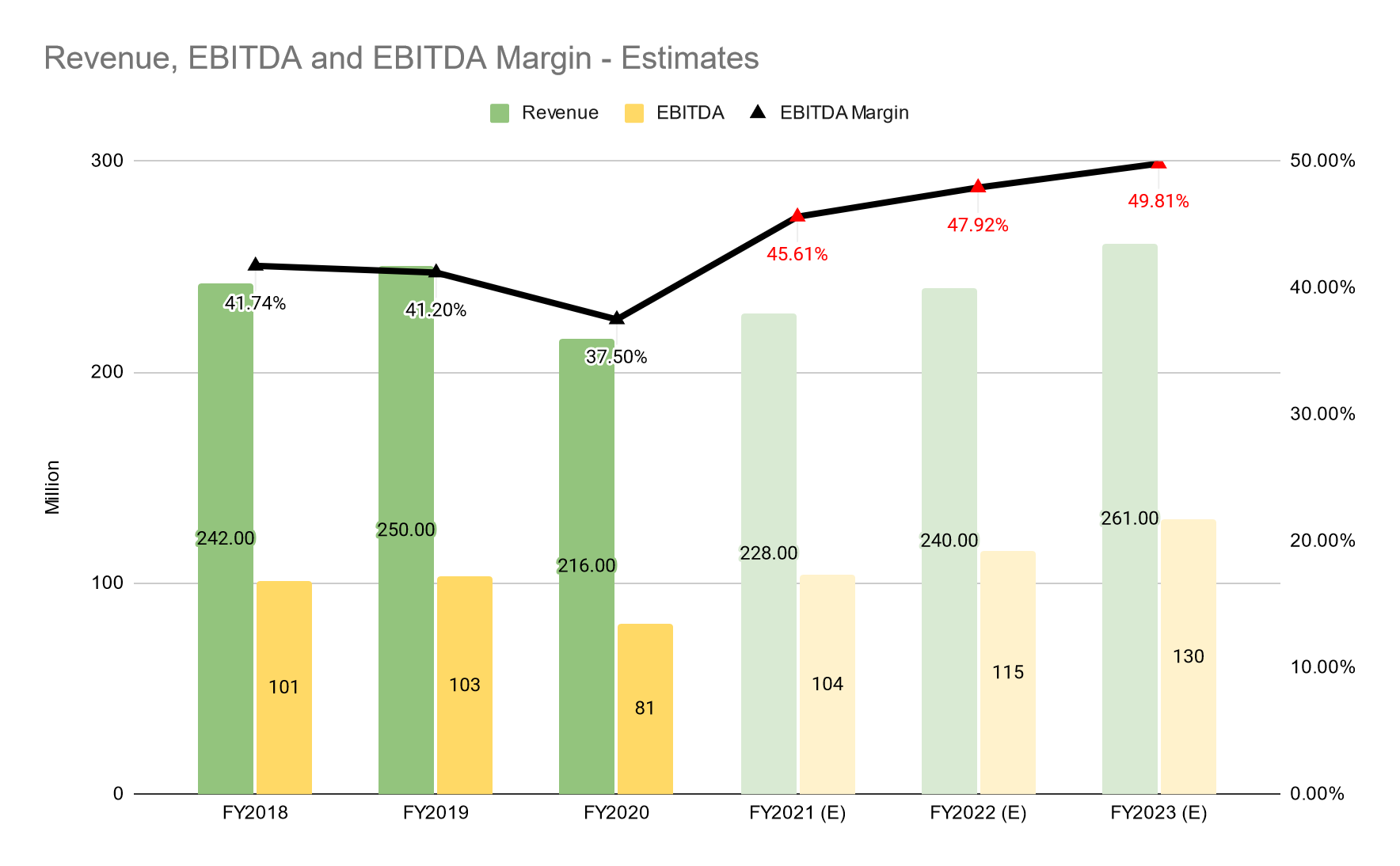 Smartgroup’s cash balance has decreased from $40 million to $27 million in the latest financials. However, they have significantly paid down their debt. Borrowings decreased from $60.4 million to $24.7 million – de-risking the firm as it now sets itself to invest for organic growth. Smoother operations also resulted in additional cost saving of $4 million. The financial strength has thus increased considerably. With close to just $25 million of debt on their balance sheet, and a projected Net Profit after Tax of $70 million in FY2021, they are in a position of strength.

Dividends are very strong. Smartgroup has maintained a very high dividend pay-out ratio. Despite the challenges in 2020, they paid out a dividend higher than their basic earnings per share. In the past year, SIQ has paid a dividend of about 17 cents a share each as their interim and final dividend. A special dividend of 14.5 cents a share was also paid out at the end of the year.

Growth has been steady and Smartgroup being one of the best players in the industry and offering a must have service for middle to high income owners, they are positioned optimally to grow along with the economy. The growth program being implemented is expected to result in higher EBITDA – and in all probability translating to higher dividends once fully operational. Either way, the dividends are really the strong point here! 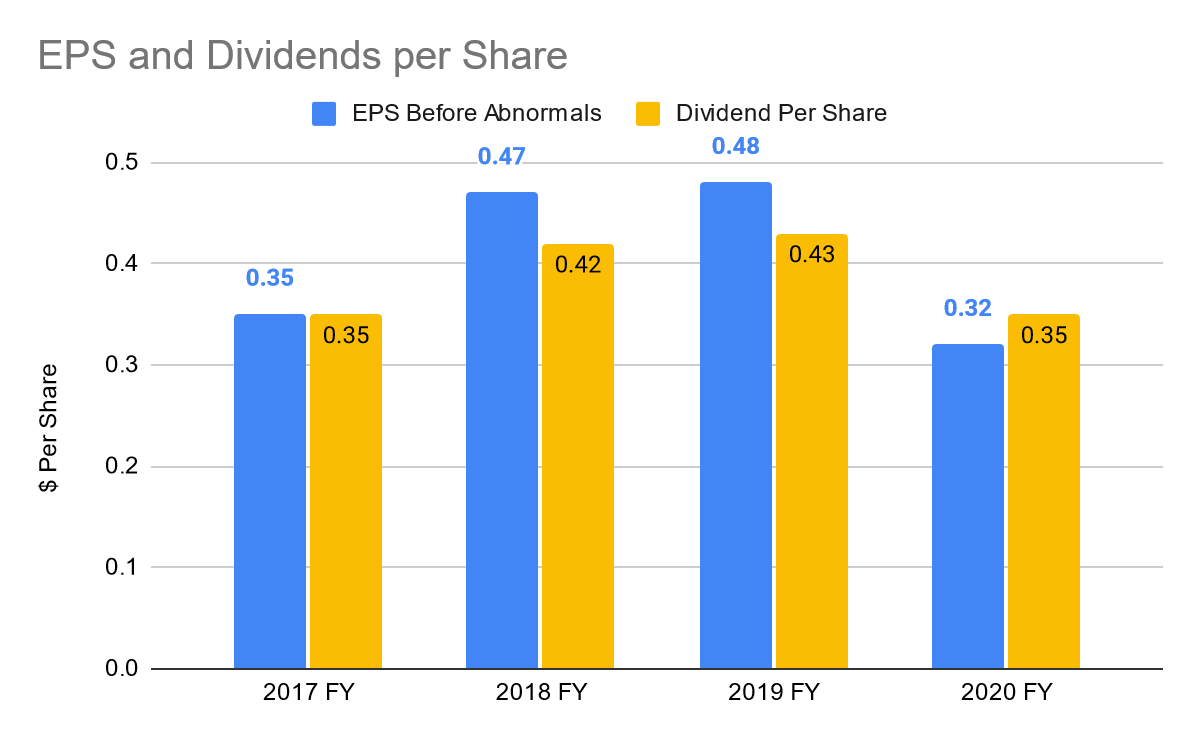 Valuations are modest. Based on the forecasts made earlier and the current market capitalisation, Smartgroup is an exceptional dividend stocks with over a 5% annual yield (excluding special dividend), and that is trading at multiples pf just 13x Forward FY21 P/E and 9x EV/EBITDA. Very conservative multiples based on how lofty valuations have been recently. Fast-forward a couple years, we see the P/E drop down to 11.8x and EV/EBITDA of 8x – again signifying that the stock is fairly cheap compared to some of the dividend stocks, let alone the growth stocks.

Smartgroup is the best player in the salary sacrifice industry that will become resilient as unemployment further declines. Their organic growth strategy will increase revenues, reduce costs, and ultimately increase their earnings by about $15-$20 million. The already high dividend policy that yields over 5% annually will thus be boosted further. We recommend long-term investors to “Buy”.