Liontown has a top quality resource and is producing arguably the hottest commodity in the world. We recommend investors to "Buy".

FY20 was a positive year for Liontown despite the COVID-19 pandemic which had impacted the global economy and therefore on LTR’s operations. During FY20, the company achieved several key milestones and made excellent progress towards achieving its strategic plan to becoming a key player in the lithium mining industry.

Liontown published back in Q4-FY19 a Pre-Feasibility Study that revealed early insights into a massive economic potential in the project and given the considerable increase in the size of the lithium deposit and the delineation of high-grade mineralisation at depth, the company is expected to release a new Pre-Feasibility Study and planned project completion by Q4-FY21. With the proposed development of Kathleen Valley to a standalone mining and processing operation, Liontown is poised to be one of the first of the next generation of hard rock lithium producers aligned with the forecast resurgence of the lithium-ion battery sector in the coming years.

In FY20, Liontown has completed a maiden Mining Research Establishment for its 100%-owned Buldania Lithium Project, located near Norseman in Western Australia’s south-eastern Goldfields. There is significant potential for further lithium discoveries within Liontown’s large land position at Buldania, which is mostly unexplored for lithium outside of the Anna pegmatite. Liontown exhibits massive production capabilities while combining the Kathleen Valley and Buldania project which represents the world’s 4th largest hard rock lithium resource base by ownership, which is an outstanding achievement and a tangible measure of the potential value of the Projects and growth potential for the company.

Liontown exhibits solid financial positions. The company has shown its ability to navigate with prudence and discipline during this period of this challenging economic climate by streamlining its spending to the essential development of its two most promising projects, Kathleen Valley and Moora. Liontown maintains strong development momentum in 2020 to bring the Kathleen Valley Lithium Project closer to realisation as a future world-class lithium mine. Consensus forecasts indicate that the lithium market will reach a supply and demand balance in 2022 with a potential shortage in 2023. The lithium market outlook is broadly positive in the long-term, particularly given the ongoing global shift towards electric vehicles from large automakers. This outlook is boosted by supporting government policies in China and Europe which both have national and local subsidy schemes in place. China and Europe have recently strengthened and extended their New Energy Vehicle mandate and CO2 emissions standards, respectively. Liontown growth strategy remains focused on expanding its lithium production capabilities along with the development of electric vehicles. 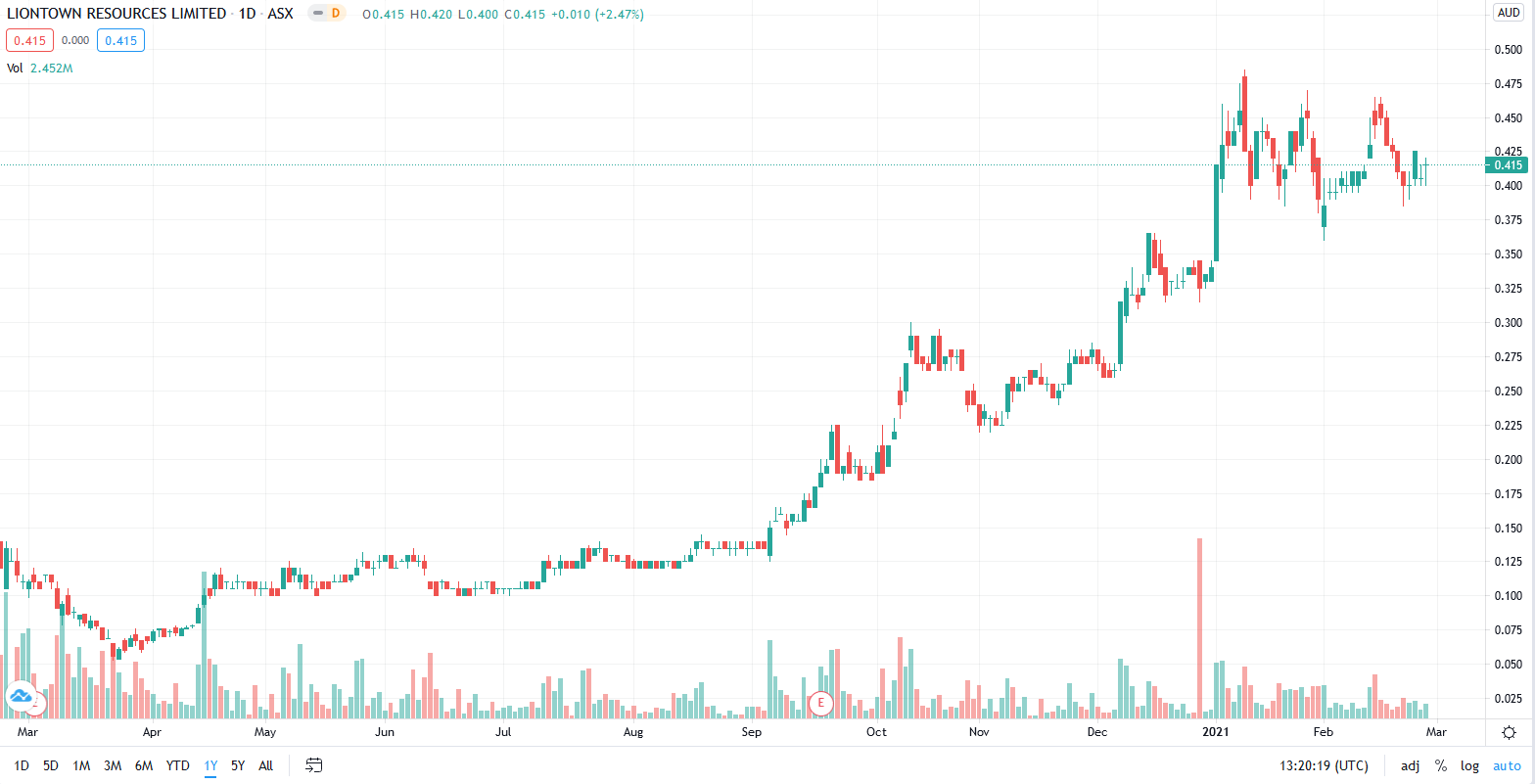 The Liontown share price really took off back in September 2020 when the firm released their FY2020 earnings. Since then, the stock has quite quickly surged! The stock returns are as follows:

Liontown is rapidly progressing the Kathleen Valley Lithium deposit towards a new mining and processing operation in Western Australia. The definition of an updated Mining Research Establishment during FY20, comprising 156M tonnes at 1.4% Li2O and 130ppm Ta2O5 has confirmed the resource as one of the most significant, high quality, hard rock lithium deposits in Australia. Liontown is expected to release a new Pre-Feasibility Study and planned project completion by Q4-FY21 to tackle the rising demand in the global market for lithium-ion batteries. Demand growth continues with consensus forecasts anticipating exponential growth in battery demand driven by high environmental targets and incentivised transition to electric vehicles. Liontown is well-positioned to become a significant source of lithium supply just in time to meet this demand which is expected to escalate in the next few years.

Consistent with its corporate strategy to focus on battery and precious metals, Liontown will also continue to advance the Moora Gold-PGENickel-Copper Project in south-west Western Australia where early work has defined strong geochemical anomalism coincident with geophysical features. The Moora Project is largely unexplored with little historic work conducted and initial drill testing by Liontown is scheduled for early FY21 following completion of further target definition.

Liontown has demonstrated the ability to maintain strong financial positions during the current uncertainties caused by the COVID-19 pandemic and its impact across global financial markets. The company remains focused on the development of its two most promising projects, Kathleen Valley and Moora. Liontown continues to maintain a strong development momentum in FY21 to bring the Kathleen Valley Lithium Project closer to realisation as a world-class lithium producer in the coming years. Liontown plans to grow along with the lithium market, which is expected to be positive in the long-term, particularly given the ongoing global shift towards electric vehicles from leading automakers. China and Europe have recently increased and expanded their New Energy Vehicle mandate and CO2 emissions standards, respectively. That is a considerable opportunity for Liontown which remains focused on expanding its lithium production alongside the development of electric vehicles.

Most of the lithium demand comes from the battery sector, and even though demand for Electric Vehicles (EV) was negatively impacted in the first few months of FY20, the Electric Vehicles revolution is a trend that, together with energy storage, seems to be unstoppable. According to Fast markets (2020), the total vehicle sales in China are on the upturn with EV sales trending at a much faster pace reaching record number year-over-year.

EV sales are projected to continue to expand into FY21 as more EV models are released and according to the trend in consumer demand experienced during Q3 and Q4-FY20, EV sales may rise to 46% year-over-year.

For the fiscal year ended 30 June 2020, Liontown Resources revenues decreased by 63% to A$ 1K. Net loss increased by 1% to A$ 12.8M. Revenues reflect a decrease in demand for the Company’s products and services due to unfavourable market conditions. Higher net loss reflects Exploration/Dry Hole Exp (Incl Write Off) increase by 12% to A$ 11.2M (expense), Share-based payments increase from A$ 564K to A$ 1.4M (expense).

Liontown reported a net loss from continuing operations of A$ 12.8M for FY20 which is comparable to the net loss of $12.7M in FY19. Exploration and evaluation expenditure increased by A$ 1.2M which was offset by A$ 1.5M in income receivable from Core Lithium Ltd. as the conditions of the sale agreement of the Bynoe Lithium Project, entered in 2017 were fulfilled.

Cash and cash equivalents on 30 June 2020 were A$ 5.3M compare to 2019 A$ 3.4M, up 55% year-over-year. The net increase in cash of A$ 1.9M is primarily due to the proceeds of A$ 18M received from placement of 150,000,000 fully ordinary shares, offset by an increase in exploration and evaluation expenditure payments and final payment for the acquisition of the Buldania Reserve and Production Royalty.

In FY20, Liontown successfully raised A$ 18M via a placement of 150M fully ordinary shares at an issue price of A$ 0.12 per share, including A$ 1.43M placed to Directors. The proceeds are committed to advance project development.

After year end, Liontown received A$ 1.5M in cash from Core Lithium Ltd. The payment relates to the contingent consideration according to the Sale Agreement Liontown entered with Core Lithium Ltd. in FY17 for the sale of the Bynoe Lithium Project in the Northern Territory.

Liontown revenue remains inexistent however, the company exhibits strong discipline in maintaining a strong balance sheet and an optimal capital structure mix with liabilities under control which give us confidence in the company’s projects. The company’s projects are advancing according to the strategic plan and are expected to start production in the coming years in line with the increasing demand for lithium. 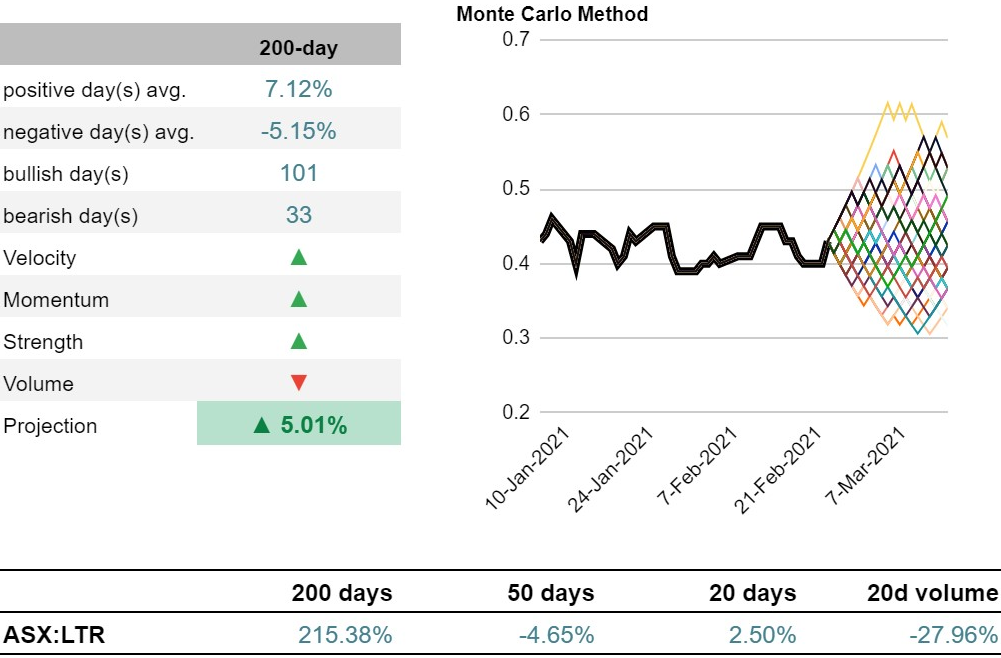 Liontown surge impressively since the lows induced by the COVID-19 peak sell-off during March 2020 and rallied by more than +600% and is now consolidating near its all-time high reached on January 11, 2021. In FY20, Liontown successfully raised A$ 18M through placement of 150M fully ordinary shares at an issue price of A$ 12 cents per share which contributed to a breakout above the early resistance formed since February 20, 2020, near the A$ 15 cents per share. LTR has some tremendous support around the A$ 32.5 cents level which coincide with the 38.2% Fibonacci level from the swing high of March 2020 low to January 2021 all-time high. Liontown price action is currently trapped in a consolidation area that ranges from A$ 38 cents and $A 48.5 cents per share.

LTR is currently evolving in a 26% price range between A$ 38 cents and A$ 48.5 cents. There is ample support right below the current market price at 38 cents which there might be buyers looking to add up to their long positions. The near-term resistance is the 48.5 cents level, which is a clear breakout occurs may send the price toward A$ 50 cents and A$ 1.0 eventually.

Volume decreases since the last 200-day with the 20-day volume average down by -27.96%. The price action remains neutral in the near-term, evolving in a range between A$ 38 cents and 48.5 cents per share. 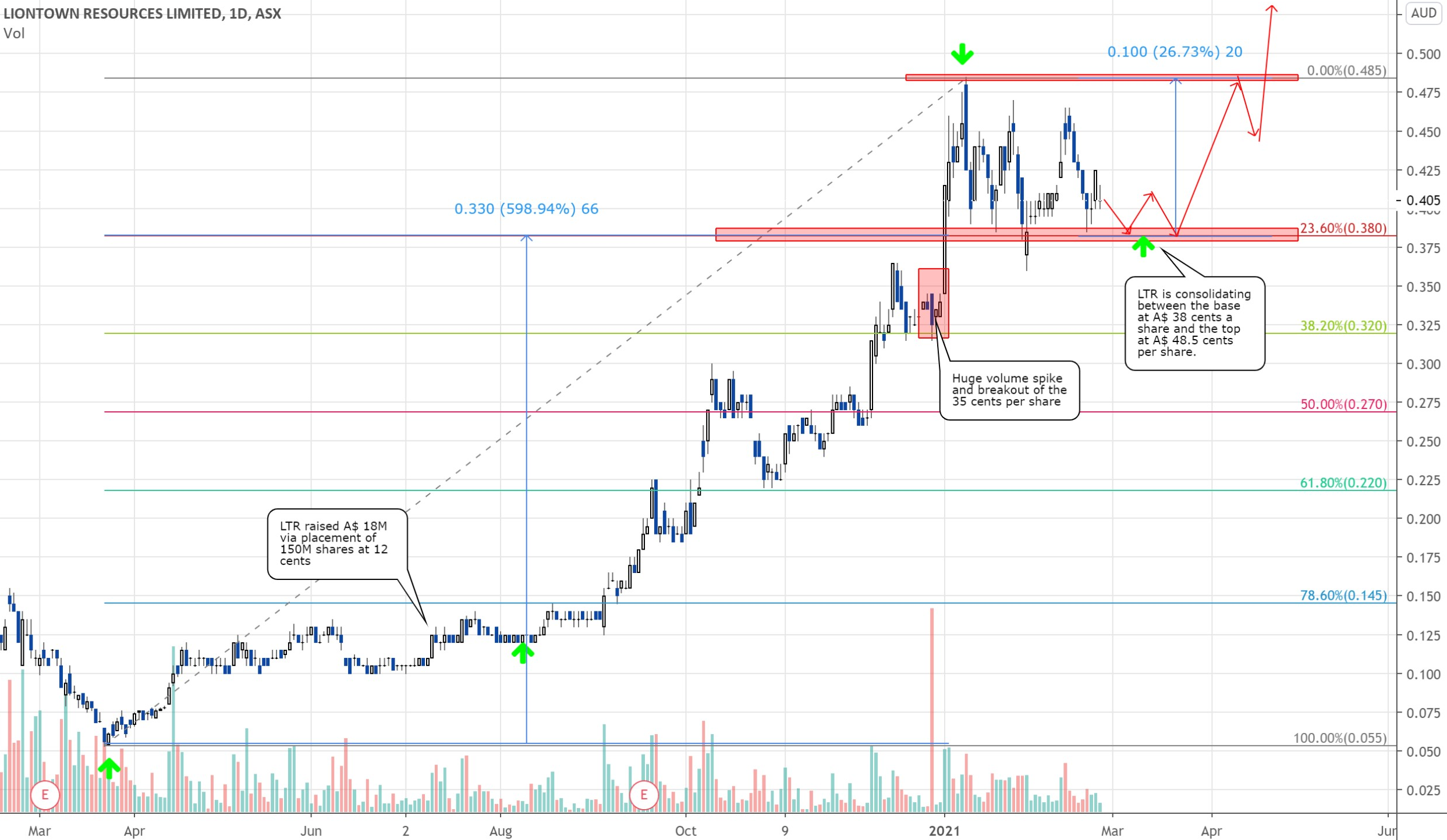 Top class projects producing highly sought after commodities that are essential to the future. We are issuing a speculative “Buy” recommendation on LTR for long-term investors. In the short-term, as we expect the price of LTR to continue to get trapped in a consolidation before heading above A$ 50 cents per share which will trigger a rally all the way up above A$ 1.0 per share.