BrainChip is close to commercialisation deals for its breakthrough technology. We recommend a 'Buy'.

BrainChip Holdings (ASX: BRN) is a global technology company producing a ground-breaking neuromorphic processor that brings artificial intelligence to the Edge in a way that is beyond the capabilities of other products. The chip is high-performance, small, ultra-low power, enabling a wide array of edge capabilities, including on-chip training, learning and inference. The event-based neural network processor is inspired by the spiking nature of the human brain and is implemented in an industry-standard digital process.

By mimicking brain processing, BrainChip has pioneered a processing architecture called Akida, which is both scalable and flexible to address the requirements of edge devices. At the Edge, sensor inputs are analysed at the acquisition point rather than through transmission via the cloud to a data centre. Akida is designed to provide a complete ultra-low power and fast AI Edge Network for vision, audio, olfactory and smart transducer applications. Reducing system latency provides faster response and a more power-efficient system that can reduce the large carbon footprint of data centres.

We know this company quite well by now, and we have recommended it a few times since beginning coverage in 2020 at $0.32 a share. Most recently, we recommended members Sell BrainChip at the beginning of the year at a price of $1.40 a share.

While we were always believers in BrainChip’s technology and the company’s potential, we noted back in January 2022 that the BRN share price had priced in a lot of speculation and that it had got ahead of itself. The valuation did not make sense, and we noted that BRN shares would reverse their trajectory once interest rate hikes began. 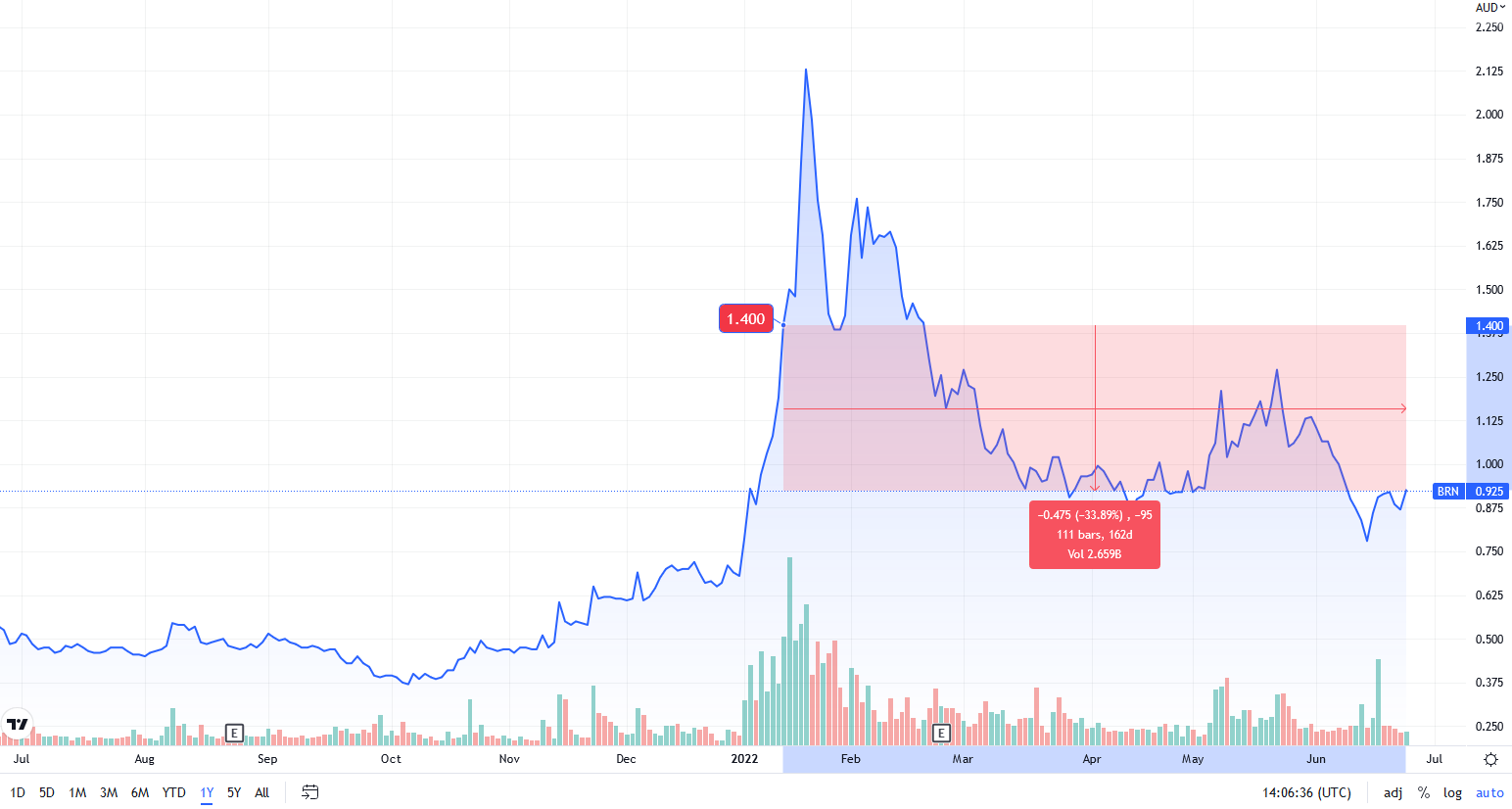 At current price levels, as we can see from the chart, BRN shares have retracted by ~34%. Our analysis now points towards this current price range as a good opportunity to enter positions again.

Despite multiple global challenges, 2021 and 2022 year-to-date has proven to be the most successful year in BrainChip’s history on the strength of the company’s many technical and market developments and an increase in worldwide interest in Artificial Intelligence.

Most significantly, it was the year BrainChip evolved from an R&D company into a company that supplies breakthrough edge AI technology to markets like automotive, transportation, aerospace, healthcare, and industrial IoT.

BrainChip’s manufacturing partners, Socionext America and Taiwan Semiconductor Manufacturing Company (TSMC) shipped their first production chips and, in April 2021, commenced preparing to manufacture at volume. In addition to this progress in silicon, BrainChip licensed the Akida intellectual property to Application Specific Integrated Circuit (ASIC) industry leader MegaChips to incorporate into next-generation AI devices. During 2021, ten new international patent applications were filed, and four previously filed patents were granted. Two more received an ‘allowed’ status in the United States and were subsequently granted in early 2022. Over the rest of 2022 and onwards, BRN is expected to increase their patent portfolio significantly.

In the recently ended quarter, that is, March 2022, BrainChip continued our drive to full commercialisation and global expansion of its Akida neuromorphic IP and computing platforms. From expanding international patent rights to producing commercially available PCIe boards to entering new global markets, BRN extended the reach of their technology and their status as a leader in enabling the efficient procession of all sensor modalities to support continuous learning and inference at the Edge.

Three key appointments were made during the quarter: Mr Antonio J. Viana was appointed Chairman of the Board of Directors, Ms Pia Turcinov joined as a Non-Executive Director, and Mr Jerome Nadal joined the Company as Chief Marketing Officer to help the company continue its path to commercialisation and profitability.

Jerome Nadal is perhaps the most important appointment among them. He is an internationally experienced executive in scaling and growth-stage companies. Mr Nadel will drive corporate and product marketing to support the full commercialisation of its Akida neuromorphic computing platforms.

BrainChip continued to expand the commercial reach of its Akida neuromorphic computing platforms in new geographical territories in the EMEA via expanded and formalised partnerships with Eastronics and SalesLink. Relationships with local and regional technology solutions providers and sales professionals represent an effective way to grow the global market for the Company’s IP across a wide range of applications – from industrial IoT and autonomous vehicles to smart sensors that can detect and act on visual features, sound, touch, smell and taste.

In the coming quarter, BrainChip is focused on securing additional strategic partnerships for incorporating Akida chips as part of our customers’ technology offerings as well as through sales engagement in key markets worldwide.

Following the company’s launch of the American Depositary Receipt (ADR) program in November 2021 as a way to attract US institutional investors, BrainChip announced on 3 February 2022 that its ordinary shares had been approved for eligibility by the Depository Trust Company (DTC), making it possible to settle trades electronically in the United States among broker/dealers and the Company’s US transfer agent.

During the March quarter, BrainChip received notification from the US Patent and Trademark Office of various patents and trademarks due to the company’s efforts to protect BrainChip’s intellectual rights. The company’s patent portfolio comprises eight patents granted in the US and one patent granted in China, with a further 22 international patent applications pending in the US, Europe, Canada, Japan, Korea, Australia, Brazil, Mexico and Israel.

The company remains focused on pursuing and maintaining patent protection on all current and future developments across multiple global jurisdictions to retain its technological Edge over the growing number of competitors in the Edge AI space.

BrainChip reported net operating cash outflows of US$5.0M vs.US$3.4M in the prior period. Receipts from customers for the quarter were US$0.2M, a decrease of 81% from US$1.1M in Q4-21.

Payments to suppliers and employees were up quarter-on-quarter, totalling US$5.3M (Q4-21: US$4.9M). This increase was primarily driven by increased marketing and branding expenditures; US$0.5M final milestone payment to Socionext for the production of the Akida device (Q4-21 US$1.0M); additional licensing fees, and increased corporate costs resulting from increased shareholder activity.

Cash used for operating activities includes payments to BrainChip’s Board of Directors totalling US$290,000, as noted in item 6.1 of the accompanying Appendix 4C, comprising directors’ fees for Non-Executive Directors and salaries for Executive Directors.

BrainChip ended the quarter with US$31.2M in cash compared to US$19.4M in the prior quarter. BrainChip currently has a comfortable level of cash which is more than sufficient in our opinion to support the ongoing operations for the next two-year period. We have also seen good management in terms of working capital.

With high market volatility and interest rate hikes, raising money will become harder, and it particularly affects young companies as their Cost of Equity increases. BrainChip, with its large cash balance, is not expected to raise capital any time soon – which puts the company in a good position going forward.

Our earlier report on BrainChip can be viewed by clicking here.

BrainChip has progressed on the commercialisation leg of its business operations. Couple this with BrainChip’s differentiated IP product, and we see that the firm is delivering a proven and exponential improvement on anything else available in the market. The next few months in the remainder of this year focuses primarily on commercialisation deals – all of which will be a catalyst for the share price. BrainChip has a very healthy cash balance that should take it through operations for the next couple of years. At retracted price levels, BRN shares are trading in a range around their intrinsic value. We upgrade our recommendation to a ‘Buy‘.