The stock has been subject to volatility in the recent weeks. However, we still hold out a "Buy" recommendation at this price.

BrainChip Holdings Limited (ASX: BRN) is a technology company that develops neural processors for Edge AI applications. The company’s credit goes into developing a solid-state architecture that resembles the neuron in the human brain. It has assembled 1.2 million of these neurons accompanied by synapses on a computer chip named Akida NSoC. The technology processes events or spikes instead of the conventional data.

The technology, known as the Spiking Neural Network (SNN) is much faster and consumes only a fraction of power while processing events compared to traditional technologies processing data. The company expects to commercialize the technology at a considerably lower price point. The company is involved in multiple pilot projects involving Akida and its software based SNN which is known as the BrainChip Studio. Additionally, the company has a large number of design wins and more than 500 commercial prospects for its solutions.

In a nutshell, BrainChip’s Akida processor is capable of replicating the human brain. The stock has been associated with a lot of press and media attention in recent months as it has signed with global players for early adoption of its Akida processors.

Akida is expected to have 3 revenue streams. The company is expected to selectively license its IP associated with Akida to other players in the semiconductor industry. These licensing revenues will be non-recurring in nature.

Once the licensing is completed and customer’s transition into commercial production, royalties will be paid to the company by chip manufacturers for each chip they sell which includes Akida IP. These royalties are a percentage of the selling prices and will be recurring in nature.

Forecasting revenues for the company however would be highly speculative at this stage as the timing of new client wins is almost not possible to forecast, both for Akida product suite and BrainChip Studio. The valuations that swing investors are driven by relative pricing for companies similar to BrainChip during merger & acquisition deals.

Artificial Intelligence works through analysing large amounts of data that has been gathered on a subject to find patterns and successfully make predictions based on what has been learnt in the past. This processing of data happens at data centres due to the demands of size, density, and power required to carry out the tasks. The goal has always been to move the processing to the place where the data is created. This will allow the technology to be quicker and more efficient to perform tasks just as a human would. This processing of information and analytics at the source is known an Edge AI.

BrainChip’s AI neural processor – Akida looks like is the answer to this problem. The product is characterised by high efficiency and ultra-low power consumption. Akida can work with the memory that is built into the chip, without any external support and it is believed to be the next step in the evolution of artificial intelligence.

Edge AI has benefits such as lower power requirements, lower workloads, and lower costs to analyse data since machine learning can occur at source without the need for data centres. Edge AI will bring benefits such as high responsiveness, better security, and better overall experience to the users. Edge AI is no longer in a proof-of-concept stage. Your iPhone supports face unlock to unlock your phone by analysing your face at the source. The data required to match your face stays on your phone – enhancing the security, and also the time required to unlock your phone.

Some of the industries that may see massive applications of Edge AI are:

Interviews with the CEO – Louis DiNardo have revealed that Brainchip is focussing on the Smart Health and Autonomous Vehicle industries at this point. 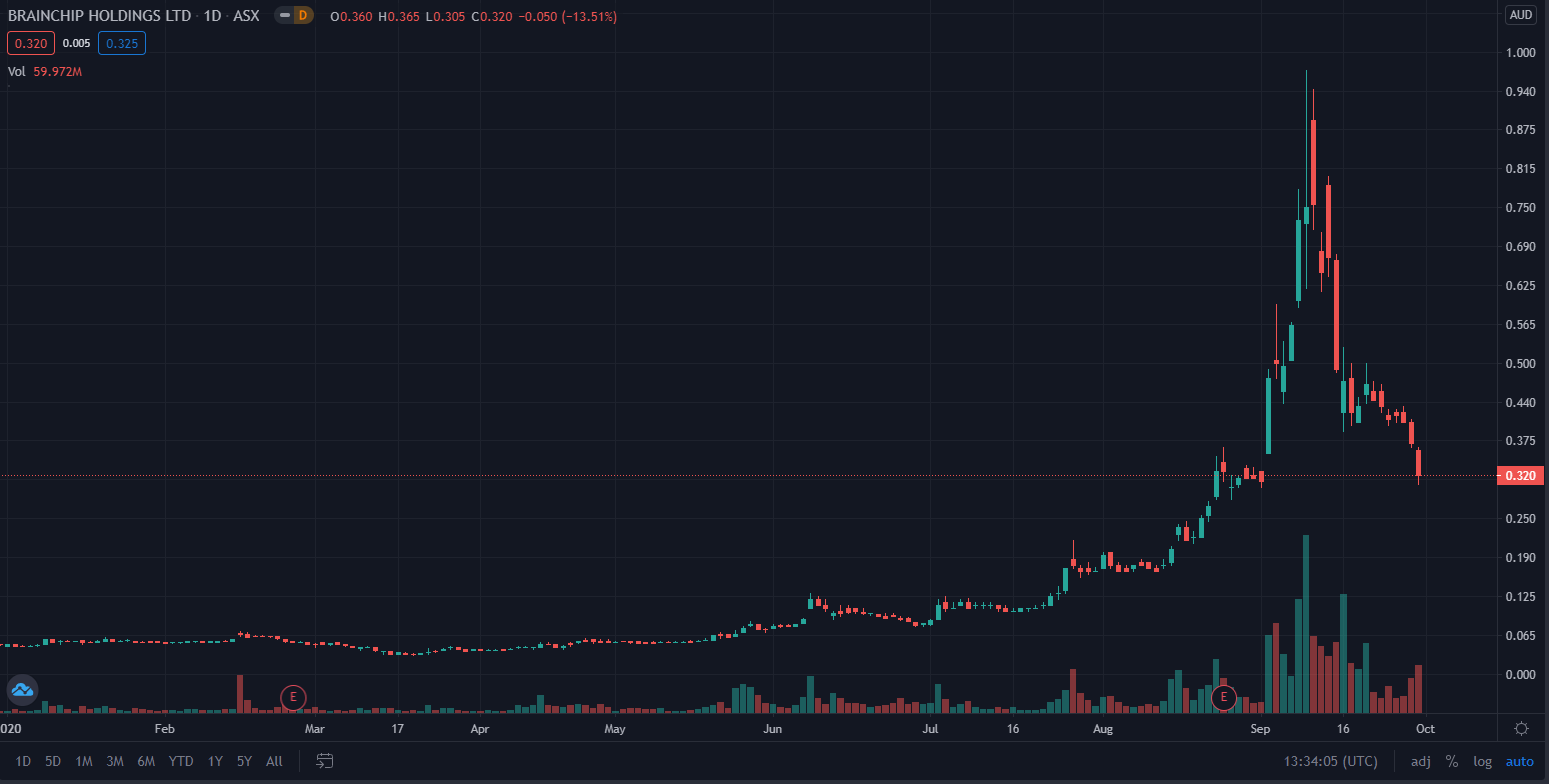 The last one month has been a mixed bag for BrainChip investors. The Brainchip stock surged over 200% to an all-time high of $0.97 and has since declined all the gains made in the month of September. Currently, it is trading at $0.32, just as it did on the 1st of September 2020.

The Brainchip Holdings share price surges were on the back of 2 huge announcements – The partnership with Japanese firm Magik Eye to produce 3D sensors and partnership with Vorago Technologies to collaborate on a Phase 1 NASA program. These two announcements somewhat reassured investors regarding the potential for the technology BrainChip is developing. This coupled with the momentum of the tech rally in global markets carried the stock to sky high valuations. The high did not last long though as the stock has declined since and essentially lost all its gains. The announcement regarding the validation of Akida did not stop investor moods from declining and the sell off continued. Most recently, BrainChip announced the establishment of a software development centre in India to support the development of Akida through software and firmware.

Volatility such as this is associated with pre-revenue high technology companies as investors are edgy, exposing the stock to swings in mood and momentum. However, we believe the current stock price does provide an opportunity to investors looking for exposure to BRN on the long-term. We believe in the potential and the total addressable market that sits before BrainChip and continue to tell our members that Brainchip is a good “Buy”.