A speculative buy on a very early stage company with high prospective assets.

88 Energy Ltd. (ASX: 88E) is an Australia-based exploration company. The Company is engaged in oil and gas exploration. Its projects include Project Icewine, Yukon Leases and Project Peregrine. The Project Icewine has approximately 480,000 contiguous acres in onshore Alaska. Project Icewine has both unconventional and conventional oil potential. The Yukon Gold leases are located on the eastern border of the Central North Slope of Alaska. Project Peregrine has approximately two prospects. 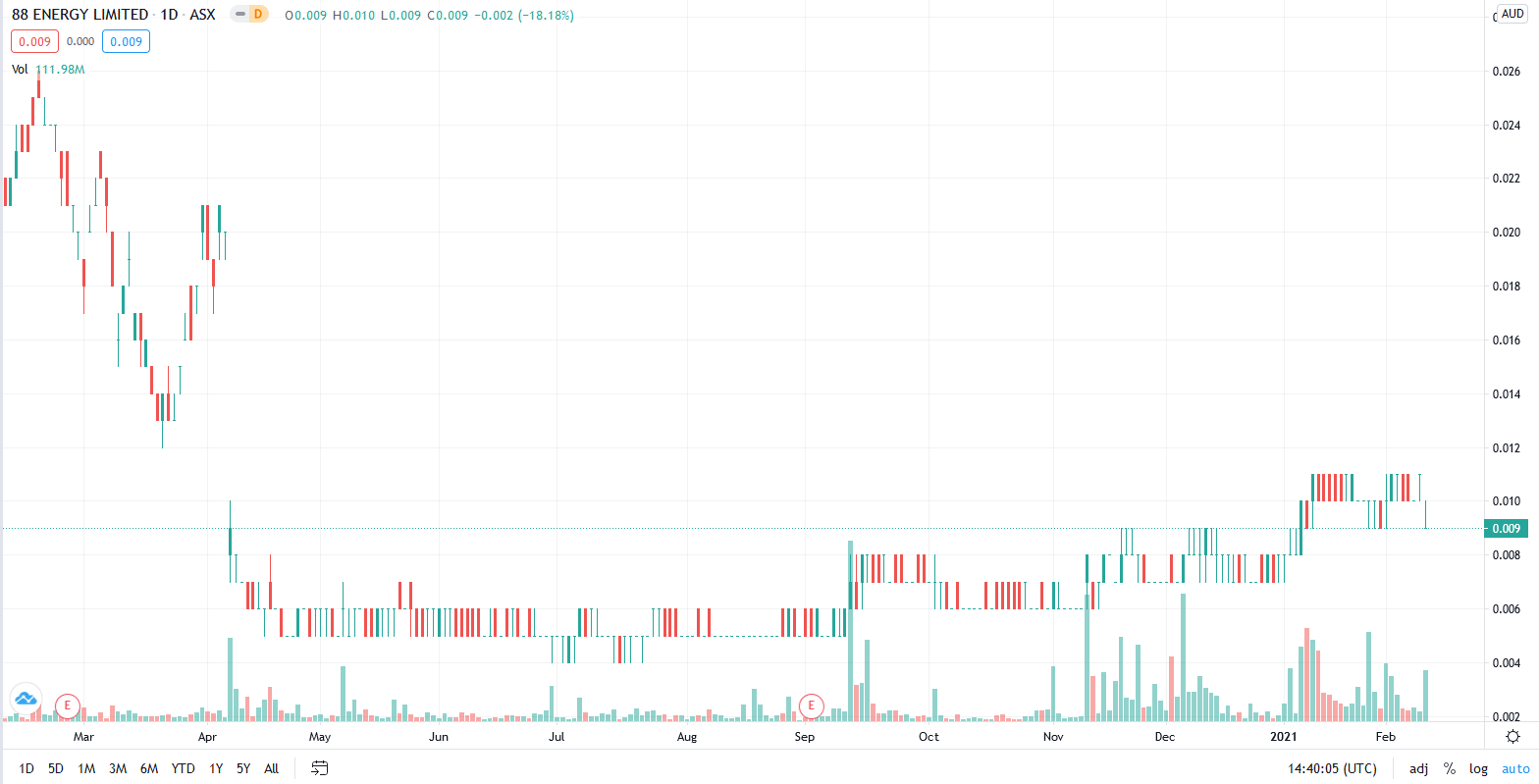 On the 12th of February, 88E announced that it has completed an oversubscribed equity raise to institutional investors. 88E has raised $12 million before costs via a Placement offer at a share price of $0.008. Prior to the equity raise, 88E had $14.8 million in cash reserves. This fundraise strengthens the balance sheet of the firm and gives them the capital required to fund the ongoing evaluation of the firm’s assets. The funds are being used for the below activities:

88E operations in Alaska back on track after drill suspension

In January 2021, the U.S. Department of the Interior ordered a “suspension of authority” on offices concerning the granting of permits. Doubt hovers over 88E on how the suspension would be implemented and how it would affect the company on the approval of its permit to drill. Fortunately, 88E was later reassured that the permit would be processed in time for Merlin-1 to be drilled by the end of February 2021.

88E revealed it has reached a deal to acquire the Umiat oil field, which is situated on Alaska’s North Slope. To secure the asset, 88E is issuing a 4% overriding royalty interest and accepting obligations for the abandonment of two historic wells on-site, at an approximate cost of US$ 1M. A well in Umiat-23H was tested by the prior operator back in 2014 with an output potential rate of 200 barrels per day with a maximum rate of 800 barrels measured. The asset had 123.7M barrels of gross proved and probable reserves, according to a 2015 report.

Even though we assume liquids fuels consumption to increase from 2020, consumption in 2021 is forecasted to remain inferior to 2019 levels of 20.5M barrels per day largely because consumption of transportation fuels including gasoline, distillate, and jet fuel is expected to remain lower than 2019 levels.

88E may be exposed to risks arising from the company use of financial instruments to support and develop its business operations. We have recognised the following risk that can significantly impact on the performance of the company:

For the six months ended June 30, 2020, 88 Energy revenues decreased by 89% to A$ 2K. Net loss decreased by 86% to A$ 4M. Revenues reflect a decrease in demand for the company’s products and services due to unfavourable market conditions. Lower net loss reflects Other expenses decrease of 96% to A$ 1.3M (expense), finance cost decreased by 4% to A$ 1.5M (expense), while foreign exchange gain/loss increases from A$ 15K to A$ 43K (income).

88E considered the Icewin project to not meet the prospective result, thus, 88E had decided to not renew its leases. These leases represent approximately 25% of the gross lease position. The termination will reduce the ongoing rental costs.

During Q4-2020, 88E reported a total of A$ 2M for exploration and evaluation expenditure primarily associated with expenditure on the Charlie-1 post well testing as well as Project Peregrine well planning and permitting.

Lease rental payments totalled A$ 2M in Q4-2020. Cash call proceeds received from Joint Venture partners in the quarter totalled A$ 7.6M, while payments concerning the debt facility interest accounted for A$ 0.6M and A$ 0.4M for debt repayment. By the end of Q4-2020, 88E had cash reserves of A$ 14.8M, which include cash balances held in Joint Venture bank accounts relating to Joint Venture Partner contributions for a total of A$ 5.2M. 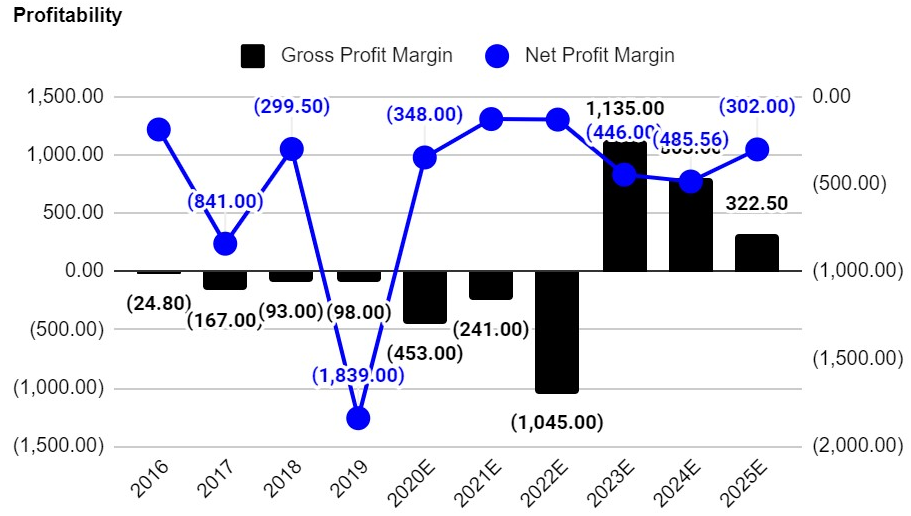 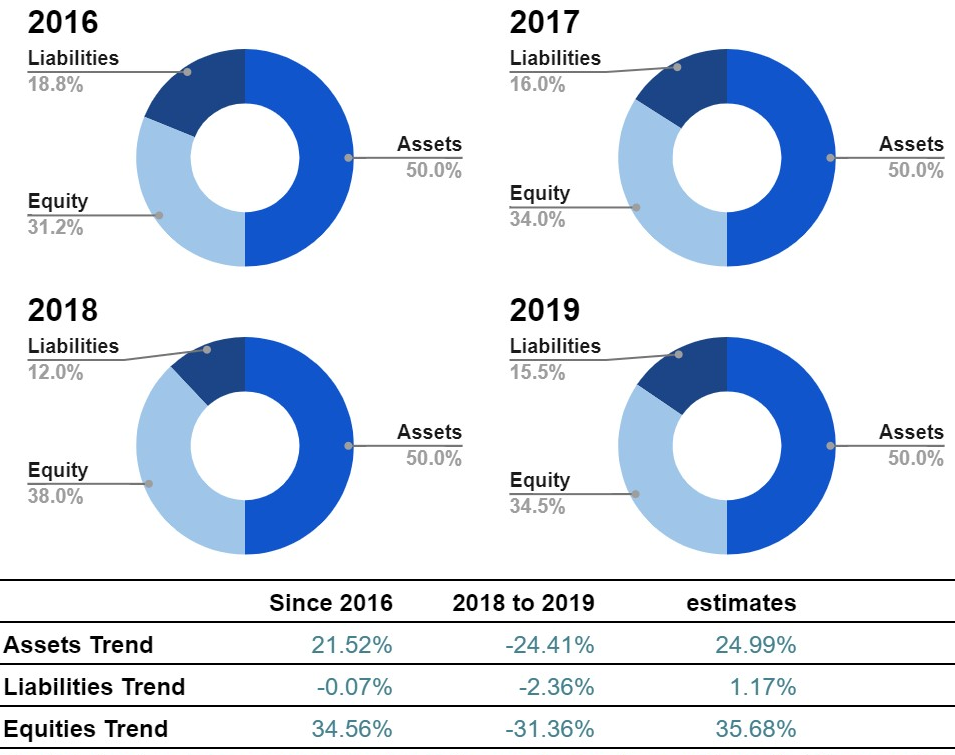 After reaching an all-time high in March 2016 at a price of A$ 8.1 cents per share, E88 price action continuously exhibits a bearish pattern with the formation of a multi-year descending triangle. The base of the triangle is formed around the A$ 1.5 cent per share which is our primary target. We believe that the A$ 1.5 cent per share level to be a critical level that requires a breakout to trigger a rally toward A$ 2.2 cents and 2.6 cents which correspond to early 2020 highs. The RSI 14 on the weekly timeframe is holding well the upward slope since July last year, which may support 88E to challenge the A$ 1.5 cent key level which is at the nearest resistance level and our primary target price. Since July 2020 low at A$ 0.4 cent, 88E recovered by an impressive 176% back above A$ 1 cent.

Since last year, 88E has been evolving between A$ 0.4 cent (all-time low) and A$ 2.6 cents. The key level to monitor is the all-time low which we believe may act as the ultimate support level and the A$ 1.5 cent which is the multi-year key level. A breakout of the A$ 1.5 cent level may open the door for a retest of the 2020 high at 2.6 cents.

Volume surged since the last 200-day with the 20-day volume average up by +52%. The price action remains bullish in the near-term, evolving in a range between A$ 0.4 cent and 2.6 cents per share. 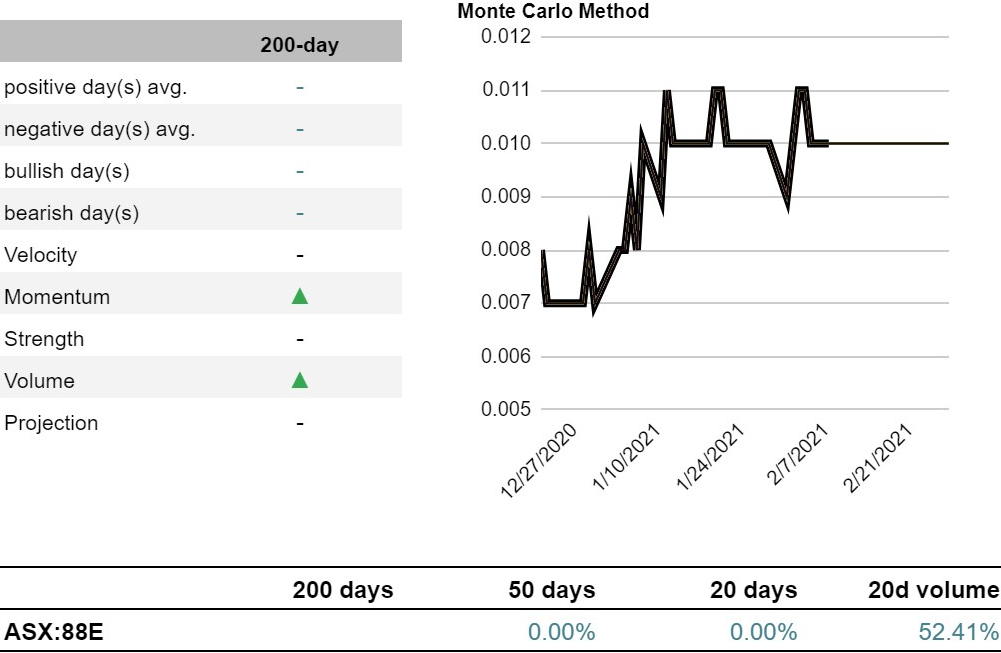 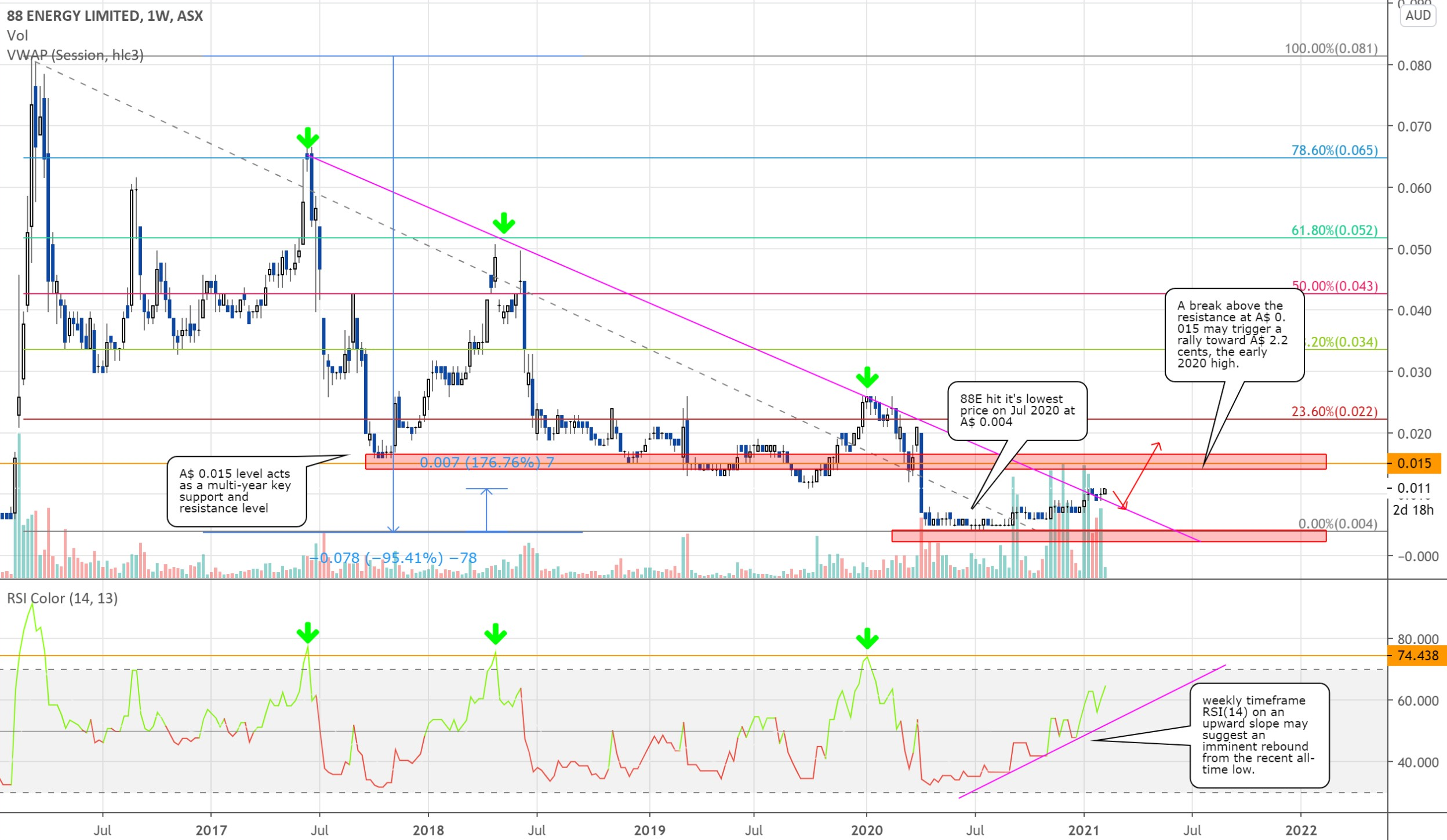 We are issuing a speculative buy recommendation on 88E with a target price at A$ 0.015 per share. 88E recently revealed an acquisition deal for the Umiat oil field which can produce up to 800 barrels per day. We reckon that the Umiat acquisition has the potential to add significant value for shareholders. The recent equity raise sets up 88E with enough funds to take it through to the end of the year.