Sayona Mining Limited (ASX: SYA) is an ASX-listed lithium producer with assets in Quebec, Canada, and Western Australia. The company is a promising and emerging lithium producer.

Among Sayona’s holdings in Québec are North American Lithium, which includes the Authier Lithium Project, and the Tansim Lithium Project, which is being developed via a strategic collaboration with American lithium producer Piedmont Lithium Inc. (Nasdaq: PLL; ASX: PLL). Another project in northern Quebec that the company has a 60% part in is the Moblan Lithium Project, with the remaining 40% owned by SOQUEM.

There are a lot of tenements in Western Australia that the company owns that are good places to look for gold and lithium. At Sayona’s Pilbara gold exploration site, the company is looking for Hemi-style gold opportunities, while at Morella’s lithium projects, the Sayona has an earn-in arrangement with Morella.

SYA stock is currently trading at $0.20 and has gained more than 412% in the last twelve months. The company has started working on different lithium projects across the globe, which has resulted in a sudden stock increase. 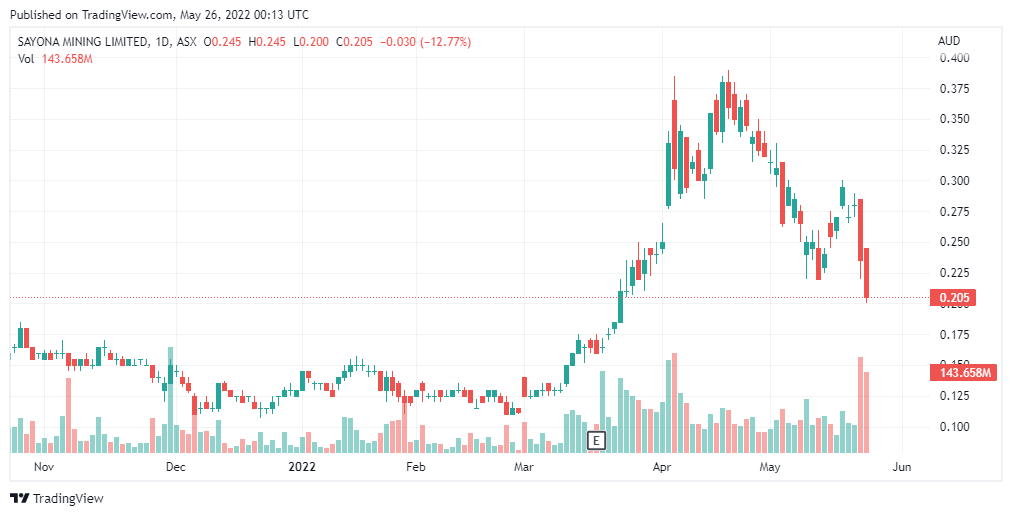 SYA is on Trading Halt

In a press release today, the company announced that its management has decided that the securities of Sayona Mining Limited (SYA) will be placed on a trading halt pending its release. Unless ASX decides otherwise, the securities will remain on a trading halt until the earlier of the commencement of regular trading on Friday, 27 May 2022, or when the announcement is released to the market.

Why has the SYA stock gained in the past Twelve Months?

Western Australian Projects, Pilbara Exploration, Sayona Lithium Tenure, and the company has a stake in Pilbara Gold Exploration and East Kimberley Graphite Project to identify coarse flake graphite mineralization of its other projects in Australia.

The company is much diversified and is expected to generate considerable revenues when the demand for lithium increases due to the increase in the production of Electric Vehicles.

SYA is a promising ASX-listed lithium stock and is showing a positive trend in the market. The company has a diversified portfolio and has increased its revenue by more than 32,000% year-over-year from $336K to $108.5 million in the first half of 2022. The Group’s prospects are bright. The Group’s strategic emphasis is on restarting spodumene concentrate production at NAL in the first quarter of 2023 and evaluating downstream processing prospects at NAL. The company is also trying to expand its stake in the Moblan project to create a Northern Quebec lithium site.