Being the world’s second-largest metals and minerals company, Rio Tinto Limited (ASX: RIO), the Anglo-Australian company is becoming enormous after the continuous wave of acquisitions. The company specifically deals with minerals exploration and is interested in refining the bauxite and iron ore business. The company was founded in 1873, and the fun fact is that it is a dual-listed company listed on the Australian Securities Exchange and London Stock Exchange.

Rio Tinto Limited (ASX: RIO) is currently in the “Acquisition Mode” and is acquiring businesses in its industry. On Monday, the company announced the acquisition of the Rincon Lithium Project for $825 million. The acquisition was announced in December 2021, and on 28 March 2022, the deal was announced to be official.

RIO has been steadily gaining value over the last six months

RIO had been consistent in the last six months and gained 21%. There were major contributors to its share price rise, such as its acquisitions, increase in oil and gas prices, and currently the supply chain disruption due to the Russian Invasion of Ukraine. Last but not least, its robust fiscal 2021 results played a key role in its importance; as a result, its stock surged in the market. 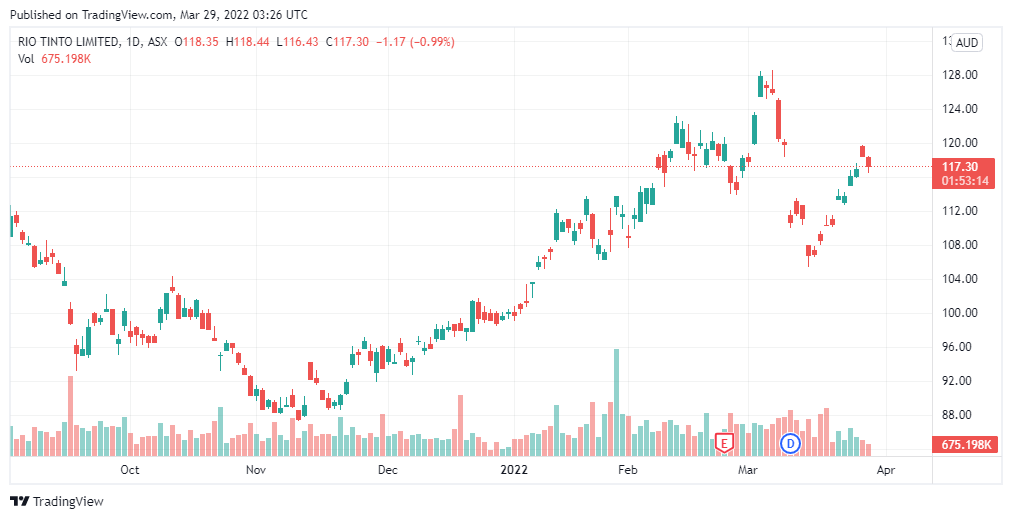 Rio Tinto Limited (ASX: RIO) announced that it had finalised the acquisition of the Rincon lithium project in Argentina for $825 million (FIRB). The company moved forward with the decision after the Foreign Investment Review Board (FIRB) granted permission for the deal.

In December 2021, Sentient Equity Partners announced a formal deal to acquire the project from Rincon Mining, a firm controlled by funds managed by the private equity group.

One of Argentina’s largest lithium brine projects, Rincon, is situated in the Salta Province, becoming a hotbed for new Greenfield developments. With this resource in place, they can produce battery-quality lithium carbonate for many years to come. In terms of carbon impact, it might be the greenest option available.

RIO CEO’s Remarks on the Acquisition

CEO Jakob Stausholm of Rio Tinto stated that Rincon improved our battery materials business and positioned Rio Tinto to meet the double-digit increase in lithium demand during tight supply. We will collaborate with the Salta Province and the Argentinian government to ensure that this project meets the most stringent environmental and social guidelines.

RIO recently announced that they are interested in buying the remaining shares of Turquoise Hill, which they do not own yet. The company has offered C$34, which is a premium of 32% according to the last close on 13 March 2022. The management of Turquoise still has to decide whether to accept or reject the offer. Turquoise would be worth $2.7 billion if the deal is successful. After the deal is completed, Rio Tinto will have 66% of Turquoise Hill shares.

Rio Tinto Limited (ASX: RIO) is looking forward to grabbing a decent market share of the upcoming boom of the lithium market. Lithium is amongst the major components of batteries used in electric vehicles. So with the rise of electric vehicles, the demand for lithium has also increased significantly. The company is interested in diversifying its business and has been taking a keen interest in companies dealing with copper, fertilisers, and lithium.