Perenti Global (ASX: PRN) is an ASX-listed diversified global mining services group. The Group is one of the world’s major providers of surface and underground mining at a vast scale. The company was founded in 1986 and is headquartered in Pert, Australia.

Perenti has operations and offices in 13 countries on four continents. It has about 9,000 mining professionals working for it, and as of now, the company is working on some of the most significant mining projects in the world.

In the first half of 2022, Perenti announced that idoba and Sumitomo Corporation had signed a Memorandum of Understanding (MOU) for the co-creation and joint development of mining technology-driven services toward achieving sustainable mining. In addition, Orelogy and Atomorphis, two different but related companies, were acquired by Perenti as part of the strategic acquisition.

PRN shares have gained on Friday’s close. PRN stock values at $0.66 with a gain of more than 5.6% on the intraday trading session on Friday. The market cap of the company is around 461.89 Million AUD. 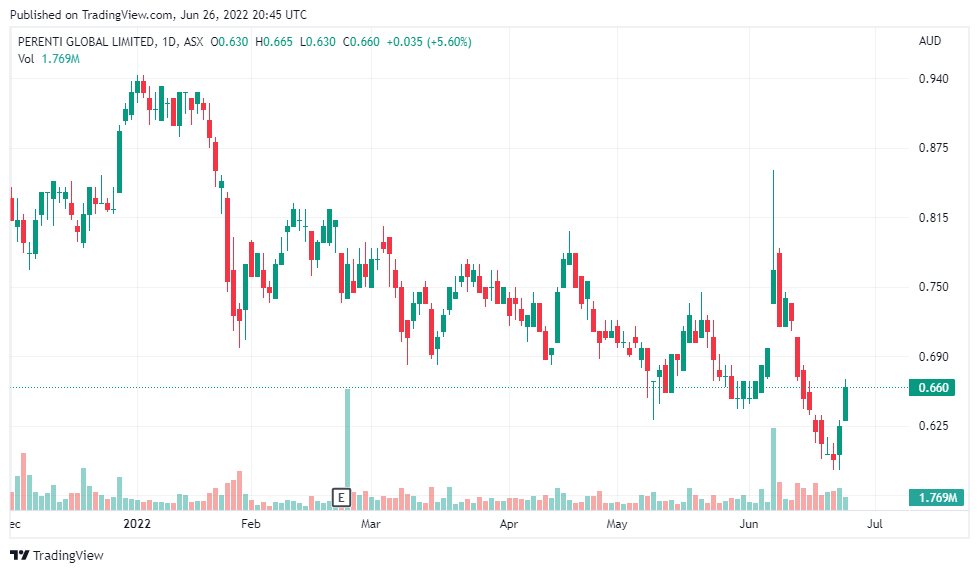 Perenti this week announced to secure a new Syndicated Debt Facility of $420 million. It will be utilised to refinance its existing facilities due to mature in 2023.

Perenti, on 7 June 2022, made two significant announcements. First, it announced its Barminco underground mining business has been awarded the contract for all underground development and production works for Evolution Mining’s (ASX: EVN) Cowal Underground project in New South Wales.

It is an essential step towards the progress of the company. It will expand its operations as a tier 1 jurisdiction within Australia, reflecting lower operational risks compared to the Parenti’s African Projects.

Perenti is a household name in the mining services sector, and seeing the outlook of its relative industry, it seems like the demand for its services could see a hike. The world is moving towards the consumption of green energy, and many young companies are working in this sector that is exploring commodities that are used in modern technology, such as lithium, nickel, copper, and rare earth elements.

It is expected by the Department of Industry, Science, Energy, and Resources that the mining exports of Australia could reach up to $379 Billion in 2022. The $300 Billion mark was achieved for the first time in 2021.

This growth suggests that Perenti’s mining services could not only surge in Australia but also across the globe.

Perenti Global’s shares are gaining due to its robust financial outcomes and future outlook. The company expects to achieve revenue between $2.2 billion and $2.4 billion in FY22. The company will also refresh its 2025 strategy in the FY22 results, reflecting new and improved targets for the upcoming years. PRN’s share price is subject to inflation and interest rate risk, which may reduce profit margins.