Paladin Energy (ASX: PDN) is on a trading halt as it raises $200 Million to Restart Langer Heinrich Mine Project

The stock is currently in a trading halt after the company announced $200 million in funds raised to restart the halted Langer Heinrich project in Namibia. The PDN stock will start trading on Monday, 4 April 2022.

PDN surged 19% to trade at $0.81. At the previous close, the stock was valued at $0.86, with a trading volume of approximately 28.65 million shares. The current market cap of the company is around AUD 2.12 billion.

The company recently announced its half-year results, and the numbers were reasonable compared to the last reported quarter. PDN has significantly improved its net loss. 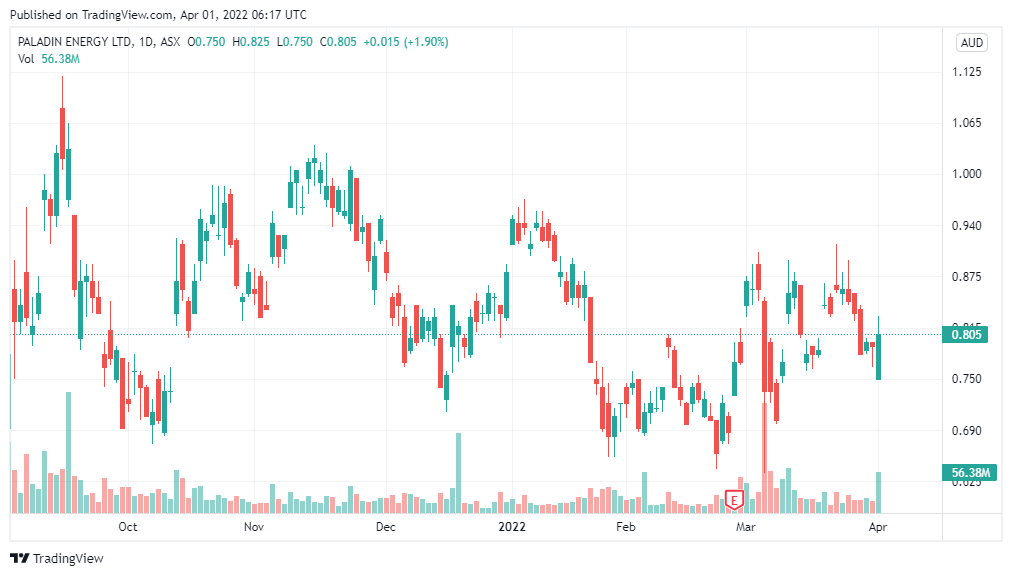 Upon the request of Paladin Energy Ltd (ASX: PDN), the securities of PDN will be halted indefinitely, awaiting the release of an announcement by PDN. Securities will remain under a trading halt until either Monday, 4 April 2022, or until ASX makes a statement.

ASX-listed Paladin Energy has announced a A$215 million stock offering to support the reactivation of its Namibian Langer Heinrich Mine.

Approximately A$200 million will be raised through a single financing amount of fully underwritten shares. PDN will raise an additional A$15 million through a non-underwritten Share Purchase Plan (SPP) offered to eligible Paladin shareholders with registered addresses in Australia or New Zealand.

This means a pre-Equity Raise cash balance of A$259 million and no corporate debt for Paladin. The restart of the Langer Heinrich Mine is now less risky, and the company is well-positioned for future uranium marketing activities due to its solid financial position. The official relaunch of the project is anticipated to take place in July 2022.

Paladin’s mining operations in Australia and Canada remain a priority. This period saw PDN spend $144K of its operating cash flow on new assets such as machinery and equipment and $662K on securing the bare necessities at each of its locations.

The Langer Heinrich mine in Namibia, Africa, was still being worked on by PDN. A new version of Paladin’s Langer Heinrich Mine Restart Plan was released in the first half of 2022 results. Paladin confirmed ore reserves of 84.8Mt with an average U3O8 grade of 448ppm and an estimated cost of US$81 million for restarting the mine.

This cost the corporation $1.57 million to maintain the site. A further $932,000 was spent on the restart strategy. However, the mine has yet to receive an official reopening date.

Paladin Energy Limited (ASX: PDN) declined significantly a couple of weeks ago in the market during the ongoing Russian invasion of Ukraine. Previously, Russian forces had shelled the Zaporizhzhia nuclear plant in Ukraine. Following the shelling of the nuclear plant, it caught a massive fire, and the Ukrainian Prime Minister warned of possible destruction because of it.

Due to the attack on the nuclear plant, this severe incident has shacked the confidence of investors in the entire global nuclear power industry. Due to this, uranium stocks declined significantly in the market. But PDN has currently regained value after the crash.

Although, the ongoing conflict between Russia and Ukraine has affected all industries across the globe. But when Russia attacked a nuclear power plant in Ukraine, the stocks of uranium companies plunged.

But now, the company seems to be optimistic about the Langer Heinrich Mine in Namibia and raised A$200 million funds for the project. The company said they are in the best financial position to restart the project.