Global gold producer OceanaGold is devoted to the highest levels of technical, environmental, and social performance in the mining and processing of gold. Founded in 1989, the company’s headquarters are in Melbourne, Australia.

They have been making significant contributions to excellence in their business for the last 33 years by achieving sustainable environmental and social results for their communities while generating substantial returns for investors. The company has had much experience with exploration, development, and operation worldwide. This has led to an industry-leading pipeline of organic growth opportunities and a portfolio of established operating assets, like the Didipio Mine in the Philippines, the Macraes and Waihi operations in New Zealand, and the Haile Gold Mine in the United States of America.

OGC stock is rising after releasing the first quarter of 2022 results and providing production updates. The company’s performance has increased significantly, and investors are excited about the excellent returns.

OGC stock gained as soon as it released its production updates and first-quarter results. OGC stock is currently trading at $3.42 and gained over 7.5% in the intraday trading session as soon as the news of production updates hit the market. If we look at the last 12-months, the stock returned more than 59% to its investors in the previous year. The company has a current market cap of $2.45 billion. 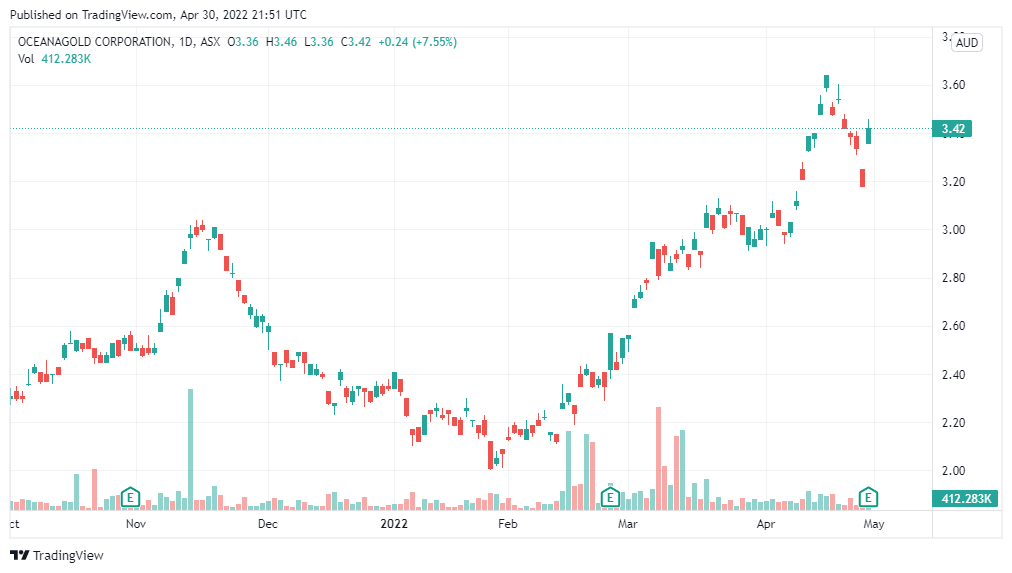 The company’s management is optimistic about the company’s performance and expects to achieve the projected goals efficiently.

OceanaGold stock is rising on the ASX after releasing its production details. Investors are happy to see the company’s production capability and expect it to improve its numbers in the future. The company optimised its production at full capacity at all mining sites, due to which its production inclined, resulting in the massive growth of revenue and profitability.