National Australia Bank Ltd. (ASX: NAB) is one of the four largest banks in Australia in terms of market capitalisation, earnings, and market share. NAB is ranked among the most prominent bank globally measured by market capitalisation and total assets. It was founded in 1981 and is headquartered in Melbourne, Australia. Bank of New Zealand and JBWere Ltd are its subsidiaries, among others.

Another phase of significant momentum occurred in 1H22. The company’s success has been attributed to its ability to stick to its approach. Over the six months to March 2022, customer NPS and market share gains across housing, business, and unsecured loans and deposits have remained constant.

This development has led to 9% cash EPS growth and 100 basis points cash ROE growth to 11.3% in half-on-half. Solid performance over a long period will be the actual difference, which is why NAB is putting a lot of effort into long-term management.

NAB stock is currently trading at $31.07 but has gained more than 17% in the previous year. NAB stock has shown significant momentum compared to its other top-notch competitors. 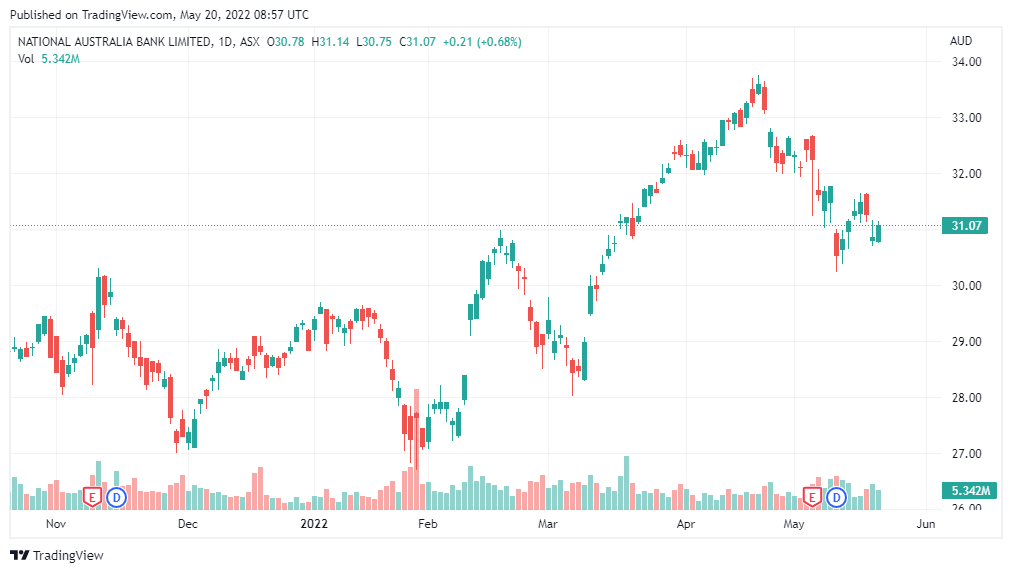 First-half results reflected the spike in the lending business

The company recently updated its results for the first half of 2022. The results reflected a robust increase in the NPAT. The 1H22 NPAT was around $3.56 billion representing a 10% increase y-o-y. The company added that a rise in fees and commissions and an increase in risk management earnings in the firm’s Markets and Treasury divisions have all contributed to a higher NPAT.

The acquisition of Citigroup’s Australian consumer banking business will further support its ambition to build a leading personal bank with a more direct, more digital experience and the doubling of share by back offer are something investors can look forward to. The acquisition of Citigroup will increase the NAB’s mortgage book by around $8 billion. This way, the size of NAB’s credit card operations will double.

What should investors expect for future growth?

The market cap of NAB is around $99.8 Billion and ranks among the top 4 big banks in Australia. If we look at the chart, its share price has almost doubled in the previous two years. Shareholders might think that prices are too high, but actually, they are not. Its guidance for fiscal 2022 estimates EPS growth of 5.8%.

According to our estimations, the rise in the interest rate will play a vital role in its growth, eventually easing the pressure on NIM. All top 4 banks face pressure on NIM, but if we compare it with ANZ, the company is far ahead. The NIM of ANZ is 1.57%, while NAB stands at 1.64%.

Is NAB the best stock among Big 4 Bank stocks?

NAB stock is currently trading at a reasonable price, not ignoring the fact that amongst the 4 big banks, it is one of the two banks that have a positive momentum at the momentum followed by no regulatory inspection. The other bank is CBA (ASX: CBA), enjoying the same status. If we look at the NAB’s Price-to-Book (P/B) value of 1.7x, it slightly lacks behind CBA, whose P/B value is 2.4x. But if compared with ANZ and Westpac, they both stand at a P/B value of 1.2x.

NAB is trading at 16.5x based on Price-to-Earning (P/E) ratio. If compared with CBA’s P/E ratio of 20.6x, it could be concluded that it trades cheaper than CBA. On the contrary, Westpac and ANZ are 16.0x and 13.4x, respectively. It reflects that NAB is more expensive than Westpac and ANZ.

Analysis suggests that as of now, NAB is currently the best among the Big 4 Bank stocks.