Myer Holdings (ASX: MYR) to pay the first dividend since FY17! Here is what you need to know

Myer sells almost everything that any household would need. It ranges from clothing and footwear for children and adults, beauty products, stationery items, electrical and home appliances, food and confectionaries, and many other goods.

David Jones is its major competitor, and Myer Holdings was once the largest departmental store in Australia. The company was founded in 1900 and is headquartered in Melbourne, Victoria, Australia.

The company recently announced its results for the first half of 2022. The important aspect of this report was the announcement of its dividend. The company has decided to pay dividends to its shareholders after four years.

MYR shares currently trade at $0.51, with a trading volume of approximately 2.17 million shares. The market cap of the company is around 414.75 million.

The company has recently announced its results for the first half of 2022. The company’s growth rate was comparatively lower than the growth rate in the same period of last year. 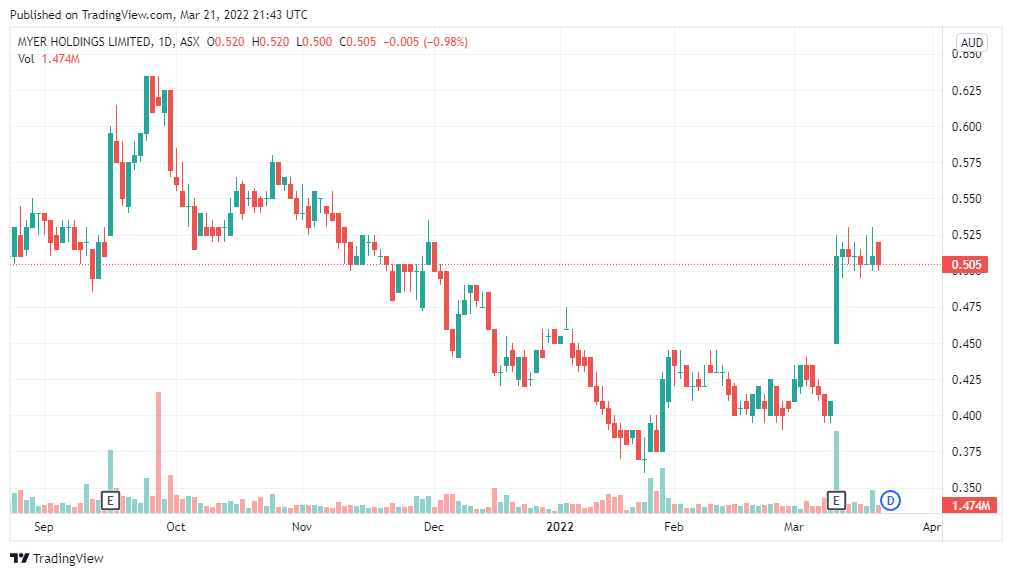 Myer’s hurdles were Omicron’s emergence in late December and the mitigation of substantial supply chain disruption and workforce availability in early 2022. But our combination of online platform and shop network was overcome throughout the time.

As we enter the second half of the year with sales up 15.2% in the first five weeks of trading, Myer will pay a dividend for the first time in four years, indicating our confidence in the momentum we’re building as we go into the second half.

Following the close of business on 29 January 2022, the board of directors has proposed paying an interim dividend of 1.5 cents per fully paid ordinary share, fully franked at the corporation tax rate of 30%, to be paid on 12 May 2022. Because of the interim dividend, the financial impact of the dividend has not been recognised in the half-year financial statements for the period ending on 29 January 2022. However, it will be recognised in the following financial statements.

Myer has decided to pay its valued shareholders a dividend this year. The last time Myer paid a dividend was in FY17. Financial pressures meant that Myer could not afford to pay a dividend in the past 4 years. MYR shares also lost ground during this time, losing around 52% in the last five years. This year’s dividend payment could be a strategy to help its stock gain its value. Since its dividend payment was announced, MYR stares have gained around 23%.