Lake Resources NL (ASX: LKE), along with other Lithium Stocks On ASX, crashed on Wednesday! Here Is What You Need to Know.

Lake Resources NL (ASX: LKE) is a lithium company listed on ASX. Its aim is to be a household name as an efficient, environmentally friendly, and cost-effective provider of pure lithium. The projects of Lake Resources have enormous potential to scale in the future. The company has to offer better-quality product that is in demand by the Top Tier electric car companies across the globe.

Kachi Lithium Brine Project is the company’s flagship project and is expected to begin production in 2024. Its 99.9% pure lithium carbonate with low to no impurities is its signature product and gives it a competitive edge to attract potential corporate buyers.

The lithium stocks didn’t just crash in the ASX but all stock markets worldwide. The reason is that Goldman Sachs revised its price target for lithium, and it looks like that sentiment dragged on the lithium sector.

LKE stock closed at $1.35 on Wednesday, 1 June 2022, shedding around 12.90% in its value. If we look at the percentage, LKE stock was relatively strong to take the blow instead of its completive lithium stocks in the market. 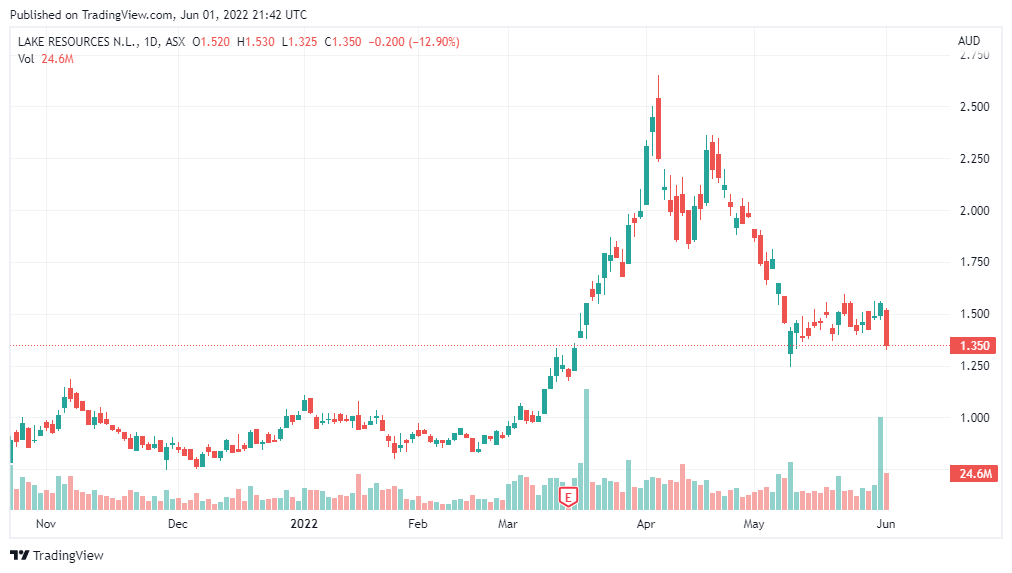 LKE: Reason why lithium stocks crashed on the ASX

The main reason for the LKE stock and other lithium stocks crashing on the ASX was mainly the effect of the changes in the price target by Goldman Sachs. Goldman previously had given a $60,000 per tonne price target for lithium in 2022. But they revised its price targets, and according to the new updates, the lithium could value around $54,000 per tonne in 2022, while in 2023, it will drastically reduce to a mere price tag of $16,000 per tonne 2023. According to analysts’ statements, they consider the battery metals bull market to be finished for the time being.

The main concern of the Lake Resources is that they are anticipating beginning production at Argentina’s Kachi Lithium Brine Project by 2024.

LKE: Is it Possible to Replace Lithium Based Battery?

A viable lithium-based battery alternative has been developed by researchers at the University of Houston, which could be why financial analysts had to reduce the price targets for lithium.

On Wednesday morning, Science Daily in the US stated that researchers have produced glassy sodium electrodes that may facilitate “long-duration, grid-scale energy storage.” Nature Communications reported the findings of this investigation. New structural and compositional design methodologies in this study represent a paradigm shift in creating safe, low-cost, energy-dense, and long-lifetime solid-state sodium batteries,” Ye Zhang, a researcher at the University of Houston, stated.

Given the demand for green energy and EVs, most companies related to the electric vehicles supply chain saw a massive surge in their stock prices. The decline in the price target of lithium by a reputed financial institution has created waves on the stock markets around the globe. As soon as the news hit the market, lithium stocks witnessed a severe blow to their upward trend in stock prices. The upcoming days will be crucial for investors whether they trust the role of lithium companies concerning the goal of achieving green energy consumption or not?