Boss Energy is an Australian uranium exploration, mining, and development company keen on becoming a significant player in the Australian and global uranium market.

Boss Energy is among few mature companies to enter the novel uranium bull market. When the world is moving toward green energy and discarding the methods of conventional electricity production, the use of Uranium can be a key asset in this process. Uranium has the great potential to unlock the way for an unlimited energy source.

BOE stock is currently rising after the company recently provided quarterly updates. If we look at the one-year performance, BOE stock is trading at $2.47 after hitting its all-time high of $3.08. It previously closed at $2.60 and has given a return of more than 1200% to its investors in the previous 12 months. 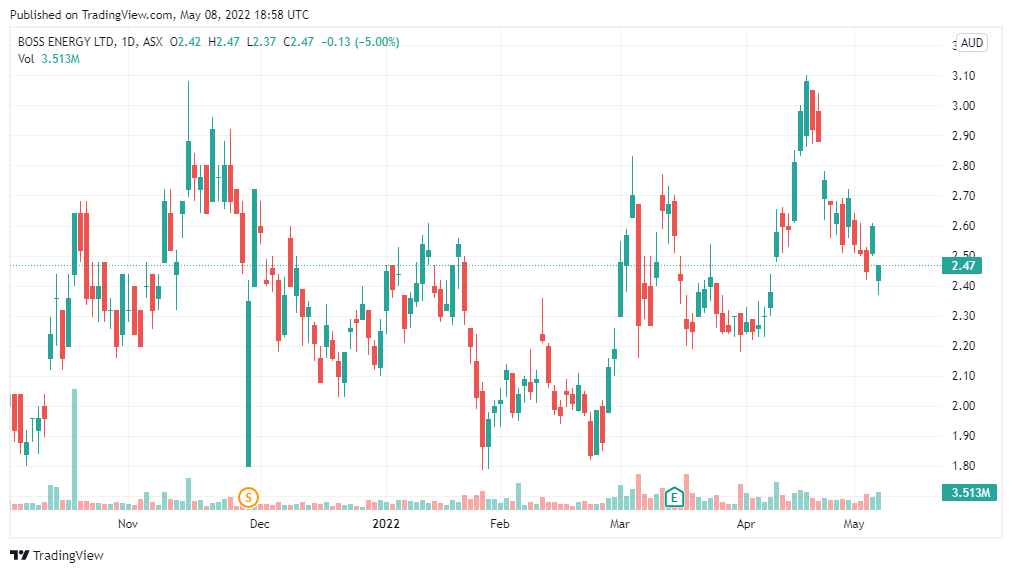 Boss Energy Ltd (ASX: BOE) stock has gained significantly in the trailing twelve months. The company has recently announced a solid financial statement with a heavy investment in Uranium.

Reasons for the BOE stock surging

On 16 March 2022, Boss undertook a $125 million equity offering to finance the development of its Honeymoon Uranium Project in South Australia to the point of the first production. With the help of the money, they will develop the project and increase its productivity. Honeymoon Uranium Project is its top-notch project, and this investment will bring a massive change in its development.

Boss announced on 10 February 2022 that it has inked a deal with First Quantum Minerals Ltd (TSE: FM) (FQM) about the rights to five tenements inside the Honeymoon Uranium Project in South Australia for the mining of basic and precious metals. The deal will help both the companies to utilise their capabilities for the economic benefit of both companies.

Uranium Prices and demand is pushing up the BOE share price

The government of the United Kingdom is keen on developing eight nuclear reactors by the end of 2030. They intend to increase their nuclear energy output to cater to the 25% energy demand of the UK by 2050. It will surely increase the Uranium market size in the UK.

The US had also intended to impose a ban on the Russian nuclear fuel import. The decision was taken after the Russian invasion of Ukraine. The ban has increased nuclear fuel demand from other companies in the US and Europe. Boss energy can benefit from the opportunity as they have a strong presence in the US.

Investment in Uranium ahead of the Crisis

The uranium spot price was US$42.13 per pound on 31 December 2021. The six-month return on uranium investment was $18,705,017, based on a USD/AUD exchange rate of 0.7256. The ConverDyn Facility in Metropolis, Illinois, houses all of the company’s uranium reserves.

The Russian invasion of Ukraine and the global demand for Uranium have immensely resulted in the surge in the global uranium market size. The company had been proactive in signing the uranium deal before this uncertain situation and has uranium reserves at a very low rate than the current ones. This will positively increase the revenues in FY22.

EML Payments (ASX: EML) is surging 11% at lunchtime. Find out why!