Hub24 Ltd (ASX: HUB) shares are trading in the RED despite reporting a record year

Hub24 Ltd (ASX: HUB) is an Australian fintech company that uses technology to connect advisors and their clients through wealth management solutions. The HUB24 platform provides a wide choice of investment alternatives, including market-leading managed portfolio solutions and enhanced transaction and reporting capabilities for advisors and their customers.

The HUB24 includes the award-winning HUB24 platform, HUBconnect, the Xplore Platform, and Class Limited. The company was founded in 2007 and is incorporated in New South Wales, Australia.

HUB: Key Updates of the Report

HUB shares are trading at $22.54, losing 5% in the intraday trading session on Tuesday. The current market cap of the company is around $1.8 Billion. 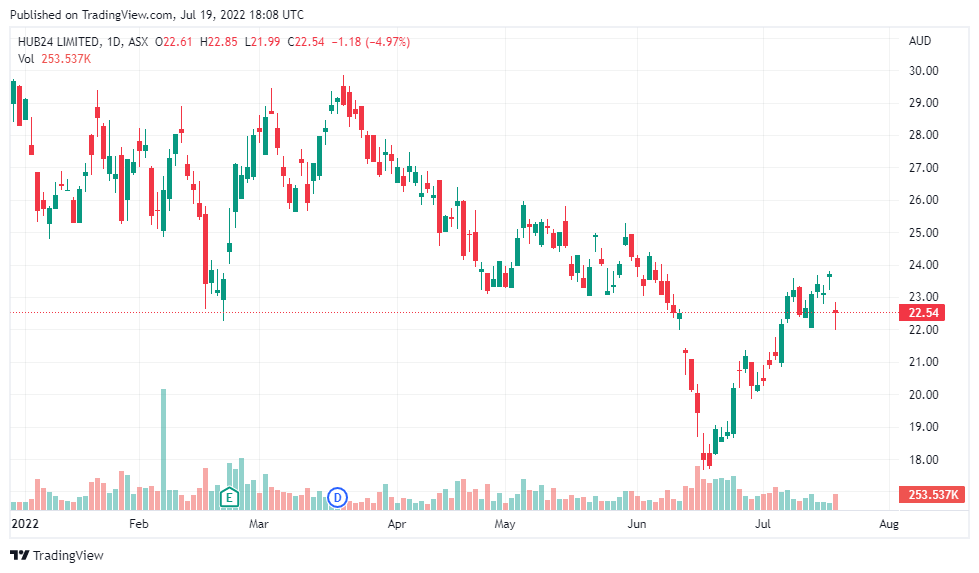 HUB: What is causing the decline?

HUB shares are falling despite the record year inflows announced by the company. The company released its fourth quarter update, and investors are not happy.

The company announced record inflows, but the sudden slowdown in the final quarter of FY22 may have terrified investors.

The final quarter revealed net inflows of $2.5 billion, declining 4% YoY. On the contrary, the fiscal year shows an 11.8% increase YoY.

No other reason could have triggered the investors; the company’s overall performance was excellent.

HUB24 has retained the second spot in Strategic Insights statistics for yearly net inflows. As of March 2022, HUB24’s market share has risen from 3.9 percent to 5.1 percent.

HUB24’s market leadership and flexible approach to helping advisors develop efficiency result in a solid pipeline of new possibilities across all customer groups, including big licensee customers, brokers, boutique advising firms, and self-licensed advisers. This quarter, 33 new distribution agreements were inked, and 3,486 advisors used the platform (up 13.8 percent on PCP).

Since 2019, the June quarter has been the Class’s most successful one in terms of overall account growth. Momentum is expected to continue into FY23.

Regarding the percentage increase in yearly FUA, HUB24 came out on top as the leader.

The major platform advocacy competition was won by HUB24.

Class Limited (Class) has appointed a new chief executive officer, and work has begun implementing a new business model focused on the customer.

The company’s yearly FUA growth was excellent, but the last quarter’s decline has cost them the drop today. This decline is temporary, and the company could recover the loss as soon as they step into the new fiscal year. The yearly growth will give the right momentum to step into the FY23.