The current turbulence in the world economic map is severely affecting global markets. The rising inflation and disturbance on the geopolitical map are why gas prices are increasing. Due to this, the whole economic system is disturbed.

At first, the world witnessed a tremendous rise in inflation when the deadly Covid-19 pandemic hit. Due to the pandemic, the world was shut down, and industries were crumbling. Companies had to lay off employees, and with the remaining employees, they had to adapt to the new work model; work from home. Due to this, people who had a stable income stream during the pandemic couldn’t spend their money effectively on outdoor activities, e.g., shopping and dining out. As a result of which, industries were in a recession.

But after two years, when there seemed a ray of hope that the industries were reviving and moving toward recovery, another problem hit its face. Yes, the Russian invasion of Ukraine. This invasion created a great disturbance in the world energy supply chain. Due to this invasion, the world had to cut ties with Russia to oppose its oppression of Ukraine. As a result, Europe stopped buying natural gas from Russia, which comprises 30% of its total demand. The world had also stopped buying oil from Russia, which supplies 5% of the global oil demand. It is second after Saudi Arabia, which caters to 15% of the global oil demand.

There was a time when the pandemic restricted people to their homes; oil consumption was reduced to a more significant number. So the price per barrel of crude oil was reduced to around $21.25. The cost of keeping the oil was higher than the production. So the distributors were giving it away for peanuts. Now, the table has turned around. The global demand is the same, but the supply of oil and gas is only provided by the countries previously involved, except for Russia. It has created an enormous gap on the global oil and gas map.

The world’s biggest oil consortiums have concluded to boost their oil production. The members of the OPEC+ have announced recently that they have decided to add 648,000 barrels/day during their production in July and August.

How will it affect Australia’s Economy?

If we look at the historical data, gas prices have increased massively in the past twelve months. The inflation rate has also increased due to the turbulence in the economy. In 2021 inflation rate in Australia was around 2.82%, while in 2022, it is expected to reach around the value of 4%.

The value of the Australian Dollar is also not in a good position. Economists assume that due to the current devastating situation in Ukraine, the interest rates are going to get higher, and the solid global growth will push the Australian Dollar in 2022. Australia only produces its 10% of oil demand; the rest it imports. Due to the devaluation in the currency, the oil prices are significantly going to increase in Australia.

What does it mean for the Oil Stocks on ASX?

The rise in oil prices is assumed to benefit the energy companies, but the situation is quite contrary in reality. According to economists, gasoline is an inelastic purchase which means that its consumption is not affected by the changes in price.

But one thing that we should not ignore here is that the consumption of energy products is a necessity in the modern era, due to which energy-related commodities are heavily regulated. Due to the inflated cost, most consumers won’t be able to afford it.

Due to the world cutting its ties with Russia, countries are considering buying oil from different companies across the globe. Most companies are increasing their yields to grab a share of the gap created.

Santos Limited is an energy company listed on ASX. The company is an independent oil and gas company and ranks second in the Australian Energy sector. The market cap of the company is currently 28.21 Billion AUD. Its P/E ratio is 19.53, and its dividend yield is approximately 2.34%. STO opened at $8.06 and closed at $8.33 at the end of the previous trading session. The stock has gained 30.97% in the previous six months. This growth rate depicts its stability and could be a potential energy stock for investors in the future. 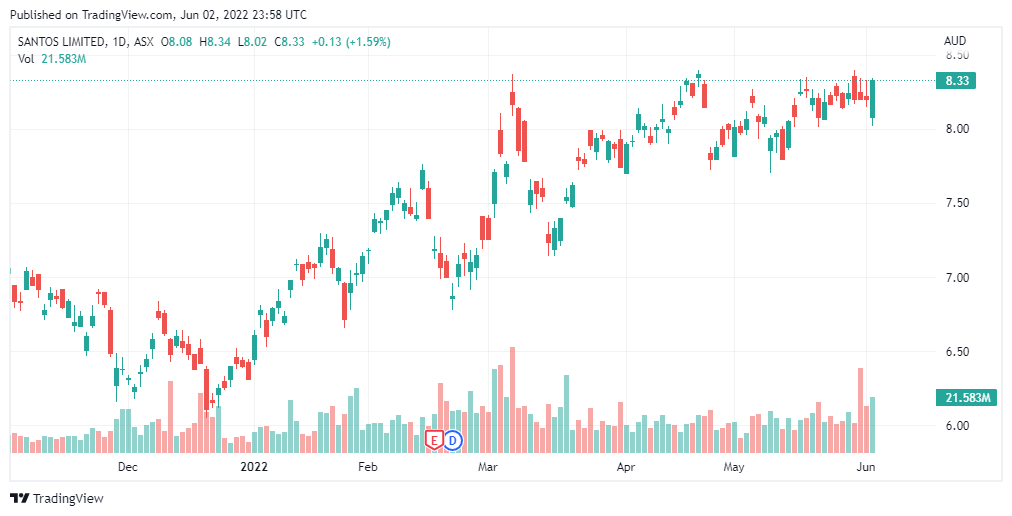 Similarly, Woodside Petroleum Limited (ASX: WPl) also saw an increase in the intraday trading session. WPL opened at $29.95 and closed at $31.75. Woodside Petroleum Limited is an Australian energy company involved in exploring and producing oil and gas. The company has a market cap of around 31.24 Billion AUD making it the largest and most independent energy company in Australia. Its P/E ratio is 11.16, and its dividend yield is approximately 5.90%. If we look at the chart, WPL stock has gained 48.78% in the previous six months. 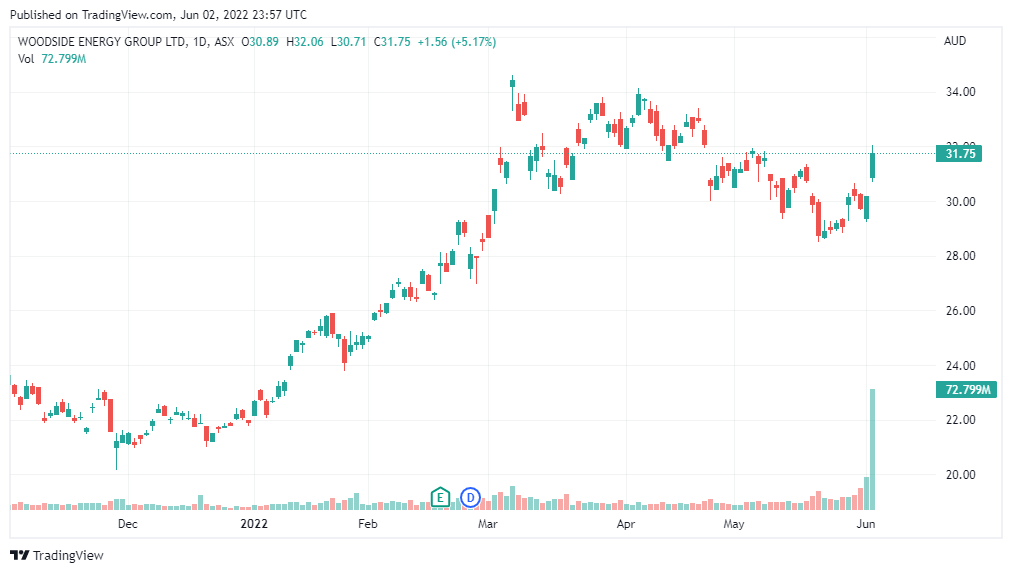