Fortescue Metals Group Limited (ASX: FMG) is Australia’s largest pure-play iron ore company. FMG benefitted massively in the iron ore boom of 2021 and became one of the highest-quality dividend stocks on the ASX. The company is known for its innovation, culture, and industry-leading practices in developing mining assets and top-of-the-notch infrastructure. It has approximately more than 87,000 square kilometre holdings in the Pilbara region of Western Australia. The company was founded in 2003 and is headquartered in Perth, Australia.

FMG stock is moving because the company, on 17 March 2022, announced its Dividend Reinvestment Plan Allocation Price. Another reason could be the increase in the price of iron ore. Due to this, its stock is on the surge in the market.

FMG’s stock price is $18.57 and has gained 2.20 since its previous close. Previously, FMG stock closed at $18.17 with a trading volume of approximately 10.34 million shares. The current market cap of the company is about 57.18 billion AUD.

FMG stock has been gaining significantly in the last six months. The company had announced some important business achievements, including acquiring Williams Advanced Engineering Limited (WAE). The company recently announced its first half of 2022 results. 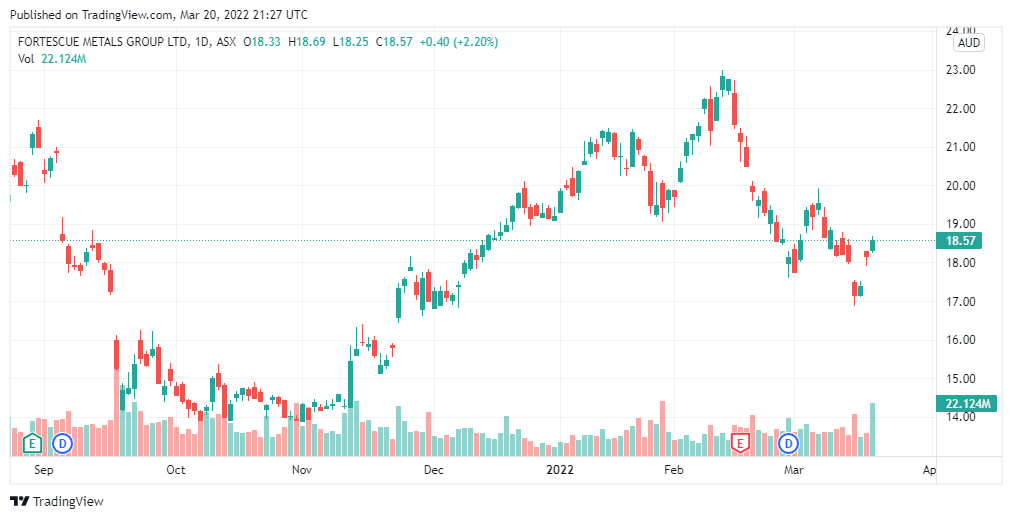 FMG: Rise in the price of Iron Ore

On 17 March 2022, iron ore prices increased. The current price of iron ore is $149.65 per tonne. Being a dedicated iron ore company, its stock has gained significant value in the market. Iron ore was trading at around $145 per tonne this week, but its prices have hiked significantly. If the iron ore price continues to surge, the FMG stock price may also surge.

Fortescue Metals Group Ltd (ASX: FMG) declared a fully franked interim dividend of A$0.86 per share on 16 February 2022, with a Record Date of 1 March 2022 and a payment date of 30 March 2022. Participants in the Dividend Reinvestment Plan will receive shares for $18.524 each for the 2022 interim dividend.

In line with the Plan’s provisions, the allocation price was computed as the daily volume-weighted average market price of all Fortescue shares traded on the Australian Securities Exchange for ten trading days beginning on the second trading day following the Record Date. On 30 March 2022, participants will get their share of its stock.

Fortescue Metals Group Ltd (Fortescue, ASX: FMG) had recently acquired Williams Advanced Engineering Limited (WAE) from private equity companies EMK Capital and Williams Grand Prix Engineering Limited for £164 million or US$223 million. The deal is projected to be completed by the end of March 2022, provided that all previous normal conditions are met, including permission of foreign investment by the United Kingdom.

Fortescue Future Industries will oversee and operate WAE, which will be vertically integrated within Fortescue’s diverse resource and green energy businesses. Fortescue will be able to speed up and assist the decarbonization of its mining operations while also creating a critical new business development potential with the purchase of WAE, which will bring vital technology and experience in high-performance battery systems and electrification. Working with Tier 1 clients in the luxury automotive and motorsports sectors, WAE has a proven track record of success, with sales of roughly US$84 million in CY21 (unaudited basis).

FMG stock is gaining value along with the increasing prices of Iron Ore. Economists predict its price might swing around during the year because of its volatility. The primary buyer of Australian iron ore is China. The risk here is that China wants to break its dependency on Australian iron ore by increasing its iron ore production by 30%. This will have a significant effect on the company’s revenue as China is amongst its largest buyers.