EML Payments (ASX: EML) is surging 11% at lunchtime. Find out why!

This morning, EML Payments responded to media speculation that suggested that EML was subject to a takeover offer.

EML confirmed that earlier in the year it was in discussions with Bain Capital regarding a potential change of control proposal. However, EML went on to add that those discussions have now ceased.

Also in the announcement, the company said that The Board of EML will always consider proposals presented to the company and is fully committed to acting in the best interests of and maximising value for, EML shareholders. EML appointed Goldman Sachs as its financial adviser and Herbert Smith Freehills as its legal adviser.

EML Payments has been subject to the same kind of treatment as the rest of the Technology sector. The stock price has plunged since mid-2021. EML shares are down 48% in the past year and over 8% in 2022 alone. 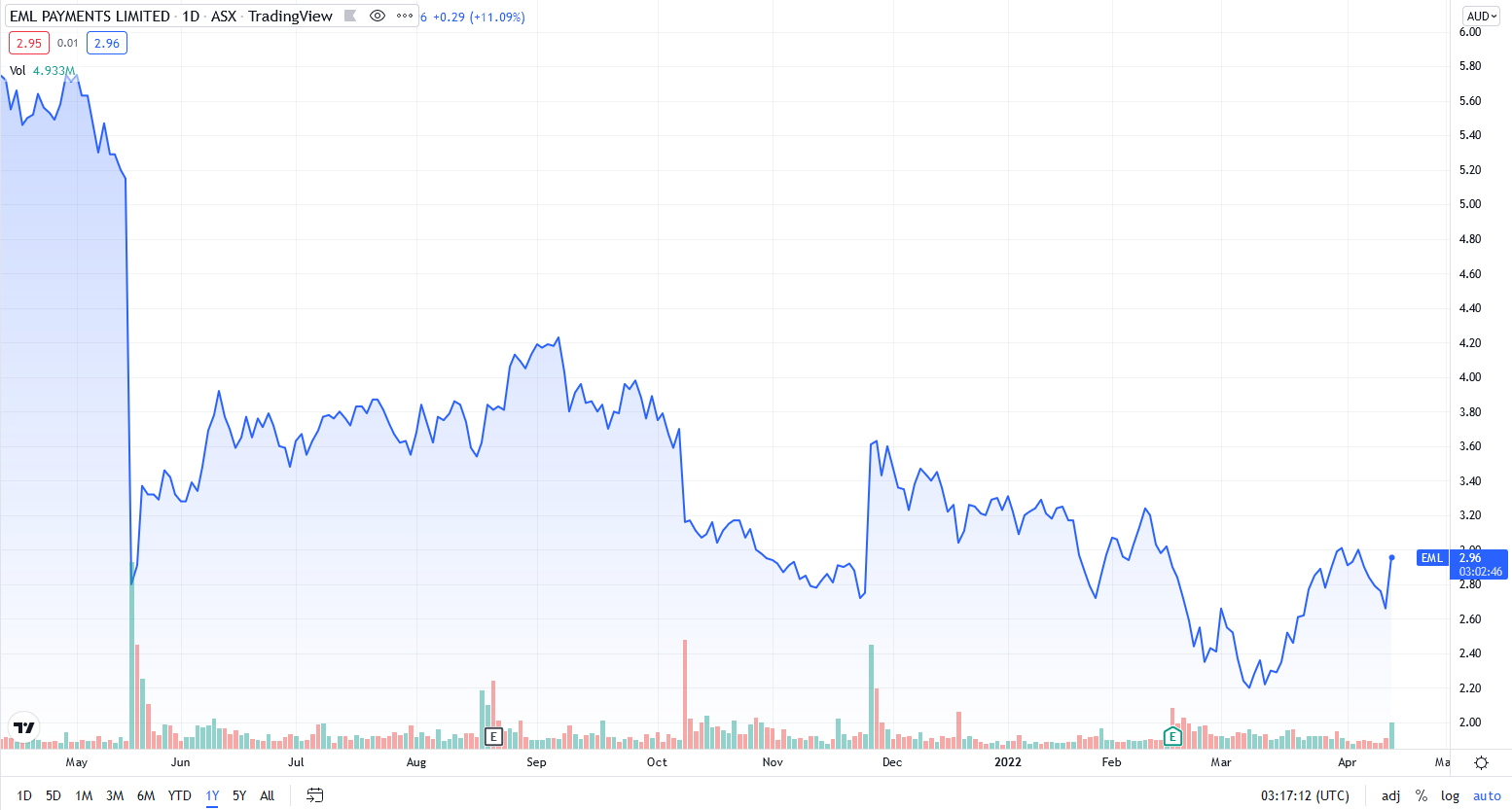 However, it has not been all doom and gloom for EML shareholders. In the past month, EML has returned over 28%.

EML Interim Results were a Hit

In February, EML announced its interim results for FY22 and there was a record GDV of $31.6 billion and revenues of $114.4 million for the first half of FY22. GDV represents the debit volume processed by the Group through our proprietary processing platforms. The first six months of FY22 delivered a record result, with GDV growing 209% on the prior comparative period (‘PCP’) to $31.6 billion. While this volume translates to revenues at different rates depending on the segment, GDV indicates demand for EML’s payment services. In the period, EML saw both organic growth in all segments alongside acquisition growth as the firm consolidated the Sentenial Group into the Digital Payments segment from 1 October.

EML achieved record revenue of $114.4 million, which is a growth of 20% on the PCP. Group Revenue yield is driven by segment mix and moved to 36bps as we consolidated the Sentenial Group from 30 September 2021. GPR revenue represented 61% of Group revenues in the first half. The GPR segment supports customers in multiple industry verticals, including digital banking, and government and payroll programs, which have proved resilient in challenging conditions.GPR segment revenue grew organically by 28% to $69.6 million with the segment revenue yield flat at 111 bps.

To provide the guidance, EML has made the below assumptions:

The guidance for full-year FY22 is as below:

The EML share price has found its mojo back in the past month. Despite the underwhelming share price performance prior to the rebound, the company has been plugging away when it comes to its operations. The results show that there have been record numbers that EML has delivered for 1H22. Guidance is strong and there is still growth in the pipeline.

While the acquisitions deal by Bain Capital failed, the contrasting relationship between EML’s operational and financial performance and its stock price means that potential acquirers may be keeping tabs on EML Payments.