ELD trades at $13.32, gaining more than 13% in the previous twelve months. The company’s stock surged as soon as the company announced a trading update on Monday morning. The trading volume is around 535.17K shares approximately, and its current market cap is around 2.08 billion AUD.

The previous year’s results were incredible compared to 2020. However, when the company announced that it was expecting a significant 20-30% increase in its forecasted earnings in fiscal 2022, its stock skyrocketed in the market. 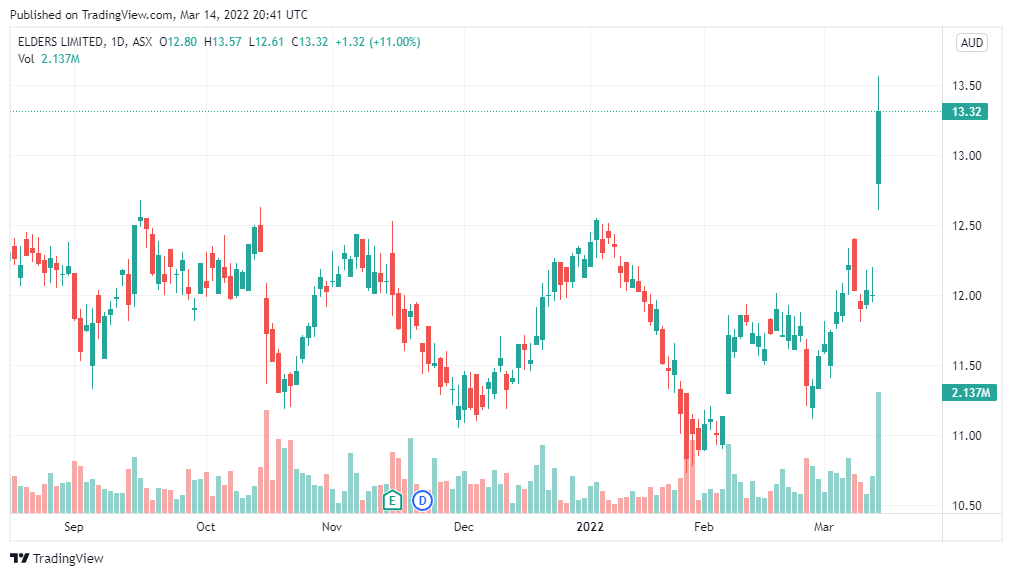 What is causing the surge?

Elders Ltd (ASX: ELD) forecasts FY22 Underlying EBIT1 to be 20%-30% higher than FY21 Underlying EBIT. Based on the middle point of analysts’ forecasts for Elders’ earnings, this forecast is above predicted market expectations.

According to the company, its Retail and Wholesale segments have seen an increase in sales and favourable seasonal conditions compared to the last financial year. However, they assume that most sales are the consequence of increased activity rather than purchasing by primary producers.

Despite lower volumes due to restocking and the abundant availability of feed on the farm, the company noted that its Agency business continues to function well, owing to high pricing in both sheep and cattle. Due to a rise in sales and a high demand for properties, real estate is also beating forecasts.

Acquisition growth and organic growth are all contributing to the surge inactivity. The rest of the business and the business’s costs are basically in line with forecasts. The success of its strategy, the quality of its workforce, and the resiliency of the Australian agriculture industry are once again demonstrated by these outcomes.

According to Mark Allison, Managing Director and CEO, FY22 has already exceeded the company’s performance in the first five months of FY21. He went on to add that they currently anticipate outperforming analysts’ expectations for the entire year to 30 September 2022 and will deliver a significant increase in Underlying EBIT.

It has recently announced several goals that they are working hard to achieve, including 100 percent renewable electricity in all Australian sites by 2025, a 50 percent reduction in Scope 1 and 2 emissions intensity (tCO2e/$m sales revenue) by 2030, compared to the baseline year of 2021 which is subject to financially successful technology being available to address feedlot cattle emissions, as well as consideration of investment in carbon offsets, and Net Zero Scope 1 and 2 emissions by 2050.

Elders (ASX: ELD) expects a significant increase in its EBIT due to an increase in sales in the retail and wholesale segment of its business. They are optimistic, but supply chain interruptions due to COVID-19 and geopolitical events, unforeseen and unforecast changes to seasonal conditions and extreme weather occurrences, and changes in commodity prices are all factors that could affect the results.