Eagers Automotive (ASX: APE) continues to be in the red despite a robust outlook and the acquisition of ACT Group. Find out why!

The company has recently announced that they have acquired the leading ACT dealership group in a press release. The group is expected to bring a good profit for Eagers Automotive as the ACT’s annual turnover is around $450 million. On 23 March 2022, APE announced that they are selling its subsidiary Bill Buckle Auto Group (BBAG) to Australian Motor Group in a $92 million deal. This has caused a severe blow to its stock, and since then, APE stock has been on the decline.

APE stock is trading at $10.67 and has lost more than 28% in the past twelve months. It is crucial for the investors as the company is continuously on a downward trend. The company has a current market cap of approximately 2.74 Billion AUD.

The company will soon announce its results for the first half of fiscal 2022. It had previously announced its fiscal 2021 results, and the results were incredible despite Covid-19 and pandemic constraints. 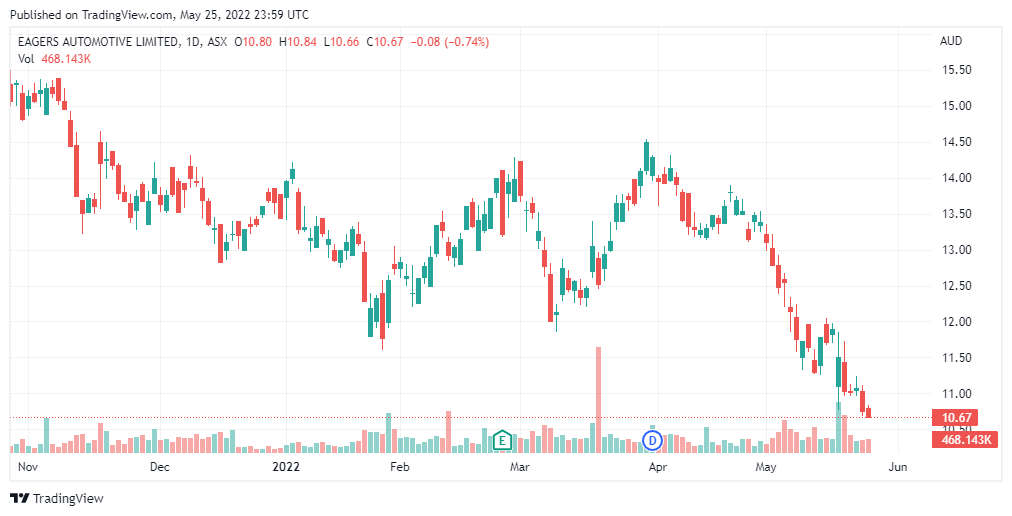 In a recent press release, the company has announced that its management has decided to acquire a portfolio of dealerships and associated properties located in Canberra, Australian Capital Territory (ACT), after a binding agreement with WFM Motors Pty Limited and its associate entities.

The dealership acquired has a portfolio of brands such as Ford, Jeep, Volkswagen, Toyota, Volvo, Subaru, GMSV, and Mitsubishi. It is situated at Fyshwick, Phillip, Gungahin, and Belconnen. The dealership operates across 10 owned properties and three commercially leased sites.

The ACT group’s annual turnover is around $450 million, and it has around 400 million employees. According to the agreement, it will remain with the business ensuring a smooth transition for customers, staff, and its OEM partners.

The acquisition was previously announced on 30 March 2022, and it is expected to be finalised around late July 2022. The total value of the acquisition is around $193 million. It comprises $75 million in goodwill, $110 million in property, and $8 million in net assets.

For the six months ending 30 June 2022, Eagers Automotive expects to make between $183 million and $189 million in Underlying Operating Profit before Tax from continuing operations, compared to $214.8 million in the preceding comparable period on a like for like basis.

Net profit before tax from continuing operations should be between $225 million and $240 million, down from the previous year’s figure of $267.4 million.

External audit assessment of the updated predicted results would be done once the half-year is completed on 30 June 2022.

The stock of APE fell after the company sold BBAG in a non-binding agreement. Strategic acquisitions such as the acquisition of ACT Group will help the company enhance its market share and revenues in the future. The company expects to balance the changing market dynamics with the execution of its Next100 Strategy; they are actively pursuing opportunities aligned with its strategic priorities to provide accretive growth for its shareholders.