Domino’s Pizza Enterprises (ASX: DMP) business model works around the operation of retail food outlets and franchise services. The company is Australia’s largest pizza chain regarding network stores and network sales and is the massive global franchisee of the Domino’s Pizza brand. DMP was founded in 1983 in Queensland, and as of now, its headquarters are in Hamilton, Australia.

DMP slightly declined in today’s regular trading session gaining around 0.50% to reach $79.97. The stock closed at $80.36 yesterday. The current market cap of the company is approximately 6.99 billion AUD. The stock lost more than 48.8% in the last six months.

DMP lost more value since it released its results for the first half of 2022. But the stock is continuously gaining and losing, attempting to reach its previous value when it released its financial statements last week. 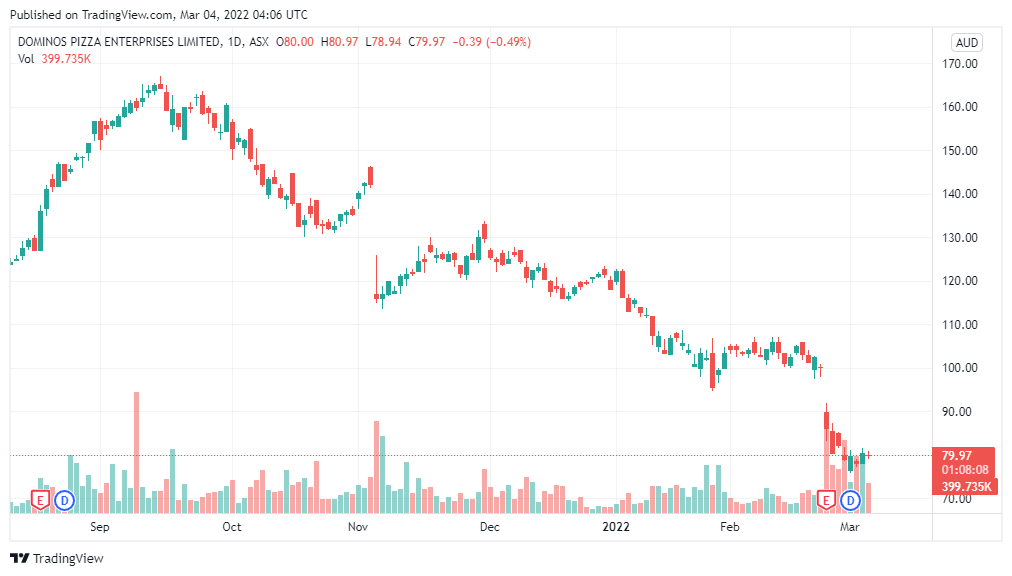 DMP: Reason for the decline in the profitability

The other reason is an increase in operational expenses. DMP’s food, equipment, and packaging costs increased by $64 million. A rise in employee costs of $11 million and a rise in marketing costs of $16 million was revealed by Domino’s Pizza.

Domino’s Pizza Enterprises Ltd. (ASX: DMP) will pay an interim dividend of 88.4 cents per share, or 70 percent franked, to shareholders. This is due on March 17, 2022, with a record date of March 2, 2022. The company is among the consistent companies returning value to its shareholders regularly each year in dividends.

Impact of Covid-19 on DMP

Don Meij, Group CEO & MD, praised the efforts of over 80,000 team members and franchisees who serviced their communities in some of the most challenging conditions the COVID-19 pandemic has yet imposed.

He further added that we expect another excellent year, thanks to our long-term investments that increased during COVID-19.

What’s next for DMP?

The company’s store network expansion is set to reach a record level this year as Domino’s Pizza Enterprises Ltd (ASX.DMP) and franchisees reinvest in a long-term strategy. On target to add 500 stores this financial year, the company and its franchisees added 285 new stores in the first half of the year.

The company is focused on its vision of global expansion. As a result, they plan to add 500 new stores in fiscal 2022. Even though the current year’s profitability was low despite the revenue gain, the company expects robust growth in online and offline sales. Company officials are confident that despite this short-term setback, its operations are far more vital than they were before COVID-19.