Culpeo Minerals Ltd (ASX: CPO) is a copper exploration and development company whose interests are focused on Chile, the world’s largest copper-producing country. The company is focused on exploring potential high-grade copper systems in the coastal Cordillera region of Chile.

CPO stock gained in the intraday trading session on Monday after the company announced its positive results from Lana Corina Project.

CPO stock is currently valued at $0.42 and has seen a sudden increase of around 162% from the previous close on Monday. The current market cap of the company is approximately 18.48 million AUD.

CPO: Reason for the stock gain 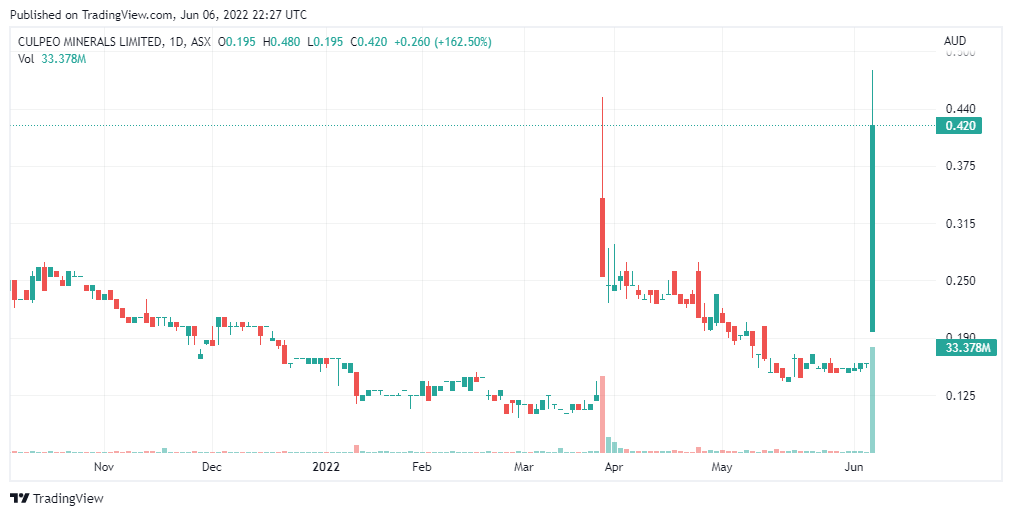 This proves that the mineralisation continues at depth. The drilling also found a broad zone of high-grade molybdenum mineralisation. It shows that the base metal system at the Project has a deeper mineralised source and gives new places to look for minerals.

As the first deep high-grade intercept of molybdenum-rich mineralisation to be found at the Project, this finding is especially significant since it shows that there may be more mineralisation to the southwest of the Lana-Corina-Laura ore belt.

It is a significant breakthrough in the company’s quest for copper exploration because the Lana Corina Project was acquired in late March. The drilling results seem extremely promising as the company is optimistic about the surrounding areas of the site.

Lana Corina is linked to a northeast-trending structural zone that is more than 1,000 metres long and up to 400 metres broad. The first 4,000-meter diamond drilling programme includes nine holes aimed at high-grade copper mineralised zones supported by breccia and porphyry. The business has so far drilled five holes totaling 2,300 metres.

Culpeo Minerals’ share price is increasing fast due to the new updates from the Lana Corina Project. The results show the vast possibility of the abundance of minerals at the project. The company is expecting to gain a high-grade copper zone at the project. This penny stock could be a new mineral stock opportunity for ASX investors.