Core Lithium Ltd (ASX: CXO) is skyrocketing after inking a deal with Tesla

Core Lithium Ltd (ASX: CXO) is developing Australia’s newest and most sophisticated lithium project, the Finniss Project in the Northern Territory. Core Lithium is at the front of the line for new lithium production. The Finniss Project will start producing lithium by the end of 2022. The company was founded in 2010 and is headquartered in Adelaide, South Australia. Its subsidiaries include Lithium Developments Pty Ltd, DBL Blues Pty Ltd, and Sturt Exploration Pty Ltd.

According to the Australian Federal Government, Finniss is one of the most capital-efficient lithium projects and has the most remarkable market logistical chain. The Finniss Project will provide the world with lithium that is high in grade and top-notch quality, best for use in lithium batteries that will power electric cars and store renewable energy.

On 2 March 2022, Core Lithium Ltd (ASX: CXO) announced in a press release that they had inked a deal with Tesla Inc. (NASDAQ: TSLA) for lithium supply. As soon as the news hit the market, CXO surged in the regular trading session and gained 15% from the previous day’s close. The stock was valued at around $0.95 on Wednesday, gaining more than 15% from Tuesday’s closing price. The stock closed on Tuesday at $0.83. On Thursday morning, when the regular trading started, the stock began trading at $1.00. The company has a current market cap of approximately 1.4 billion AUD.

CXO is rising after the company struck a deal with the global electric vehicle manufacturer Tesla. The critical elements of the agreement are as follows: 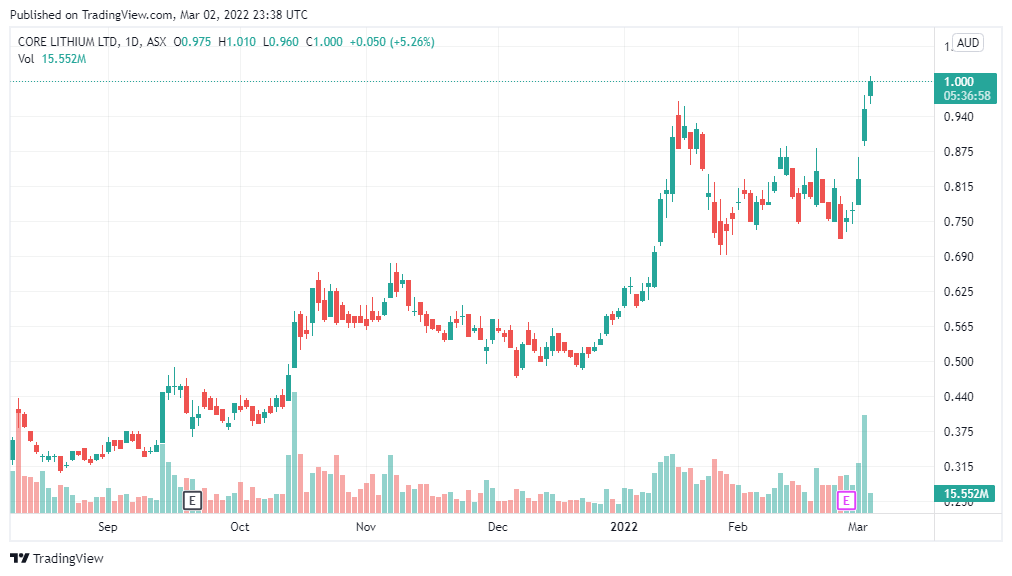 To help Core complete its Stage 3 Expansion and incorporate Core’s lithium chemical product into Tesla’s supply chain, Tesla has agreed to give extra assistance to Core. The deal is subject to the signing of a formal agreement. The deal will help Core increase its productivity and help them learn more about improving the quality of the process.

Currently, Core’s plan for Finniss includes the possibility of a third stage. Downstream lithium chemical processing in the Northern Territory is the focus of Stage 3, which is based on a longer-term development strategy.

The Managing Director of the company Stephen Biggins said that they would supply 110k metric tons of spodumene concentrate over the next four years. Additional four-year binding offtake agreements with current clients have already been announced.

Core Lithium is very excited to establish a deal with the leading electric vehicle brand globally and expects the agreement to last longer than four years. With Tesla’s investment and interest in its plans for downstream processing, the Core Lithium is optimistic about the future of electric cars.

They expect to start the supply in the second half of fiscal 2022, and the agreement will last for at least four years. The deal is subject to the supply for four years or as soon as the Core Lithium completes the supply limit of 110k metric tons.

Core Lithium Ltd (ASX: CXO) hopes to extend the deal with Tesla and continue doing business with the market leader in the global electric vehicle industry.

Core Lithium Ltd (ASX: CXO) is a pre-revenue company, and its deal with Tesla is the biggest deal they could crack in the current scenario. The deal will give them incredible momentum at the start of the year. It will also help them gain more international corporate clients as new players in the electric vehicle market are entering. The stock is surging, with CXO gaining over 20% within two days of the deal announcement.