Coles Group Ltd (ASX: COL) is an Australian publicly traded corporation that owns and operates several retail chains. The company was established in 1914 and had its headquarters in Melbourne, Australia. Coles Supermarkets, Coles Express, Liquorland, and several other businesses are part of the Coles Group.

The company’s primary businesses include selling food and groceries via its main supermarket chain Coles and the sale of liquor and gasoline through its Coles Liquor and Coles Express locations, among other things.

Currently, COL values at around $18.28 and has gained more than 3% after a week’s crash. Its stock closed at $18.18 on Thursday. The current market cap of the company is around $24.29 billion. Its trading volume is approximately 4.30 million shares.

The stock rallied up in today’s trading session after facing a crash on Wednesday. 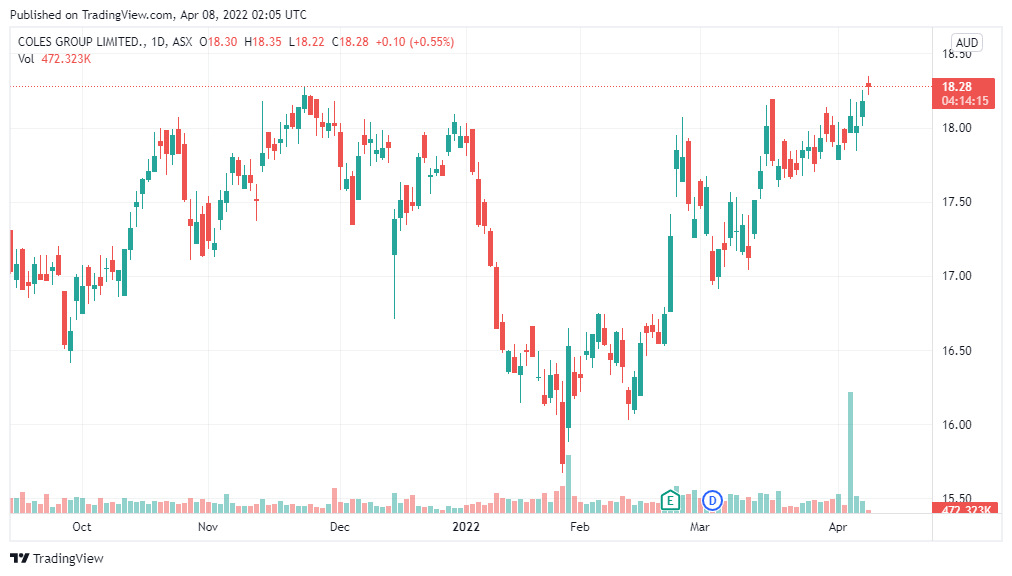 The physical stores closed due to the pandemic, giving rise to the e-commerce industry, and the businesses saw a massive spike after the first half of 2020. Australia is a flag bearer of urbanised societies globally and has around 25 million population, of which 90% reside in urban areas such as Melbourne, Sydney, Brisbane, Perth, and Adelaide. Digital advertisement, an increase in influencer marketing, and brand awareness rate have been the critical factors in the growth of the retail industry in Australia and all over the world.

According to the statistics, the Australian retail industry’s turnover in 2020 was around AUD 349 billion. Industry experts expect the retail industry to grow at a compound annual growth rate of 5.5% until 2026. Coles Group is the second-largest retailer in Australia after Woolworths. Woolworths holds a market share of 37.4%, while Coles Group’s market share is about 25%.

Why the sudden rise after a decline?

The share of COL stock declined in the market after its major shareholder and former parent company, Wesfarmers Ltd. (ASX: WES), sold its shares.

This created a sense of uncertainty among the investors about whether the former parent company and most stakeholders had lost faith in the company. According to sources, the company had sold around 28.2 million or $500 million worth of COL stock with a bit of discount as per the previous close before Wednesday. 6 April 2022.

The stock declined for a couple of days, but today at the beginning of Friday morning, its stock surged in the market. Currently, its stock values at around $18.28, gaining more than 3% from the previous close. The stock previously closed at $18.18 at the end of the last trading session, with a trading volume of around 4.30 million shares.