Breville Group Ltd (ASX: BRG) is declining after the company announced the acquisition of Lelit – worth 113 million euros. The company has decided to enhance its coffee business. But it’s not a surprise that the company has lost value in announcing its acquisition. The reason is apparent; the company did not provide any details about the financial position of Lelit and its past revenues and profitability data, due to which it isn’t easy to analyze whether the deal is in favour of BRG’s investors or not.

Breville Group Ltd (ASX: BRG) is among Australia’s leading companies in manufacturing home appliances. The company is headquartered in New South Wales and was founded in 1932. Its subsidiaries include Breville, Ronson, and Kambrook. BRG exports home appliances across the world.

Currently, BRG is trading for $26.24, shedding around 0.74 or 2.74% in its value compared to the closing price on Thursday evening. The stock previously closed at $26.98 with an average trading volume of 377.23K shares. The current market cap of the company is around 3.66 Billion AUD.

Although the company did not provide any information about the Lelit profit and loss statement, and if we analyze the previously announced financial results of BRG, it stands at strong financial foundations. 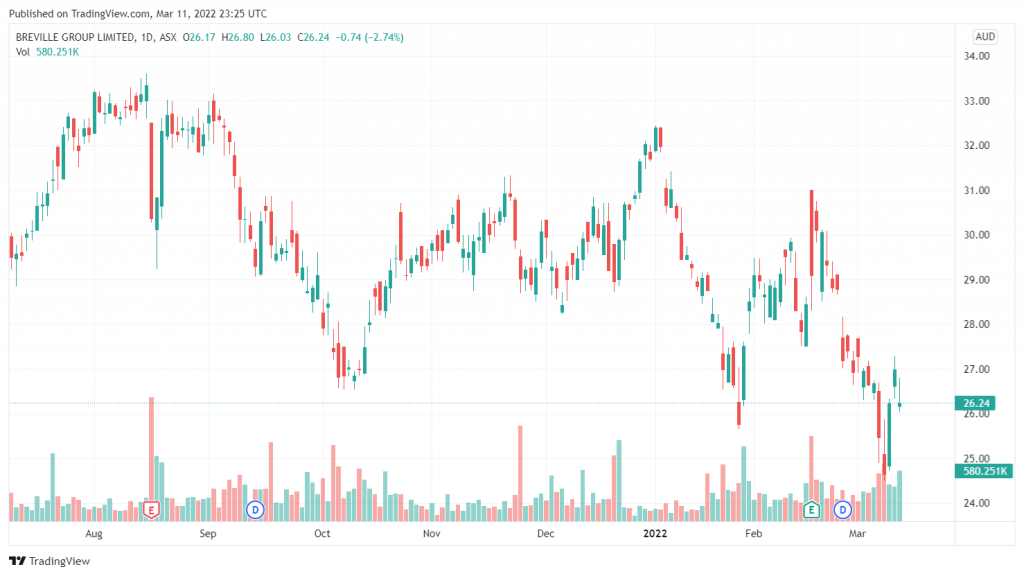 Breville Group Ltd (ASX: BRG) lost significant value in the market after it announced on 11 March 2022 the 100% acquisition of Lelit, which is Italian based prosumer speciality coffee group. Breville Group expects that the deal will be at the start of July 2022 after the pre-acquisition restructure of the Lelit Group.

As a result of its roots in Italy’s Castegnato, LELIT has grown to become a global leader in premium prosumer home coffee equipment design, manufacturing, and distribution. Combining LELIT’s espresso machines and grinders with Baratza’s grinders strengthens LELIT’s position in the speciality coffee market while also opening up new markets outside of Europe. Having a wide variety of products will allow the company to reach more customers and gain more market share.

Breville has agreed to buy the LELIT group from its founders and present owners for a total value of about €113 million.

This will be paid in cash and by fully paid ordinary shares of BRG valued at A$27.64 per share, with a five-year trading lock. BRG will use existing cash reserves and debt facilities to pay for the cash component.

According to Breville Group CEO Jim Clayton, the acquisition of LELIT brings together two great coffee cultures: Italy and Australia. They look forward to working with LELIT and its existing partners to accelerate its growth and product innovation while maintaining its Italian identity.

BRG estimates EBIT for the whole fiscal year of 2022 will be consistent with the market’s current forecast of $156 million. A dramatic shift in economic conditions and no more supply chain interruptions are expected in the second half of the year.

Breville expects supply chain barriers and inflationary pressures to persist. As a precautionary measure, the company has announced that it will begin stockpiling inventory for the upcoming peak season in FY23.

Breville’s financial position was strong during the first half of 2022, and its stock surged in the market. But yesterday, the company announced the acquisition of Lelit to enhance its presence in the coffee equipment market. However, investors are not sure whether the acquisition will benefit BRG or not – resulting in BRG shares sliding.