BlueScope is the world’s leading metal coatings and paints manufacturer for the building and construction industries. The Group’s products include prepainted COLORBOND steel, zinc/aluminium alloy-coated ZINCALUME steel, and the LYSAGHT line of building products, which are primarily sold in the Asia-Pacific area.

Pacific Steel, a division of BlueScope, is responsible for the production and sale of long steel products in New Zealand. BlueScope services customers in the building and construction, manufacturing, transportation, agriculture, and mining industries in Australia and New Zealand. Customers in Australia can purchase BlueScope’s steel products directly from the company and through a network of service centres and steel distributors.

BSL has been stagnant in the last six months

BSL has recently announced the first-half results of fiscal 2022. But despite announcing robust financial results, BSL has been declining for the last six months. Its stock has lost more than 15% value in the previous six months. 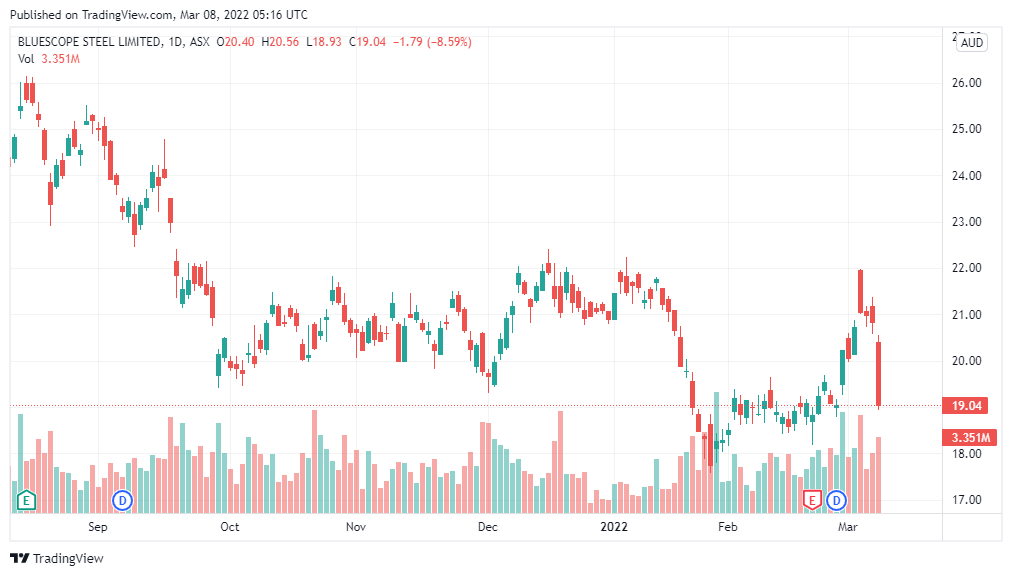 BlueScope’s underlying EBIT for the first half of the year was $2.20 billion2, which was by far the most robust half-year performance the firm has achieved in its 20-year history as a publicly-traded company.

Demand in important categories, particularly in the building and construction industry, has been strong, and this has been accompanied by particularly strong margins, which have been boosted by higher steel prices in Asia and the United States.

According to current forecasts, BlueScope’s underlying EBIT for the second half of FY2022 would be between $1.20 billion and $1.35 billion, which would rank second only to the last half of the company’s 20-year listed history.

Non-controlling interest profit is expected to be lower in the second half of 2022 than in the first half of FY2022.

Several variables can affect these expectations. In particular, the effects of pandemics on business operations, supply chains and demand, price, and spread volatility in steel have been identified as being of deep concern due to the current geopolitical situation, which is also a factor.

Despite reporting a strong financial performance last month, BSL shares are continuously declining in the current market environment. The BSL stock price declined today without any significant news except for the company announcing its share buyback program. The FY22 share buyback programme had repurchased 13,594,756 shares at an average cost of $20.94 (including $0.3M in brokerage expenses) as of December 31, 2021.