BHP Group Limited (ASX: BHP) is the most valuable Resource stock listed on ASX; here is why?

BHP Group (ASX: BHP) is an Australian-based global mining and resources corporation that operates in Australia, Europe, China, Japan, India, South Korea, North America, and South America. Copper, iron ore, and coal are some of the company’s primary products. The company was formed in Melbourne, Australia, in 1851 and is headquartered there.

BHP stock is currently trading at $47.83 and has increased by around 5% percent since the previous week. The company’s current market cap is approximately 238.8 billion AUD, making it the most valuable resource company globally. 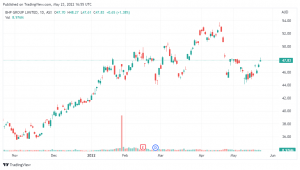 BHP Sits on the Throne Alone

BHP (ASX: BHP) is currently operating projects globally on various commodities. Its top-notch results-driven projects consist of iron ore, responsible for 52% of revenue, copper 27%, and coal 17.7% of revenue. BHP could have capitalised on the petroleum products if it were not selling its stake to Woodside (ASX: WPL).

Olympic Dam copper mine in Australia, copper, gold and silver mine in Minera Escondida, iron ore mine in Samarco, and some other mines in Western Australia are its top-notch projects.

Do these Projects Benefit BHP?

We can see that BHP has most of its stake in iron ore and copper. They bring the majority of revenue to the company. Iron ore and copper are two essential elements of industrial production. Iron ore is required in steel production, while copper is used to manufacture wires and electric generators. Prices of these resources vary in the market due to the fluctuations caused by the market conditions. These variables affect the profitability of the company.

Australia has recently seen a spike in the iron ore export. The reason could be linked to the massive demand by China for the production of steel. BHP exported the biggest number of iron ore in its history in FY21. Similarly, BHP’s copper exports also soared. China was among the leading importer of its copper in FY21.

After the West imposed economic sanctions on Russia, it created a huge gap that needed to be fulfilled. BHP capitalised on the opportunity and has done massive exports of iron ore and copper. As a result, the company had crossed $100 billion in annual exports for the second time in its history. Its massive financial numbers and clientele attract new corporate customers for it and the number of mines it has across the globe.

If we look at the chart, the last month was not good due to the fluctuation in the share price of BHP stock. But if we see the six months data, BHP stock has gained over 25% in the previous six months. Some decline could also be seen in the 5-years chart due to the covid-19 pandemic, but the BHP stock has emerged from that decline and is trading well above the pre-corona period.

BHP Group expects US$67 Billion in revenue and $42.5 Billion in EBITDA for fiscal 2022. The numbers estimate an 11% and 14% increase, respectively. The company’s cash flows are

dependent on the prices of iron ore and copper.