As a result of the consistent stream of distributions paid out by dividend stocks, they are an excellent choice for long-term investors. Dividends are generally regarded as a dependable source of revenue by the people. Dividends are more tempting to some investors than the company’s overall capital growth. Generally, investors appear to prefer dividend-paying stocks over the long term. As a result, investors pay close attention to the details when a new dividend announcement is made public. Dividend announcements are sometimes interpreted as a sign that a company’s financial data is becoming more favourable. The amount of dividends paid out by a firm is not the sole factor determining its stock market performance. Despite a challenging beginning of the fiscal year 2022, dividend-paying stocks have become increasingly popular. The new variant has caused customer confidence to erode, and there are now difficulties in the supply chain. Another contributing element to this reduction is Russia’s invasion of Ukraine. The best-performing firms one week are at all-time highs, and then the next week, there is a considerable amount of selling pressure on the stock market. This is because dividend stocks provide investors with both income and security. Many well-established organisations give dividends to their shareholders, which is crucial in determining dividends’ long-term stability.

Pendal Group is a financial advisory business that specialises in alternative investments. Fixed interest funds, property, security, and Australian share funds are areas where customers may invest in providing greater returns than they would obtain in the stock market. Currently, the company manages $107.9 billion of funds under management, a 14% increase from the previous year. They were founded in 2007 and listed on the ASX in the same year. The company attributed a 19% reduction in the firm’s share price to the pandemic last year. As a result, it prevented them from establishing new business contacts with potential customers. Annual reports from the company stated in detail how its investment leaders’ intellectual capital, which is the actively-managed funds they give to customers, is their only offering. They acknowledged that their inability to meet face-to-face with customers and colleagues had had an effect. They consider human connection crucial in thoroughly analysing their clients’ demands. Pendal Group’s share price traded at roughly $7-8 per share until the pandemic. Last year, the stock price fell by 19%. Pendal group does pay a pretty decent dividend. Over the previous five years, Pendal Group’s five-year dividend yield has been 7.8%, and the average dividend per share has been 44 cents. A 7.6% dividend yield is now being offered on the company’s past year’s total payout of 41 cents per share. On the other hand, the dividend yield is visibly skewed due to the stock’s 52-week low price. Pendal’s dividends are typically paid in May and December of each year, and the company is looking forward to this year’s dividend payments. Investors may anticipate a dividend raise of 11% to 45 cents per share this year. Currently, PDL stock trades at $4.52. Its market cap is around $1.73 billion. When the epidemic is over, Pendal may see its customers and do new business, so there is every reason to expect that the firm will be back where it was before. On the other hand, its management is steadfast in paying its shareholders a regular dividend. 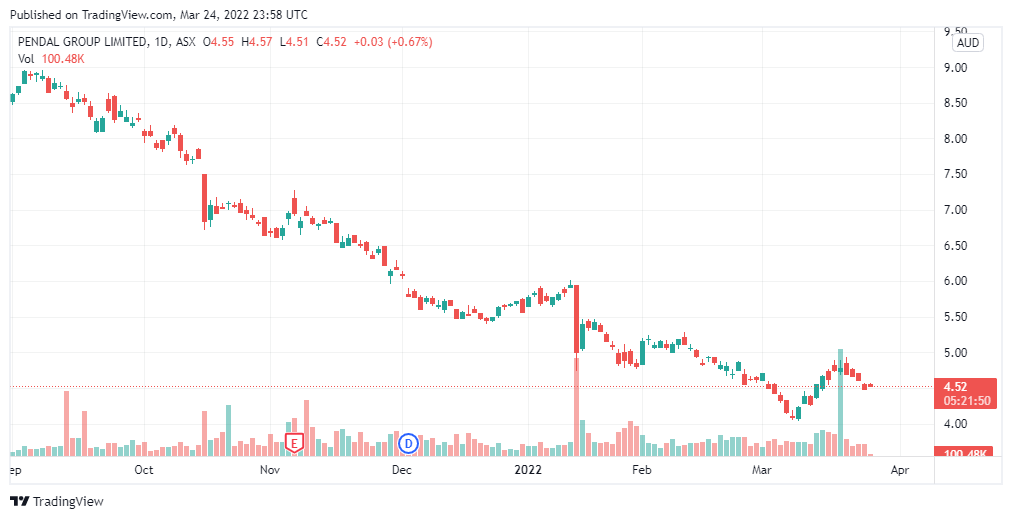 Spark New Zealand is New Zealand’s largest telecommunications and digital services company. Mobile, internet, cloud, and managed data and networks are just a few of the services offered by the company. Originally known as Telecom New Zealand, the company changed its name to Spark 2014 and went public in 1990 in New Zealand before being listed on the Australian Securities Exchange in 1999. Additionally, it is also traded on the New York Stock Exchange. Like Telstra, Spark pays dividends twice a year, usually in March and September, and has shown to be a dependable dividend provider. The firm recently released 1H 2022 results. In the first half of this year, revenues were $1.8 billion, which grew by 5.2% compared to the same period last year. Compared to the first half of 2021, EBITDA increased by 7.6% to $538 million. NPAT was about $179, up more than 21% from the first half of 2021. Spark distributes its dividends every two years. Ordinary dividends of 12.5 cents per share were paid out in the second half of FY21. Total dividends issued for the fiscal year of FY21 were 25.0 cents per share, which is 100% franked. Investors who want to reinvest their dividends may do so at no additional cost. When issued, dividend reinvestment plan shares will be issued at the current market price. Investors who have bought its shares before September 20, 2021, can participate in the dividend reinvestment plan for the H2 FY21. SPK’s share price is $4.33, and the firm has a market capitalisation of $8.35 billion. Since 2003, they have been paying dividends to their stockholders. Spark’s last five-year dividend yield is 6.45%, and its five-year average dividend per share is 24 cents, making it a solid dividend investment. 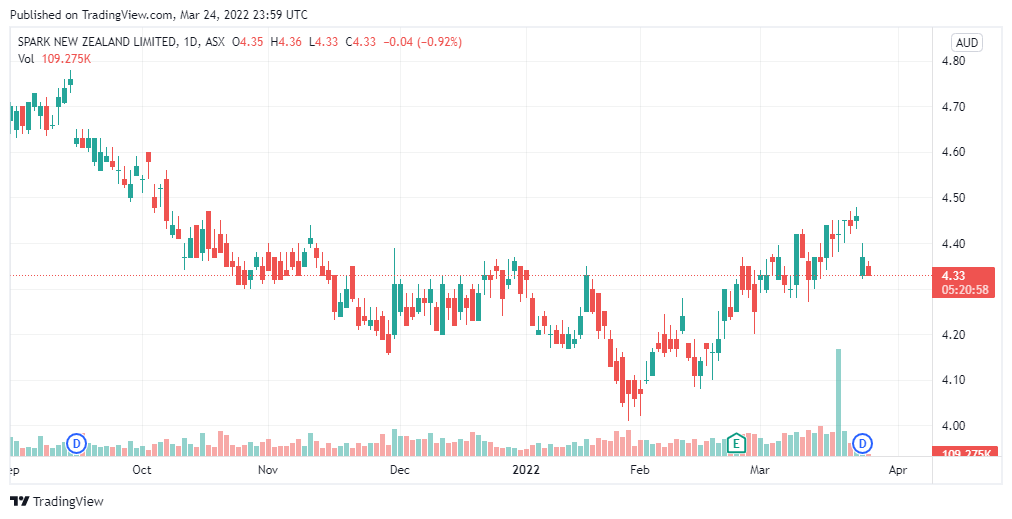 Globe International is an apparel, footwear, workwear, and hard goods manufacturer and distributor. Three Australian brothers started it in 1985. Globe International’s core business is divided between proprietary brands, licensed brands, and distributed brands. The company recently announced its half-year financial results, which concluded on December 31, 2021, along with its dividend payment. There has been a 33% increase in interim dividend payments from the 2021 financial year to this year’s 16 cents per ordinary share. The increase in dividends implies an NPAT payout ratio of 53%, according to an ASX announcement. Globe International performed profitably amid booming retail sector execution. Overall, net revenues during the first half of fiscal year 22 increased by 15% over the prior year’s comparable period. On top of that, the EBIT was $18.2 million, or 12.7 percent of net sales; the NPAT was $12.5 million. The Group expects to boost wholesale and retail pricing in the second half of this financial year to offset the impact of rising freight costs on its gross profit margin. Currently, GLB shares trade at $5.00. GLB’s market cap is about $207.32 million. On March 25, 2022, the dividend will be paid to shareholders. 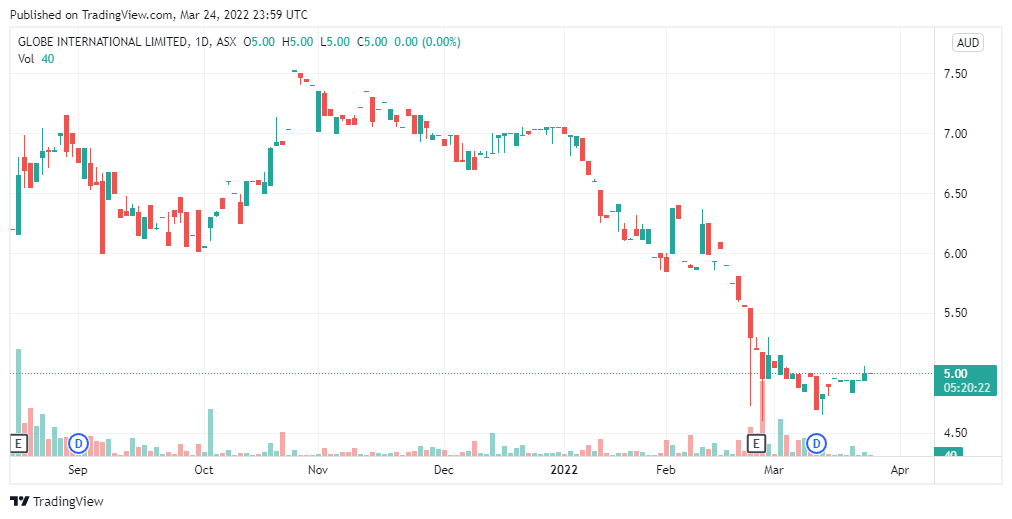