Austal (ASX: ASB) Shares gained 25% in a single day after Striking a deal worth US$3.3 Billion with USCG

Austal Ltd (ASX: ASB) is an Australian shipbuilder and defence prime contractor that provides services worldwide. They are engaged in designing, building, and maintaining some of the world’s most modern commercial and defence vessels. In its three decades of history, Austal has contracted more than 300 vessels for 100 commercial and defence clientele in 54 countries.

The company is the first ASX-listed shipbuilder and is Australia’s largest defence exporter. The company has grown to become the world’s largest aluminium shipbuilder. Austal has another privilege that it is the only foreign-owned prime contractor designing, constructing, and sustaining ships for the US Navy.

Austal shares are flying high in the market after USCG awarded Austal a contract with a potential value of US$3.3 billion or A$4.35 billion.

ASB shares are skyrocketing after closing a deal with USCG. ASB stock is trading at $2.25, increasing 25% in a single day. The current market cap of the company is 811.93 Million AUD. 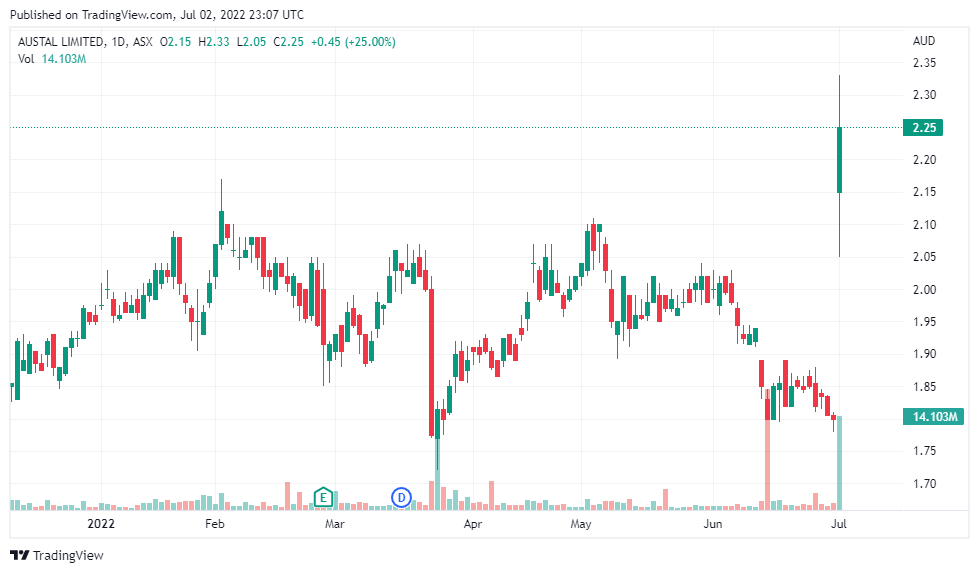 Why are ASB Shares Skyrocketing?

When Austal announced it had been awarded a contract worth US$3.3 billion or 4.25 billion AUD by US Coast Guard, investors showed tremendous excitement. As a result of which, ASB shares have reached an 11-month high.

According to the contract, Austal will design and construct 110-metre Offshore Patrol Cutters (OPC) for the United States Coast Guard (USCG). The vessels will be constructed at Austal USA’s new USD100 million steel shipbuilding facility in Mobile, Alabama.

The construction of the vessels will begin in 2023, with an option to construct 10 ships further.

The new OPCs will be used by USCG in Law enforcement, migrant and drug interdiction, and search and rescue missions. The Cutters will also serve Arctic goals by helping control and safeguard new commercial and energy development activities in Alaska.

As a consequence of the new contract, the company expects its FY2022 EBIT will be higher than the previously forecasted $107 million. The company can’t quantify the impact but will update its shareholders as soon as the new EBIT is calculated.

He further added that the new Offshore Patrol Cutters for the US Coast Guard are a great chance for Austal USA to show off its new steel shipbuilding skills. These skills are based on years of proven construction experience with the LCS and EPF programmes for the US Navy.

After winning a massive contract worth US$3.3 billion, Austal has strengthened its position. Investors were seen interested in the ASB stock, and the share price skyrocketed. The company has built a new steel shipbuilding facility worth $100 million, which will be utilised to construct the OPCs. If the plan is executed correctly, it could allow the company to expand into the European market.