As a general rule, investors seek to reduce their overall investment risk by increasing their holdings in financially healthy companies. The term “blue-chip” refers to stocks related to companies with steady cash flows and significant activities. Compared to their rivals, these stocks are better positioned in the event of market uncertainty.

Savvy and long-term investors like to place their money in blue-chip firms because of the consistency of their cash flow and the strength of their financial statements. Another benefit of investing in a well-established company is that they can withstand market fluctuations than smaller businesses.

Another feature that draws investors’ attention to these large corporations is the monthly dividend. Blue-chip companies are well-known for their reliable dividend payments, resulting from their steady inflow of profits. They have well-established enterprises with steady cash flows, strong balance sheets, and experienced management. Historically, blue-chip stocks have outperformed the benchmark index. Investors consider blue-chip companies in their portfolios because of the higher returns and reduced risks they come with. To illustrate, we will look at three blue-chip ASX-listed companies with the best dividend yields.

REA Group Ltd (ASX: REA) is the biggest online real estate advertising company expanded globally. The Group is spread across Australia, Asia, and North America. Its subsidiaries include REA Group Europe Ltd, Property Look Pty Limited, UK Property Shop, and others. The company was founded in 1995 and is headquartered in Richmond, Australia.

The company reported strong growth in revenue on account of increases in all major lines of business. According to REA, it was a strong market recovery despite the impact of Melbourne and Sydney lockdowns in the first quarter.

The REA Group, an ASX-listed property listing firm, has declared a record dividend after a significant increase in profits in the first six months of Fiscal Year 22 compared to the previous year. The company issued an interim dividend of 75 cents per share. It is a 27% increase over the previous interim payout of 59 cents a share, making it the most significant payment in its history.

REA Group’s sales jumped 37% to AU$590 million, and EBITDA jumped 27% to AU$368 million in the six months ending December 31, 2021. Profits grew to AU$226 million, up 31% over the previous year’s net income. Even excluding acquisitions, ore operating costs climbed by 17% over the period under consideration. According to the company’s notification to the ASX, the Group’s results will incorporate the consolidation of REA India as of January 21 and Mortgage Choice as of July 2021, among other things. If these acquisitions are taken out of the equation, core revenue grew by 25%, EBITDA including associates grew by 27%, and Net Profit after Tax (NPAT) by 33%.

After the COVID-19-induced limitations were eliminated, the firm seems to have benefited from increased demand from real estate buyers. Owen Wilson, the CEO of REA Group, said that the company’s first-half results were remarkable as the company continues to manage the effects of the worldwide epidemic. Real estate website realestate.com.au was swamped with new listings when the COVID limitations were lifted, sellers recouping the time they had spent in lockdown and capitalising on the strong buyer demand. He also said that he was pleased to see the company’s sales expand at such a rapid pace.

The stock trades at $135.23, gaining more than 0.7% from the closing price on Tuesday. In the past year, the company’s stock fell by nearly 4.7%. The stock was down nearly 21% year-to-date. The stock has grown massively by 142% in the last five years. The current market cap of the company is around 17.75 billion AUD. 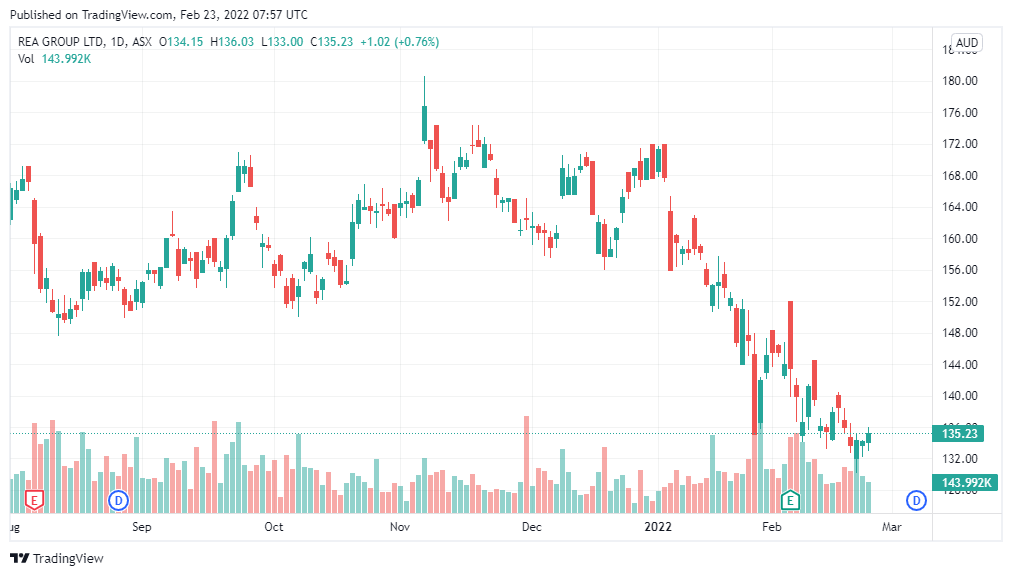 NAB reported a net profit of $1.8 billion. Cash profits grew by 12% in the second quarter of this year compared to the same period last year. During the first three months of the year, NAB’s net interest margin decreased by five basis points to 1.64 per cent. Over the three months ending in December 2021, residential lending rose 2.6%, SME business lending climbed 3.4%, and they gained market share in their core loan and deposit products in Australia. Over the same period, New Zealand’s loan growth was similarly robust, rising by 2.2%.

For investors and homeowners, NAB saw a 1.6% monthly rise in December 2021, the most among the leading four banks, according to a report from Australia’s Prudential Regulatory Authority.

Four Australian banks have struggled under lockdown, but their financial year 2021 results seem to have pleased the market. A strong property market and lower-than-expected pandemic-related expenditures helped the banks produce FY21 profits of AU$26.8 billion, a remarkable 55% gain over the previous year. As a result of solid share repurchase plans, these banks’ Return on Equity (ROE) has increased from 6.6% to 9.9% in the last year.

In 2022, dividends paid out by the National Australia Bank may climb. 2021 dividend payout from Australia’s second-largest listed bank by market value was $1.27 per share. A 6.1% dividend yield was added to the NAB share price by adding franking credits. If the company’s profits are completely franked, NAB investors might get a dividend yield of 5.1%. This year’s payouts from NAB are still uncertain. The bank aims for a payout ratio of 65 to 75%.

Currently, ASX: NAB trades at $30.13, gaining more than 0.4% from the closing price on Tuesday. In the past year, the company’s stock gained by nearly 21%. The stock was up nearly 2.48% year-to-date. The company’s current market cap is around 99.59 billion AUD, making it the second-largest bank in Australia. 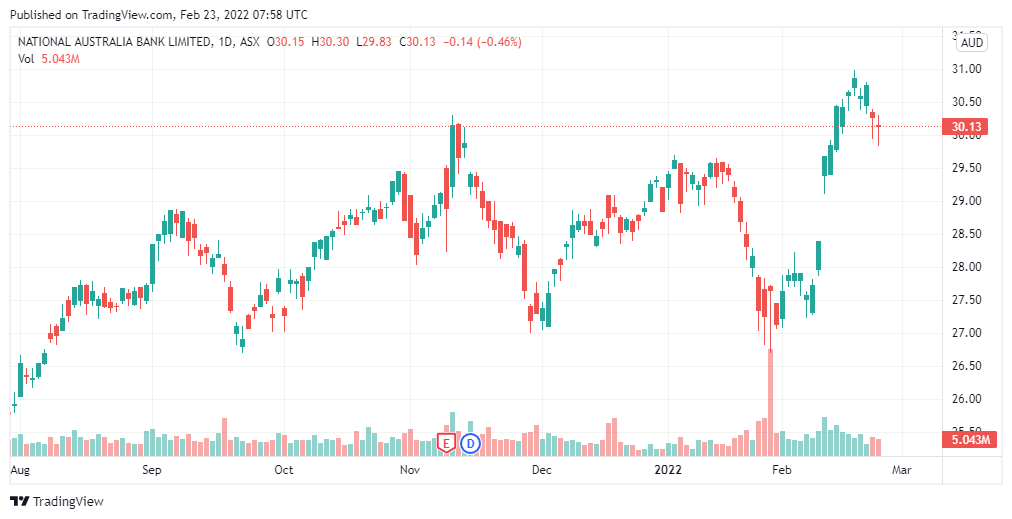 As one of the world’s most extensive and most diversified makers of building materials, Brickworks Building Products is a global leader in the construction industry. Brickworks Limited has a lengthy and continuous history that dates back to 1934, making it amongst the longest-running company in the world. The company’s headquarters are in North-South Whales, Australia.

With revenue of $890.31 million and a net loss of roughly $239.16 million, the fiscal year 2021 ended with a 6.28% decline. Forty cents per share was chosen as the fully franked dividend for the fiscal year of 2021. An additional 2 cents or 3% has been added to the dividends for the year, totalling 61 cents. Over the last 45 years, the company’s dividends have increased. They were one of the few ASX200 firms that increased dividends without expanding equity or requesting aid from the government to their credit.

It is all because of its diverse business model and excellent financial position. It is projected that the company’s borrowing level had remained at just 21% by the end of the fiscal year 2021, despite their enormous investment plan.

For Brickworks’ first half of fiscal year 22 (FY22), the company expects to generate record property profits in the region of $290 million to $310 million in the absence of any additional transactions in the first half of FY22, according to the company’s statement a month ago. In fiscal year 21, the total was $253 million.

BKW trades at $21.59, gaining more than 0.4% from the closing price on Tuesday. In the past year, the company’s stock gained by nearly 15%. The stock was down nearly 12% year-to-date. The current market cap of the company is around 3.35 billion AUD. 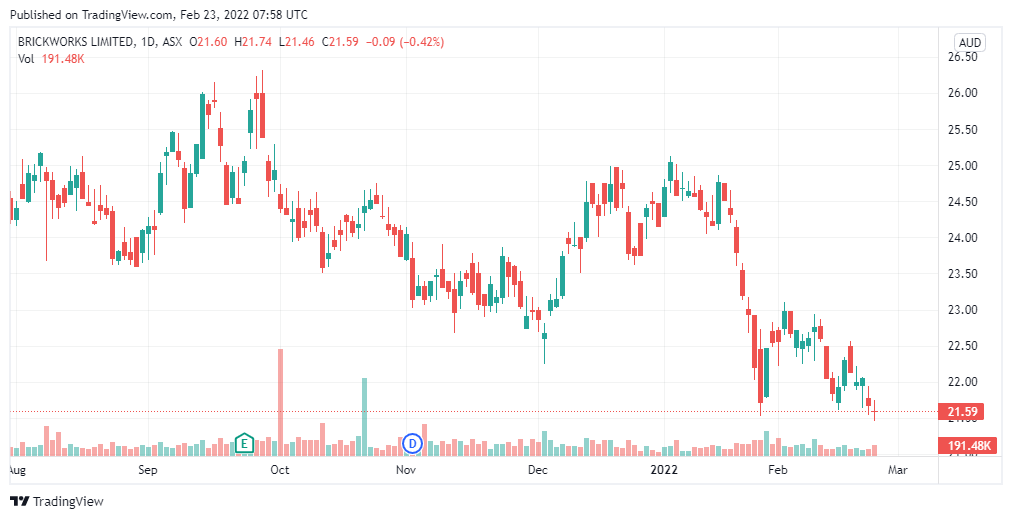