Arafura Resources Limited (ASX: ARU) is an ASX-listed Australian-based mineral exploration company concerned with rare earth elements. The company was founded in 1997 and went public in 2003. It is headquartered in Perth, Western Australia. Its most significant project is the Nolans Rare Earth Project, located on Australia’s Northern side.

The stock of ARU has been rising in the market after the company recently announced its quarterly updates in late April.

Recently the company has announced some progressive news due to which its stock is skyrocketing. The company announced receiving $30 million in funding from Government. The company recently announced cooperation with the Korean Government Agency and its financial results for the first half of 2022.

ARU currently trades at $0.37, gaining more than 105% in the Trailing Twelve Months. The current market cap of the company is approximately $565 million.

The company recently, in March, reported results for the half-year ended on 31 December 2021. Its stock has been rising in the market since the demand for rare earth elements increased. 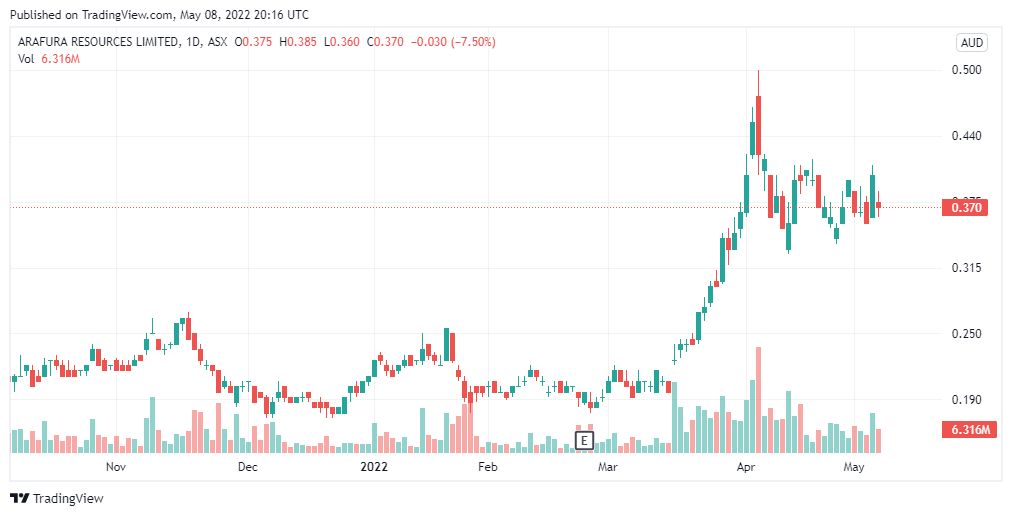 ARU: Important Updates of the Quarter

First of all, NdPr’s spot price reached multi-year highs backed by the reasons such as supply bottlenecks and high worldwide demand for magnets during the third quarter. As a result, its prices jumped by 14% from US$133 per kg to US$152 per kg in the recent quarter.

It is part of a 10-year plan to make Australia a regional resource technology and essential minerals processing powerhouse. The MMI bolsters ongoing funding from the Australian Territory and exporting partner governments for Nolans.

ARU and KOMIR inked a Deal

As part of the development of Arafura’s Nolans Project, the company has signed a Joint Statement of Cooperation with the Korean Government Agency KOMIR, which will aid in exporting Nolans-produced products to the Republic of Korea. There will be an increased emphasis on sharing information on the Nolans project’s progress with Korean investors, rare earth imports into Korea, and the use of strategic stockpiling for both Arafura and KOMIR. The Nolans NdPr Oxide project is moving towards getting FID in 2022.

ARU: What the future holds

The company is moving forward to strategise its funding. The company is satisfied with Nolans project’s alignment with the Critical Minerals strategy of the Government. This will surely boost the image of the company’s corporate social responsibility.

As the world is moving forward towards embracing the consumption of green energy for economic and environmental concerns, the demand for lithium is increasing side by side. The increasing lithium prices are consistently affecting the lithium stocks in the market, and all lithium stocks have seen a significant rise in their value. Investors are optimistic about its performance and expect that the company will soon strike a deal with some significant company in the future to supply lithium or other rare earth elements.