Appen is a data-providing and improving company that develops the data used for machines learning and Artificial Intelligence (AI) products. The company is listed on ASX under the ticker symbol APX. The company is headquartered in Chatswood, Australia, founded in 1995. Its subsidiaries include Leapforce, Inc., Figure Eight Inc., Mendip Media Group Limited, Quadrant Global Pte Ltd, and Appen Butler Hill Pty Ltd.

Its main business comes from selling services to its valued customers. The 2021 reports show that 80% of its revenue came from its top 5 customers. The stock of the company crashed today after announcing its fiscal 2021 results.

Currently, APX values at around $6.11 and has declined more than 28% after announcing its fiscal 2021 results. Its stock closed at $8.57 on Wednesday. The current market cap of the company is around AUD 759.37 million. Its trading volume is approximately 1.22 million shares.

APX is down 28% after announcing fiscal 2021 results

The company’s revenue grew in 2021, but the NPAT declined in the period due to which the stock is down in the market today. 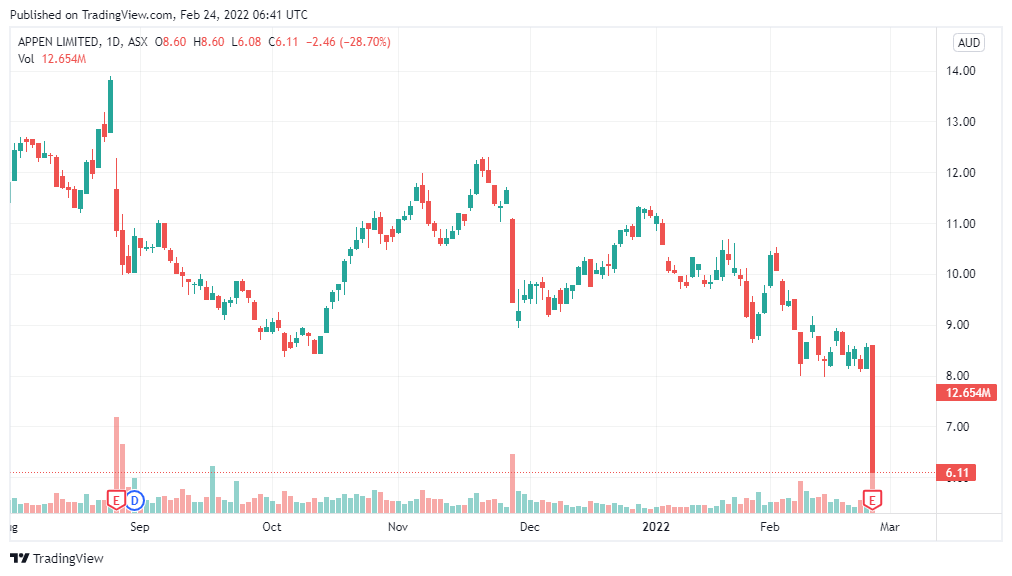 On February 24, 2022, the company announced a final dividend of AU 5.5 cents per share for the fiscal year ended on December 31, 2021. To pay the dividend, the profits reserve is to be used as a source of funds. The record date for calculating dividend entitlements is March 1, 2022, and the payment date is March 18, 2022, with the dividend being paid on March 18, 2022. In the financial accounts for the year ending December 31, 2021, the financial impact of these dividends has not been taken into consideration; however, it will be considered in later financial periods.

Despite lockdowns in several of their operating locations, their worldwide operations remained robust throughout the year. Its technologies and solutions allow crowd workers and employees to operate from anywhere. As a security measure, they extended the possibility to work from home until March 31, 2022. The hybrid model, where employees may work from home while still benefiting from the advantages of collaboration and cooperation, is expected to return when it is safe to do so.

In the wake of the COVID-19 outbreak, the world economy is still suffering, and it is unclear when it will fully recover. Before signing this report, the group had not received any government funds of any kind.

Appen has set the following revenue, profitability, and business mix objectives for FY26 as part of its long-term strategy.

The company will invest in new products, sales and marketing, collaborations, and M&A prospects to increase revenue over the long term. EBITDA margins and dividend distributions might be affected by their long-term sales emphasis in the short term.

Short-term quantitative EBITDA guidance has been discontinued in light of its long-term focus. In February 2022, their revenue order book was 190 million dollars, including orders in hand. The half-year 2022 revenue skew is likely similar (excluding FY20).

A new transformation office, product and technology investments, and share-based payment expenditures will drive up costs in 1H 22. Consequently, 2H 22’s profits will be more skewed than they were in FY21.

The company’s revenue grew in fiscal 2021, but the net profit after taxes was low compared to the last year. The decline in net income is due to the increase in the cost of sales. As a result, its stock declined. The company has provided its outlook, and it expects to significantly improve its revenue and performance in the upcoming years.