Strong operational performance, good growth profile and stellar dividends! A "Buy" from us

Zimplats Holdings Limited (ASX: ZIM) engages in the production of platinum and associated metals mined from the Great Dyke in Zimbabwe. The company produces platinum, palladium, rhodium, iridium, and ruthenium, as well as nickel, gold, copper, cobalt, and silver deposits. Platinum and palladium are vital components in autocatalytic converters which play a significant role in controlling air pollution by reducing emissions in both gasoline and diesel engines. Zimplats is one of the highest dividend yielding stocks on the ASX with a current annual yield of 9%. With favourable platinum and palladium prices, the dividends can only get better in the future.

Zimplats is not just one out of the bottle. The Company is a subsidiary (87% shareholding) of one of the world’s leading producers of platinum group metals (PGMs), the South African based and listed Impala Platinum Holdings Limited (Implats), which contributes approximately 25% of global platinum output.

The Company’s majority owned operating subsidiary is Zimbabwe Platinum Mines (Private) Limited, which is a significant producer of PGMs, exploiting the ore bodies located on the Great Dyke in Zimbabwe. The operating subsidiary operates four underground mines which supply ore to three concentrator modules (two at Ngezi and the third one at Selous). Production from the mining operations is processed by the three concentrators and then further refined at the Selous Metallurgical Complex (‘SMC’) in Selous where the smelter is located.

In order to reduce the risk that Africa and Zimbabwe may pose, Zimplats’s management team and Board is made up of individuals that bring a host of African experience – helping the company negotiate with governments and keep their operations running smoothly.

The Zimplats share price felt the effects of the pandemic crash in March 2020. However, the stock price recovered quickly – driven by sound operations by Zimplats and by the recovering Platinum prices. As the Platinum prices started to climb higher in December, so did the ZIM share price. Given Zimplats simple and efficient operations, wherein the company mines, processes and sells the precious metals, the stock is a great proxy to gain exposure to the highly precious platinum and palladium markets, and also enjoy a great dividend.

Sales wise, Zimplats have done exceptionally well. The company recorded positive sales growth across all of the metals and commodities, except Cobalt, compared to the previous corresponding period. This demonstrates Zimplats ability of being able to not just sell in a Covid induced environment, but to surpass their figures from December 2019 – a period prior to the pandemic.

The average metals prices also improved for all metals except Nickel and Cobalt during the period – boosting revenues. In fact, Platinum prices witnessed the least growth with just 3% as the average platinum price came in at US$921/ounce. The big gainers influencing Zimplats’s numbers were:

Platinum, Gold, and Palladium prices declined heavily during Covid19 market crash. However, they recovered very quickly and surged higher towards all-time highs. The recovery of all 3 metals can be traced in the chart below wherein Gold is represented by the orange line, palladium by the blue, and platinum by the green & red.

As we enter 2021, there is uncertainty across global economies and markets. While the vaccine has bolstered market sentiment, we are still a long way away from seeing all the economies opening up. This is a very positive situation for precious metals that are going to go during a crisis. We expect the gold, platinum, and palladium prices to sustain. Our expectations for all 3 metals in the long-term are bullish. 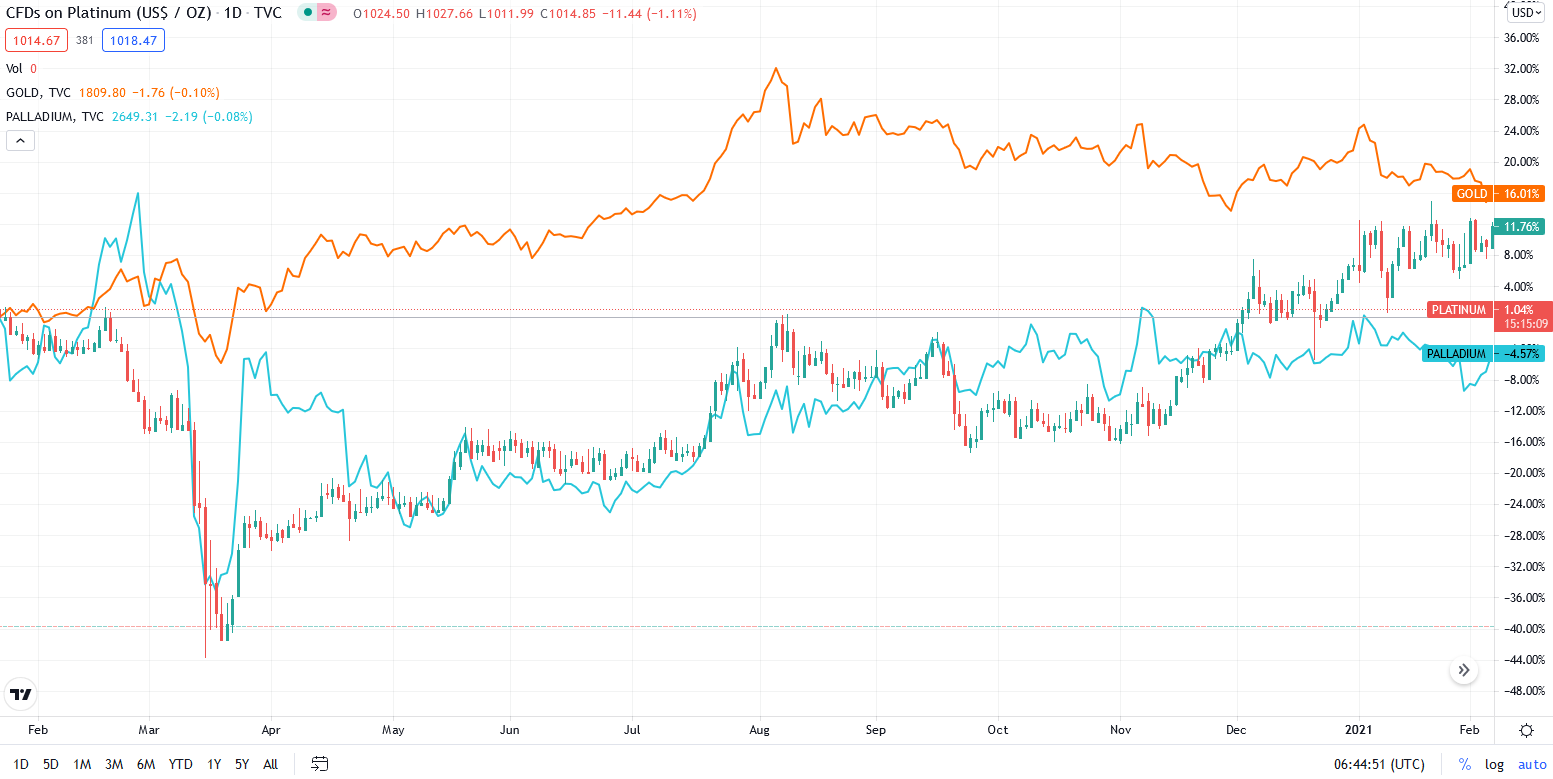 Administrative expenses for the half year at US$4.2 million increased 14% from the US$3.7 million incurred during the same period last year mainly due to higher corporate social responsibility costs. The Group recorded net foreign currency exchange losses of US$0.1 million compared to US$5.6 million in the same period last year owing to the rate movements of the Zimbabwean Dollar observed on the foreign currency auction system that was introduced in June 2020 by the Reserve Bank of Zimbabwe.

Cash operating cost per 6E ounce produced at US$642 was marginally above US$641 for the same period last year. This was driven by an 8% increase in 6E ounces produced and savings on procurement costs. The positive impact of higher production volumes and lower procurement costs was partly offset by additional costs incurred to mitigate the impact of COVID-19 on our employees and the community in which the Group operates. Finance costs at US$1.7 million were 31% higher than the same period last year as there were no borrowing costs eligible for capitalisation during the period under review. 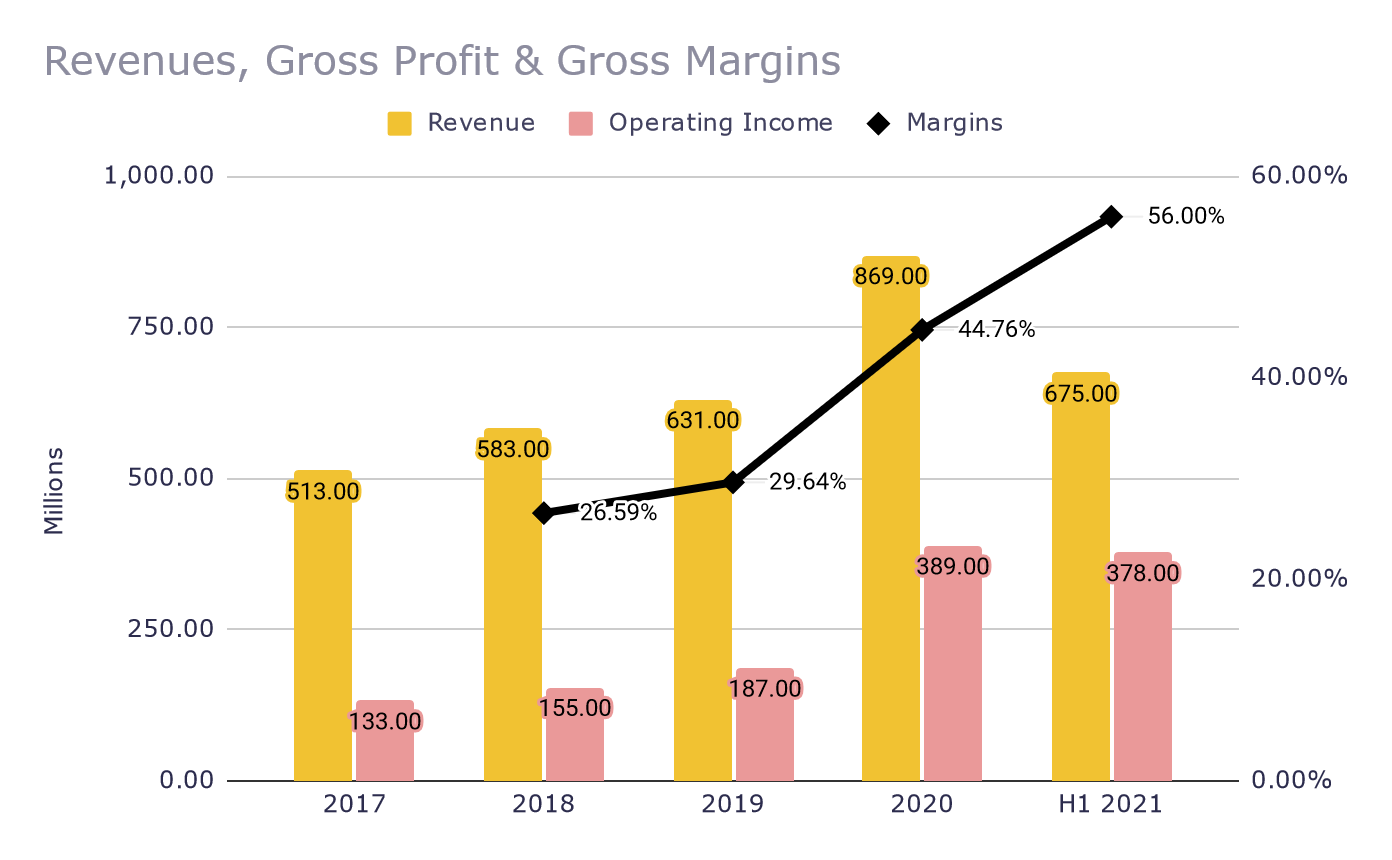 We can see from the chart above just how good the half year earnings have been relative to all the full year performances. It is important to note how far Zimplats has come now. The company’s Revenues and Gross Profit just from the first half of FY2021 is larger than the full year numbers posted in 2017, 2018, and 2019.

The board approved the implementation of Mupani and Bimha mines upgrade (the replacement for Mupfuti Mine) and the construction of a third concentrator plant at Ngezi at an estimated total cost of US$297 million. Work on the projects has commenced targeting commissioning the concentrator plant in 2022 with the Bimha and Mupani mines upgrades scheduled for completion in 2023 and 2028, respectively.

It looks like Zimplats has turned a corner in the past year and it’s only a matter of time until the share price reflects the momentum the company has built up in operations. The chart below shows how strong their EPS growth has been in the recent past. Following a miserable performance in 2018, Zimplats has grown its EPS by over 4000% in FY2019. It has not stalled after either – as the company has continued to grow their EPS at a steady pace – 80% in FY20. In the half year FY21, Zimplats’ EPS is just 4% shy of the full year FY20 EPS. With favourable metal prices, good mining, and processing to continue, the FY21 full year EPS is expected to be very positive.

The board of directors declared an interim dividend of US$45 million (equating to US$0.42 per share) for payment to shareholders on record as of 19 February 2021. In Australian Dollar terms, this equates to about $0.527 a share. While Zimplats does have a fairly low payout ratio, their yield is incredibly high at 9%. 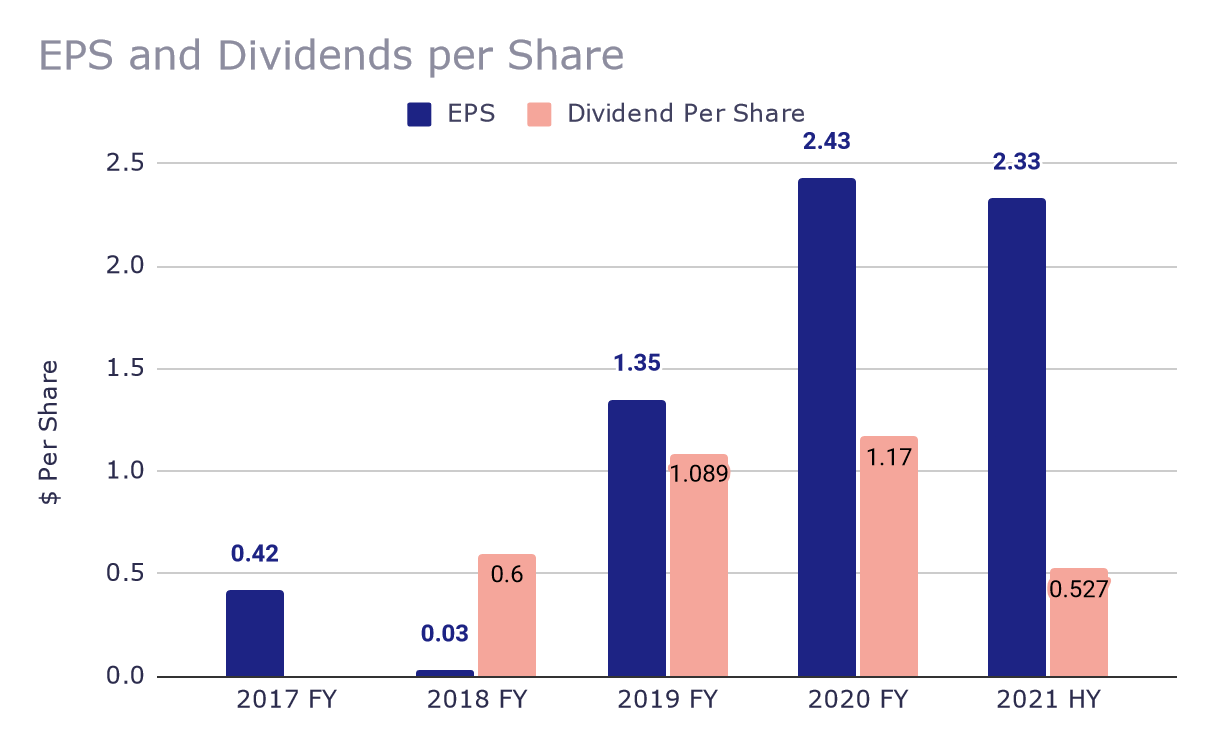 Coming to the valuation, Zimplats is priced at a discount at the moment. ZIM shares are trading lower than their Net Tangible Asset Backing at around $12 a share. As of June 2020, the NTA of Zimplat was known to be $15 a share. However, given their performance and the mining increase from their assets, this number is not expected to remain low. The Zimplats stock price has been bogged down by the sentiment towards a Zimbabwean asset. Political risk is the biggest risk here. However, with the impacts of the pandemic, it should be top of the agenda for the government in Zimbabwe to let these mines run – so as to spark a recovery. Zimplats also trades at a very modest P/E of 5x – which is a very small price to pay considering:

Zimplats have recovered well from the depths of the pandemic. The company’s management has plenty of experience dealing with African governments and has turned the tide when it comes to the operations of Zimplats. Mining has increased and revenues have been further boosted by the positive momentum in commodity prices of precious metals. Yet, the Zimplats stock price is trading at a P/E of just 5x and less than their NTA of $15 a share. With another expected solid performance for the remainder of the year and the high dividends on offer, we recommend investors to “Buy” Zimplats.