We continue to recommend members to "Buy" as the firm still has tailwinds and is unaffected by the China-Australia geopolitical tensions.

Whitehaven Coal (ASX: WHC) has returned 29.62% to members who bought the stock when we recommended a “buy” on the 7th of October. Amid rising Australia-China geopolitical tensions, Whitehaven Coal has been a haven for investors wanting exposure to Coal. This is because only 1.66% of WHCs revenues come from China. Its biggest markets are Japan, Taiwan, Korea, and India. Almost all of WHCs coal production is exported, with revenues from Australia contributing just 0.77% to the total revenues. 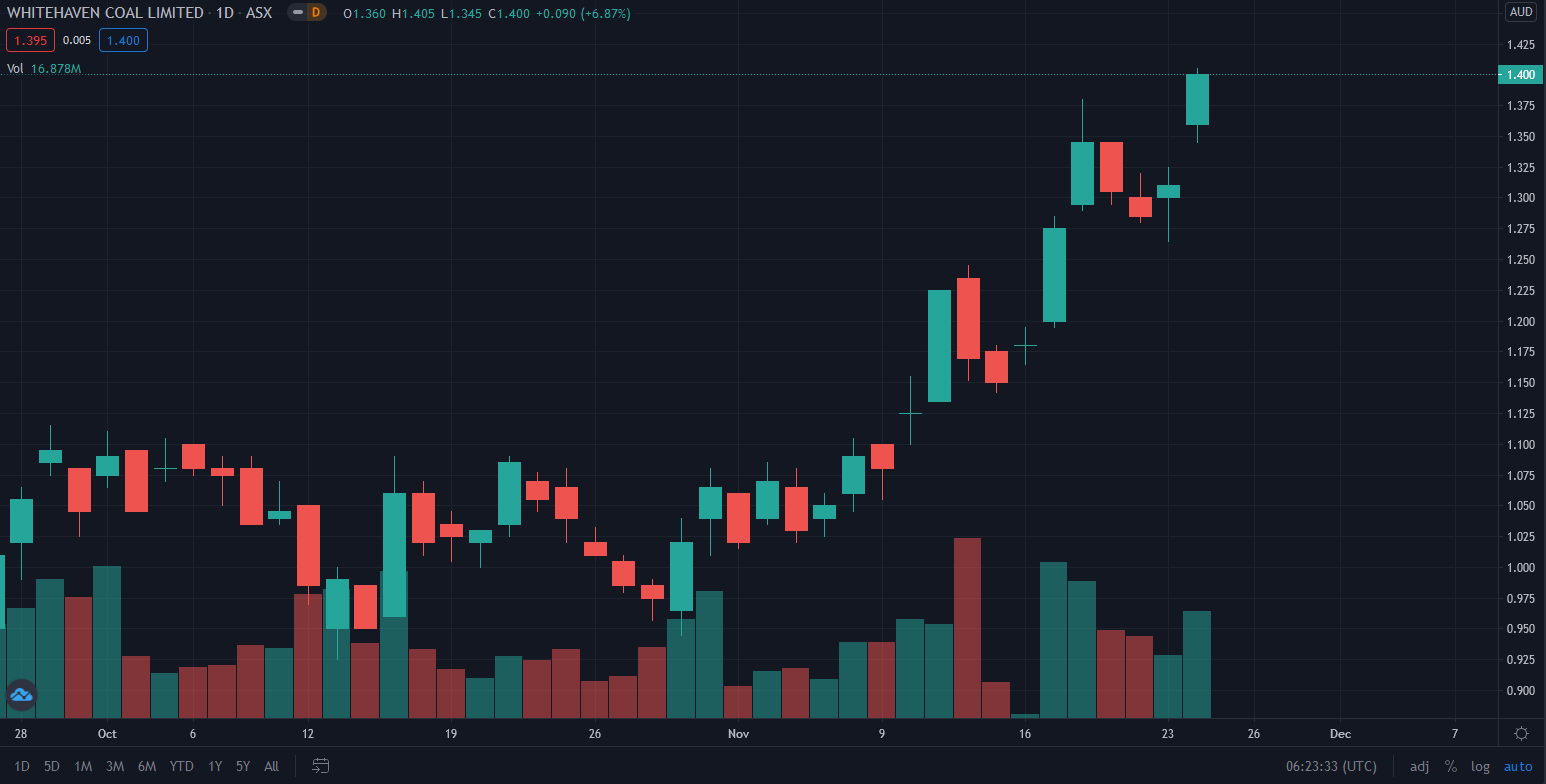 Coal has become one of those commodities that many institutional investors are staying away from due to the reputation of the commodity during times when climate change has to be taken seriously. However, the medium-term outlook for the commodity still remains strong. A fundamental shift towards renewable sources of energy does not happen overnight, and coal will still continue to play a big role in energy generation. Low quality coal will be the first to take a hit, and this will partly play into the hands of WHC given their coal is of high quality and contains lower emissions. All of WHCs customers are a part of the Paris Agreement and each one of them are consistent with the emission outcomes – indicating that there is no risk of sudden demand shifts in one of WHCs customers. The Australian coal sector is fundamentally better equipped than coal sectors from other countries due to the quality of the products. WHCs products still remain strong and their future still offers margin for growth.

With the nature-nurture debate out of the way, let’s have a look at one of the reasons WHC has gained close to 30% over the last couple of months. The price of coal has recovered recently and is expected to rise slightly over the course of the next 6 months to a year. While supply and demand move commodity prices, there have been triggers that have changed macro-economic factors recently – giving rise to a growth in demand. Economic activity and the price of coal and oil are highly correlated. The news of a vaccine and all the positivity that has come since then regarding the rebound in economic activity has increased the demand for coal and oil. While Europe and the USA is still yet to recover from the pandemic, Biden’s win over Trump brings the promise of a better handling of the pandemic in the world’s biggest economy – which is a big catalyst for global commodity prices. Hence, economic growth is vital in determining the price of coal in the future. The emerging market economies of Asia are expected to bounce back in 2021 – giving rise to higher demand for the commodity.

2020 Fiscal Year was a difficult year for Whitehaven Coal and for the overall coal markets. Coal value dropped in 2020, with an average price of A$ 104 per tonne while in 2019, coal was valued at an average of A$ 145 per tonne, down 28%. The fall in coal prices was the main cause of the recent decrease in EBITDA and cash flow from operating activities. Moreover, during the first half of 2020, the Maules Creek operation was affected by the impacts of drought and consequently an increase in staff turnover. Also, the company experienced mining issues at some of its sites which caused a 500Kt and 600Kt deferral longwall production. Whitehaven’s operational difficulties combined with the cessation of Rocglen caused lower production and lower volume output, down 1.3Mt. Reduced sales volume impacted on the firm unit operating costs.

While coal prices have started to bounce back, the prices are still lower compared to FY2019 when global economic activity was high. A weaker Australian dollar during the year benefits exports and hence the margins of WHC benefitted, offsetting the lower coal prices partially. Production suffered during FY2020 and hence sales volumes dipped as well. Resulting in lower revenues and lower margins during the year.

The recent September quarter of FY2021 has been in line with the guidance WHC had initially put out. Coal sales in the quarter was 6.0Mt – 13% rise from the previous corresponding period. The run of mine (ROM) production increased by 2% on pcp as production levels stood at 4.9Mt. The coal stocks at the end of the quarter stood at 1.8Mt. All-in-all, Whitehaven coal has had a good quarter – in line with the general state of global economic activity.

WHCs potential for growth once the economic activities resume will be driven by the following projects:

The near-term projection for WHC is significantly dependent upon the normalisation of the global economy post-pandemic and the industrial recovery. According to the company, recently, industrial activities are progressively recovering with the resumption of term contract shipping schedules and increase in spot demand.

The long-life mines of Whitehaven and the low-cost, high-efficiency coal that they produce adds much needed tailwinds to the firm. The firm has refined its cost of coal guidance to A$69-72 for FY2021. All other guidance forecasts are on track and have remained unchanged. 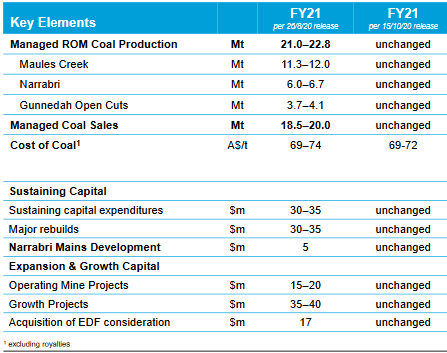 Japan contributed to 77% of WHCs revenues in FY2020. With winter fast approaching in the country and most of the imported coal being used for electricity generation, the forecast for coal demand during the current quarter is high (as heating is vital for electricity demand).

March is tipped to be when we will see the vaccine, and coal prices have been forecasted to go higher in 2021. With both rise in demand and increased coal prices, WHC is well positioned to take advantage of this. While there is a constant headwind for the coal industry with climate change looming large, Whitehaven coal has significant tailwinds given its high quality, low cost production. China exports will not affect the firm as well due to marginal revenues being drawn from coal sales in China. Improving operational outcomes will still remain a challenge for WHC as it has to align itself to a world where coal demand and price will increase, however, they may not to the high levels that were seen prior to the pandemic. While development projects to increase production is an answer in most industries, this is not the case for the coal industry. Capital allocation towards new and expansion projects will remain cautious given the long-term outlook of the coal industry.

Dividends are a big part of investor interest in Whitehaven Coal. The final dividend for 2020 has been cancelled. However, the firm’s dividend policy is still to pay 20% – 50% of its net profits as dividends in the future. The profitability and financial health have been analysed in our initial report on Whitehaven Coal. Since there has not been any updated statements that have been released, the metrics remain the same during this time. Members can view the report by clicking here. 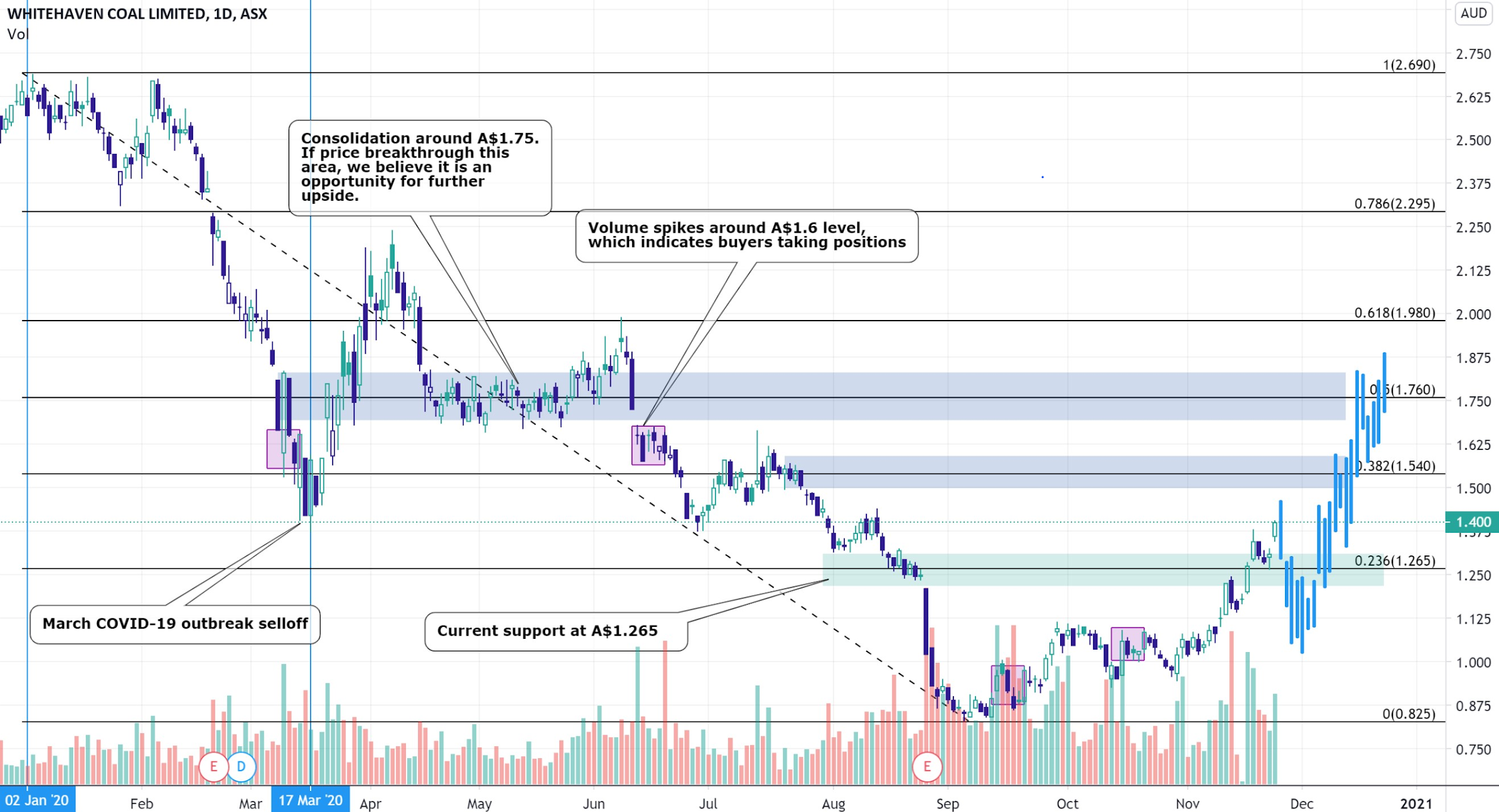 WHC continues its incline, it has almost recovered from the early 2020 COVID-19 sell-off. Early September, WHC reverted its trend, at A$0.825, which is a multi-year key support level since December 2008. Volume started to increase mid-September, suggesting that buyers are taking positions. WHC had no difficulties to go through the resistance turned support at A$1.265 which is also the 23.6% Fibonacci level. The next short-term objective is the 38.2% Fibonacci level, an important junction which coincides with the bottom of the earlier COVID-19 selloff. Technically, we believe that if a breakout of the resistance occurs, WHC may potentially retest $1.75 in the early 2021 and reach $2.0 in 2021 Q2. 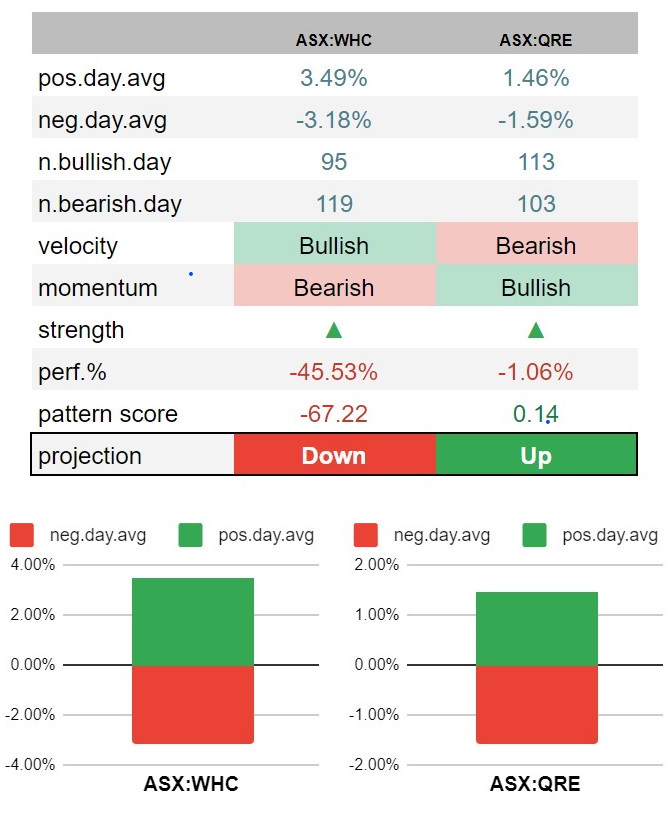 Given the headwinds and tailwinds for Whitehaven Coal, we believe that the firm still has upside potential. Increased economic activity as the world recovers from the pandemic will surely boost coal prices and the demand for WHCs coal produce. We continue to recommend members to “Buy” the stock.