Whitehaven Coal reports record year on the back of soaring energy prices. We recommend a 'Hold'.

Whitehaven Coal (ASX: WHC) financials are basking in the high coal prices and demand environment. Whitehaven achieved a record average coal price of A$514/t for the quarter and A$325/t for FY22. The firm’s production levels are elevated, leading to another strong quarter and a fantastic FY22 – making it their best year on record.

WHC shares are up over 111% year-to-date and over 162% in the past 12 months. The firm restarted dividends following the 1H22 performance and even undertook on-market share buy-backs. After buying back 76.37 million shares (approximately 7% of issued shared capital) for $362.6 million, Whitehaven aims to complete its 10% share buy-back within a revised total cost of $550 million. 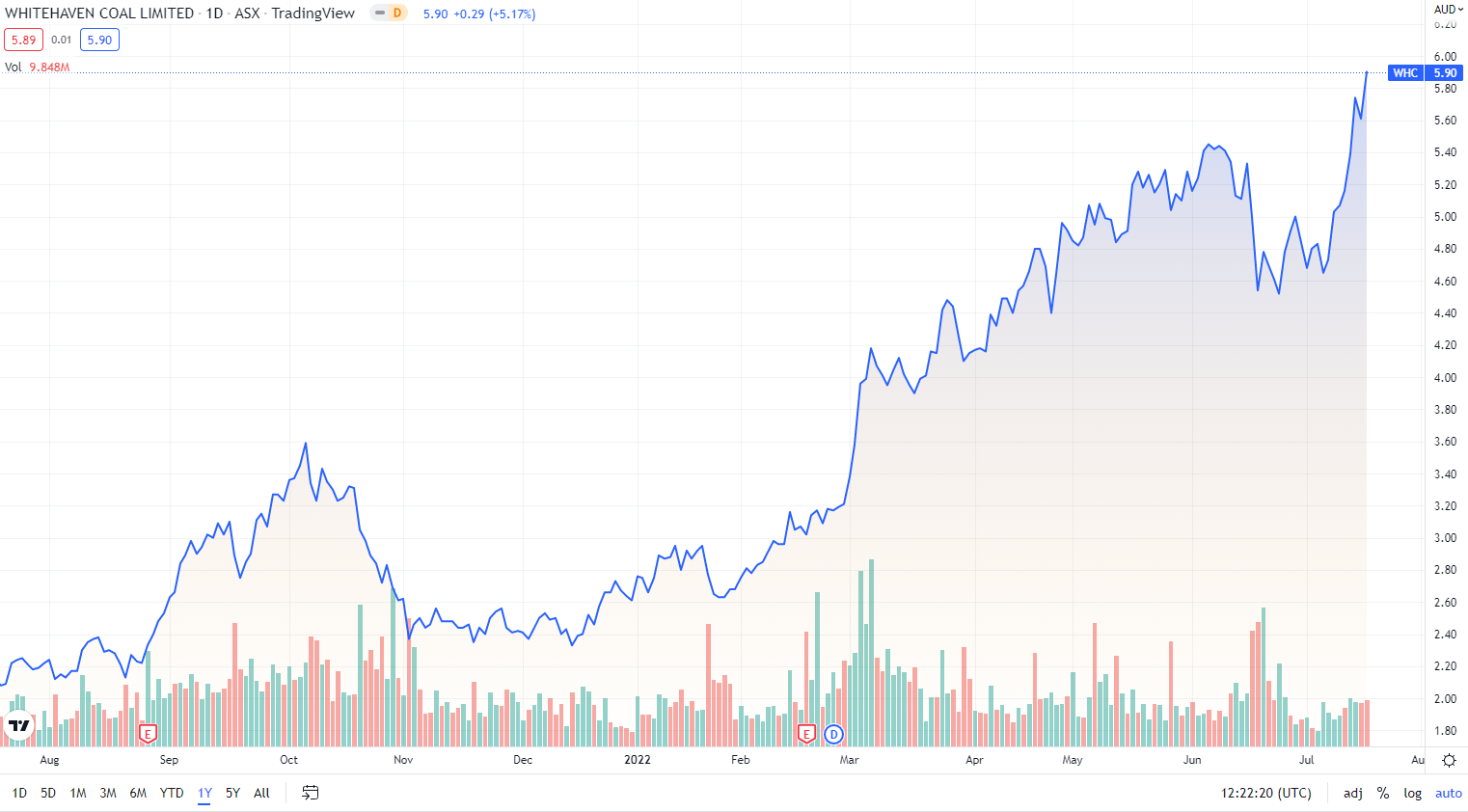 With demand for high-quality coal outstripping global supply, Whitehaven Coal has had its best year ever on record! Whitehaven remains well placed to support energy security through transition and to deliver strong returns for shareholders.

Coal prices set a new record during the June quarter and continue to be well supported. Stronger operational performance has enabled WHC to deliver on its FY22 production and sales guidance despite a tight labour market. Improved operational performance combined with record high coal prices has underpinned WHC’s strongest ever full-year result. The company is expected to report a full-year EBITDA of approximately $3.0 billion, subject to a final audit.

While mine operations performed well and sales were strong, intermittent rain disruption was experienced, COVID-related absenteeism continued, albeit below peak levels experienced in the March quarter, and general labour shortages remain a key challenge for the business.

Subject to the final audit, as part of the FY22 results to be reported on 25 August 2022, Whitehaven is expected to report unit costs of $84/t, which is at the upper end of the cost guidance range.

Despite these impacts, Whitehaven is on tract to report $3 billion in EBITDA for FY22.

All mine operations performed broadly in line, including Narrabri’s scheduled longwall step around from panel 110A to panel 110B, which commenced in mid-June and is due to be complete in late July when longwall production resumes.

Maules Creek ROM production of 3.1Mt in the June quarter was in line with the 3.2Mt delivered in the March quarter, with labour constraints continuing to impact production.

During the quarter, the mine sequence accessed the Braymont seam and the lowest seams in the South West area, which exposed the pit floor to allow increased in-pit dumping in FY23. June quarter saleable production of 2.6Mt was in line with the previous quarter, reflecting the ROM production profile.

Sales volumes of 2.8Mt were 15% above the previous quarter, reflecting the strong saleable coal production in the quarter assisted by a drawdown in stocks.

FY22 ROM production was 1.4Mt below FY21 primarily due to the previously reported flooding in the December quarter and continued wet weather interruptions, COVID-related absenteeism and general labour shortages throughout the year. FY22 full-year saleable coal production of 9.4Mt was in line with the prior year.

Narrabri produced 1.5Mt of coal in the June quarter, up 7% from the March quarter, reflecting consistent longwall performance before the longwall relocation stepping around the expected faulting in 110 panels.

Managed sales of Narrabri produced coal for the quarter of 1.5Mt were 10% above the previous quarter, reflecting consistent production and coal quality. Coal stocks at the end of June were 0.3Mt, in line with the end of March.

There were 0.1Mt of equity metallurgical sales of PCI coal during the quarter, representing 9% of Narrabri equity sales volumes. FY22 ROM production of 4.8Mt was 18% above FY21, reflecting the improved mining conditions in LW110A. FY22 managed sales of produced coal of 4.6Mt were in line with FY21.

For the June quarter, Gunnedah open-cut mines achieved managed ROM coal production of 1.8Mt, which was 150% higher than the March quarter.

Saleable coal production was up 54% on the last quarter due to increased ROM production at both operations and improved road haulage volumes and bypass volumes from Tarrawonga.

June quarter ROM production of 1.1Mt was 194% above the March quarter. While COVID absenteeism continued to impact operations in the quarter, the improved June quarter ROM coal production performance was due to mine sequence changes implemented in response to wet weather impacts in the December quarter.

Saleable coal production for the June quarter of 0.5Mt was up 30% on the previous quarter, reflecting improved road haulage volumes combined with increased yield due to a higher proportion of bypass tonnes.

Coal stocks at the end of June were 0.7Mt reflecting the increased ROM production in the June quarter. FY22 ROM production of 2.4Mt was 7% above FY21 as a result of a planned ROM production increase in FY22. The FY22 managed sales of produced coal of 1.7Mt was 11% below FY21, reflecting lower road haulage volumes associated with COVID-related absenteeism and a lower overall yield due to an increased proportion of Tarrawonga’s coal being washed to produce higher CV products for blending to improve margins.

For the past seven quarters, we have seen consecutive increases in the gC NEWC quarterly index, with the June quarter gC NEWC index reaching a new record high of US$377/t, exceeding the previous record high in the March quarter by US$113/t.

Global supply constraints continued during the June quarter, particularly for high-quality thermal coal. Buying interest has continued from WHC’s customers in Northeast Asia, who are focused on replenishing stocks for the northern hemisphere summer period. Interest from non-traditional buyers of Australian thermal coal also continued to progress, including from European end users. The European coal import embargo from Russia is due to commence in August, which is expected to tighten further the supply of high-quality thermal coal.

An unexpected cold snap in June on the east coast of Australia and domestic coal supply issues saw a government-mandated redirection of coal to the domestic market. While Whitehaven’s high-quality coal is not in demand for domestic supply, this action placed further pressure on seaborne export supply and prices.

The metallurgical coal market experienced a more turbulent June quarter for pricing and sentiment compared to thermal markets. Demand was affected by COVID lockdowns in China, steel export tariffs in India, and softened demand for finished steel products globally, including in Japan.

WHC continues to view thermal coal prices as well supported for CY22 and into CY23, even more so with the heavy rainfall in the Hunter Valley in early July. In metallurgical markets, while pricing is relatively strong compared to historical levels, WHC said that it expects to see further volatility due to global economic pressures.

Whitehaven Coal has had its best ever on record. Soring coal prices are estimated to take full year EBITDA to $3 billion. WHC is now sitting in a net cash position of $1 billion amid the strong cash flow generation. The coal market dynamics are expected to play out positively in the short-term, leading to continued bullish financial performances by Whitehaven Coal. We will further analyse WHC once the company releases its financials for FY22. We recommend investors to ‘Hold’ positions.