The resurgency in coal prices, Whitehaven's top quality assets, and no reliance on China brews the perfect coal investment. A "Buy" from us.

Whitehaven Coal has been one of the top performing ASX stocks recently given the resurgence in coal prices as emerging economies bounce back from the pandemic lockdowns. Whitehaven shares have returned 80% in 2021 and since our initial Buy recommendation back in October 2020 at a price of $1.075, Whitehaven Coal has returned 176%. 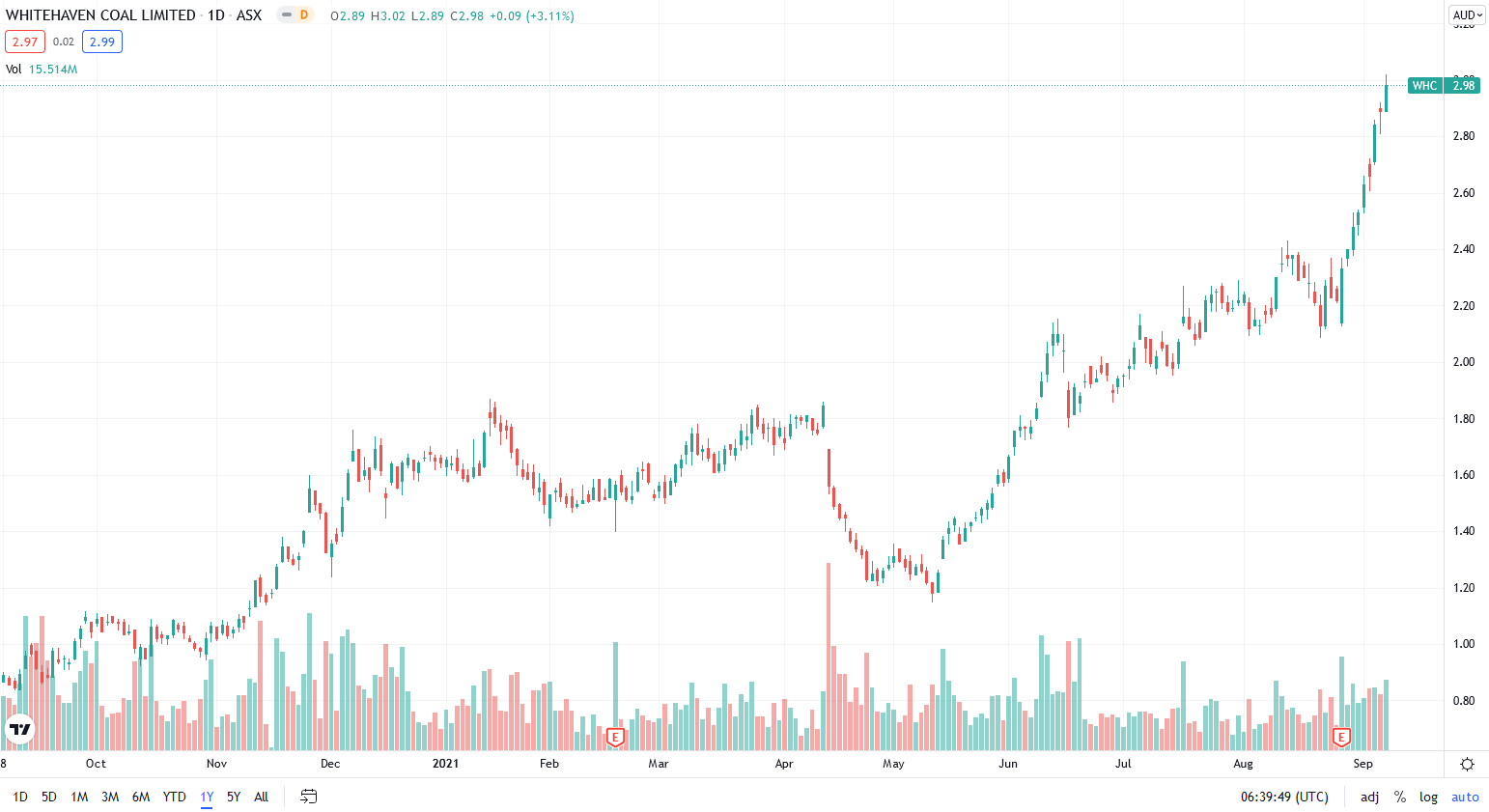 Coal remains Australia’s second largest export, Australia accounts for six per cent of the world’s total annual production behind China (50%), India (10%) and Indonesia (7%). Coal prices across both metallurgical and thermal segments have increased significantly from the lows experienced in mid-2020. The GC NEWC Index has more than tripled from the low of US$48/t in August 2020, to approximately US$170/t in August 2021, while the API5 index is approaching its all-time high at ~US$97/t.

Australia’s coal is also of the highest quality – which means that our coal industry is here to stay, while the rest of the world’s ‘brown coal’ will be the first to go away. This changes the demand and supply balance and increases the reliance on Australian Newcastle Coal in the medium to long-term.

Coal consumption throughout Asia is forecast by the International Energy Agency to grow over the next decade to meet the energy demands of countries like China, India, and South Korea. Tendering from Asia-based customers remains active with increasing interest by customers to secure coal for CY22. Similarly, the PLV HCC Index has more than doubled from lows of US$101/t in December 2020 and lifted other components of the metallurgical coal complex. Availability of high-CV thermal remains tight due to the strong demand from end users and coal producers for coal blending with lower CV coal. Strong China coal demand, supported by increased economic activity and challenges in expanding domestic China coal production, compounded by China’s ban on Australian coal have modified coal flows in the seaborne market and elevated seaborne coal prices to record levels.

On the supply side, there have been numerous disruptions recently. Indonesia has experienced heavy rainfall and equipment availability issues affecting production. Rail and other logistical issues have impacted Russian and South African exports while Colombia has faced industrial action at Cerrejon in addition to the closure of Prodeco. Wildfires have also interrupted supply out of Canada and the USA. All high quality, high-CV thermal coal supply remains tight, and prices are forecast to remain strong through CY21, CY22 and CY23.

There is the perception that there is no new investment in coal, but mines in Queensland have expansion plans despite prickly political pressure. The current Australian government is in strong support of the coal industry given the money it brings in and also the employability the industry creates. The increase in the price of coal and the bullish forecasts are not just a flash in the pan, and the bullish prices are set to remain for a couple of years.

The FY21 result was impacted by the recognition of a pre-tax significant non-cash $650 million impairment charge allocated to:

Whitehaven’s largest production asset, Maules Creek, achieved record annual ROM production of 12.7Mt. This is an 18% increase in production over the previous corresponding period. The production guidance for FY21 from Maules Creek is 12.1 – 12.5Mt.

Narrabri experienced a challenging year for the firm. There were geological challenges that were encountered in the December quarter – resulting in a 34% decrease in ROM production. Mining through the fault affected ground adversely impacted coal quality and price realisation. With steps in place to mitigate the impact, Whitehaven has lifted its FY22 guidance from Narrabri to 4.3 – 5.0Mt.

The Gunnedah open cuts had a very smooth year with FY21 ROM production in line with guidance and pcp at 3.8Mt. Both Tarrawonga and Werris Creek have been producing at consistent levels for continuing operations. The FY22 guidance suggests more of the same at 3.6 – 4.0Mt.

The Maules Creek uplift offset the challenges encountered at Narrabri, and Whitehaven’s open pit operations remained at previous levels. This ensured the group’s overall ROM production was 16.5Mt – in line with previous guidance. Equity coal sales, including purchased coal, were 16.4Mt, 3% below pcp, reflecting the decrease in purchased coal.

Whitehaven’s EBITDA decreased by 33% to $204.5 million. The strengthening of the Aussie Dollar did impact the firm during the year in addition to the geological challenges at Narrabri on both production and coal quality. Add to this the impairment costs we already discussed, Whitehaven reported a $543 million loss for FY21 and therefore did not pay out a dividend. 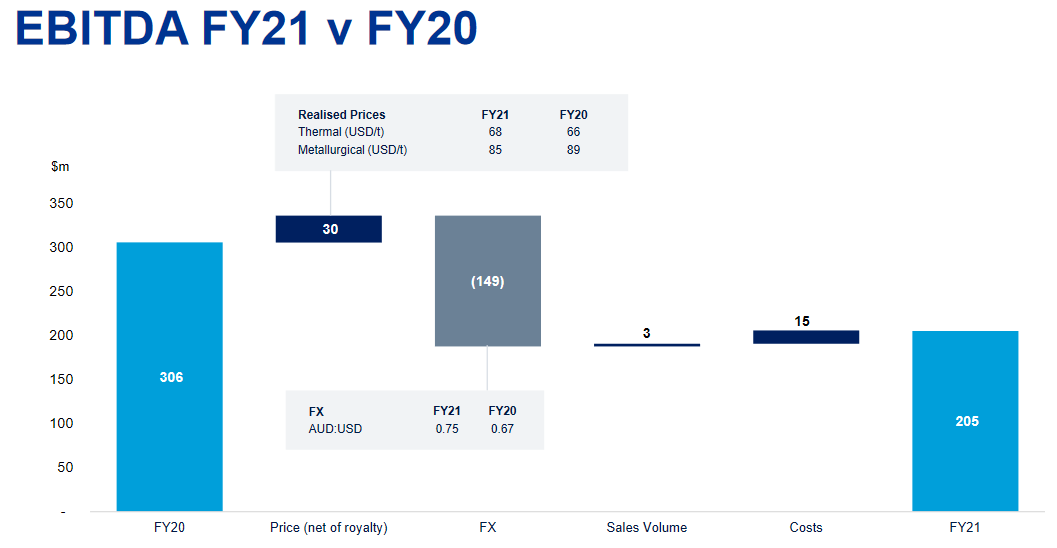 2020 and early 2021 were tough periods for the coal industry. The coal price was under pressure and demand for coal declined as much of the world was gripped by the pandemic. Whitehaven, during this time, did manage to mitigate much of the impacts with strong operating performances. The stock price as a result has been consistently climbing for some time now, and the narrative supporting it is the bullish outlook for coal and Whitehaven’s operations.

WHCs potential for growth once the economic activities resume will be driven by the following projects:

Whitehaven thus has several projects in development, and they have progressed well during FY21. The Vickery Extension Project received state-based approval and is awaiting Federal approval. The Narrabri Stage 3 Extension Project environmental impact statement (EIS) was submitted to the NSW Department of Planning, Industry and Environment. The EIS has been on public exhibition, and Whitehaven is awaiting the Department’s assessment Report. In December, the firm released the maiden Reserve Statement for our Winchester South Project, our first development in Queensland, and the draft EIS was submitted to the state government for review in June.

The total ROM production guidance for FY22 is 20.0 – 21.5 Mt, with most of the contribution coming from Maules Creek. However, it’s worth noting that the second half of the year is being weighted to about 55%. At Narrabri, Longwall change-out is expected in Q2 FY22 and mid-panel step-around of fault affected ground is expected in Q4 FY22. This has boosted the guidance to 4.3 – 5.0 Mt. The Open Cuts are forecasted to stay in line with FY21 performance.

The total capital expenditure is estimated to land between $154 million – $193 million in FY22. The table below shows the breakdown of the capex guidance.

There is a lot of optimism about the continuing demand for Whitehaven’s high-quality product in a more carbon conscious world. The outlook for coal right now looks better than we have seen for some time now. The bullish coal prices will ensure an accelerated timeline for Whitehaven to reduce its current debt levels, which stand at $808.5 million, and will result in dividends to shareholders in the near future.

The $500 million impairment cost is a one-off and we fully expect Whitehaven to be on the right track in FY22. Their resources are great, the coal price is soaring, and their expansion projects have been approved and are ready for expansion in the future. Our forecast in the below chart shows that Whitehaven’s revenues and EBITDA will rebound sharply in FY22 on the back of high coal prices. FY23 onwards, we expect to see stability in commodity prices and for Whitehaven’s financial performance. 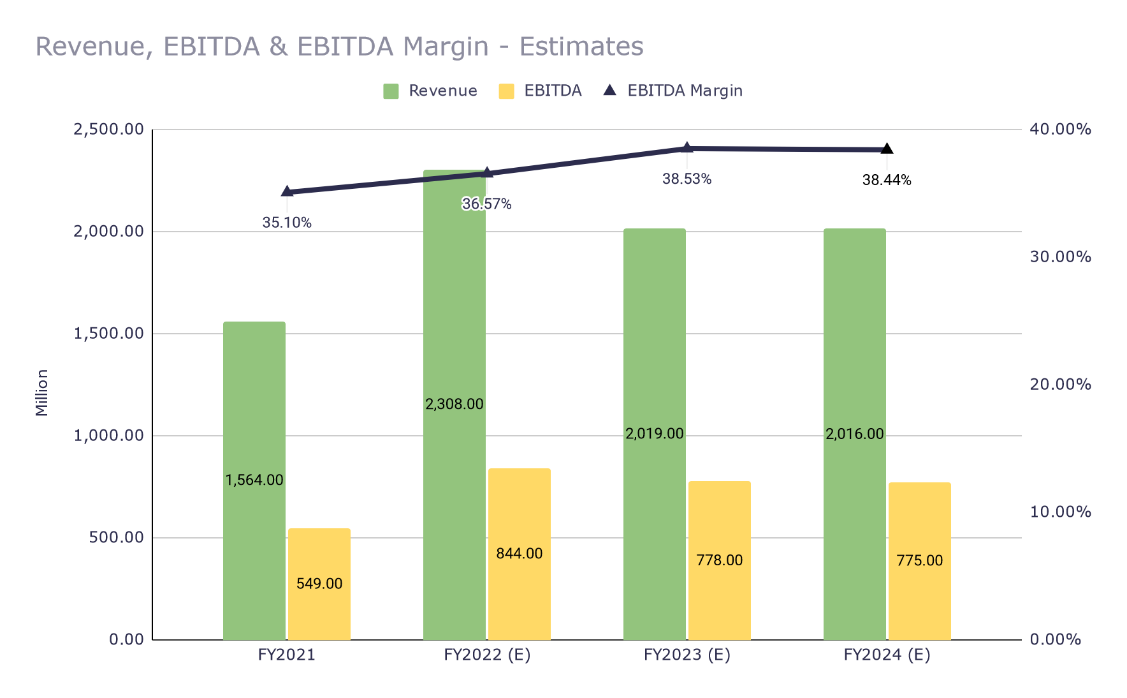 Whitehaven Coal is positioned well amid bullish coal prices which are expected to remain throughout FY22. Whitehaven’s coal is of the highest quality and will remain a desired commodity among their SE Asian export markets as demand consistently ramps up. The company financials are evolving from a rough couple of periods and WHC is expected to increase revenues and EBITDA, reduce debt, and pay dividends in the near future. We recommend long-term investors to “Buy”.