With critical technology in the testing phase, the company is expected to announce commercial agreements with manufacturers and distributors within the next three quarters.

Weebit Nano Limited (WBT) is an Israeli company founded in 2015 and traded on the ASX since 2016. The company is focused on addressing the exponentially growing need for new and advanced memories for computing devices. It is involved in the design and development of silicon oxide-based resistive random-access memory (ReRAM) technology.

The company has successfully raised a total of $12.2 million and it is funded for future commercialization activities:

In August 2019, the company raised A$3.1 million through a combined Placement and Entitlement Offer; On 17th July 2020, the company had announced the successful closing of its A$2.5 million Share Purchase Plan (SPP).

In June 2020, the company announced that it had secured commitments from existing and new sophisticated and institutional investors to place $6.5 million via a two-tranche placement.

The company remains fully funded for its next development phase and remains committed to sign its first commercial customer in 2Q FY 2021.

On 11th August 2020, the company completed the first stage of the stabilization process which is a key milestone prior to the commencement of production. This process was conducted at research partner Leti’s facilities and it improved the maturity of Weebit’s silicon oxide ReRAM technology by increasing cell to cell uniformity, resulting in a higher product yield which is measured by the percentage of working memory cells. The second phase of the stabilization process is underway prior to transfer of technology to a production facility.

The company has received €867,000 (A$1.45 million) from the French Government in relation to its R&D initiative.

The company is in research and development phase and it does not generate any revenue yet. The loss for the year ended 30 June 2020 was $4 million compared to a loss of $6.7 million in FY2019. 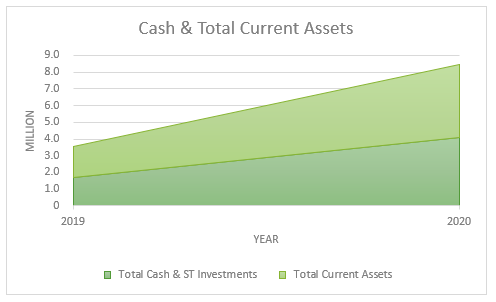 Total current assets were $4.3 million as on 30 June 2020 and primarily consisted of cash of $4.1 million. Total assets as on that date were $4.5 million. Total liabilities were $1.1 million while equity was $3.3 million.

Net cash used in operating activities for the year ended 30 June 2020 was $1.98 million, mainly due to payments to suppliers, consultants and employees, net of Research and Development grants received in France.

WBT has only equity in its capital structure. This means the firm does not have any default risk, and is a strong indicator of a healthy company.

With critical technology in the testing phase, the company is expected to announce commercial agreements with manufacturers and distributors within the next three quarters. With a market capitalization of only $65 million in the development and testing phase, there exists a huge potential for the company to grow in value and generate healthier returns in the long-term.

We recommend a BUY on the stock for our investors who are looking at a medium to long term horizon.