Significant uranium deposits have been boosted with vanadium, nickel, and gold. Following a capital raise, Toro is now debt free as well. A "Speculative Buy" from us.

Perth based Toro Energy (ASX: TOE) engages in the exploration, evaluation, and development of uranium properties in Australia. Its flagship project is the Wiluna uranium project located in the north-eastern goldfields region of Western Australia.

Toro is currently working towards advancing the development of the Wiluna Uranium Project, to enable it to be financed and brought into production with the lowest cost possible, to initiate the Yandal Gold Project within the Company’s Lake Maitland tenement package (including conducting ground geophysics surveys, target generation and a first phase exploration drilling program during the period) and to explore its tenement holdings and seek other new opportunities in uranium and energy-related commodities. The management has been focusing on environmental permitting, technical studies and research and development and the reduction in non-core activities, holdings, and corporate overheads.

Toro has obtained all the environmental permits from the state and federal governments that are required to progress with the development of the Wiluna Uranium Project. Wiluna has access to an established mining centre with water, power, and other services.

While Wiluna is in its early stage, the characteristics of the project are:

The Yandal Gold and Base Metal Project is located only 20km NE of the world class Bronzewing Gold Mine and the Mt McClure, Bronzewing and Sundowner group gold deposits. The Yandal Gold Project represents a unique gold and base metal exploration opportunity – comprising some 243 square kilometres of the mature world class gold district, the Yandal Greenstone Belt – yet it remains relatively untested due to most of the ground being held by uranium companies since the discovery of the Lake Maitland Uranium Deposit in 1972.

In the main Yandal Gold Project area, most of the rocks are under a thick transported cover, making exploration difficult but further ensuring the basement greenstones remained under-explored. A detailed airborne magnetic survey combined with an extensive ground gravity survey and passive seismic survey have highlighted well over 70 target zones based on structural relationships with physical properties alone. First pass air core drilling with very limited reverse circulation drilling has confirmed prospective greenstone geology and favourable geochemical signatures for gold and base metal exploration. The results of that drilling campaign were released by Toro earlier this year, and it confirmed the prospect of the Golden Ways Target Area for gold, with significant gold intercepts.

Data being assessed from Golden Ways drill results along with further results recently received detailing rock chip geo chemistry from an extension of the mapping program in the immediate area. This assessment will include future drilling positions and targets.

The latest developments in the Yandal Gold Project are:

Dusty Nickel Project is located in the northern goldfields region of Western Australia, some 50km east of the world class Mt Keith Nickel Deposit and lying within the tenements that comprise the Company’s Wiluna Uranium Project.

In March 2021, the Company commenced its 2021 diamond drilling campaign on the Dusty Nickel Project, planned to consist of at least 2,600m of diamond drilling, with mud rotary collars where needed, to penetrate through the paleochannel that lies above the Dusty Nickel Discovery. Approximately 600m of the overall programme will consist of drilling to complete the 2020 drill plan at Dusty. It is expected that the overall drill plan should result in a maximum of 12 mud rotary/diamond or diamond only drill holes. 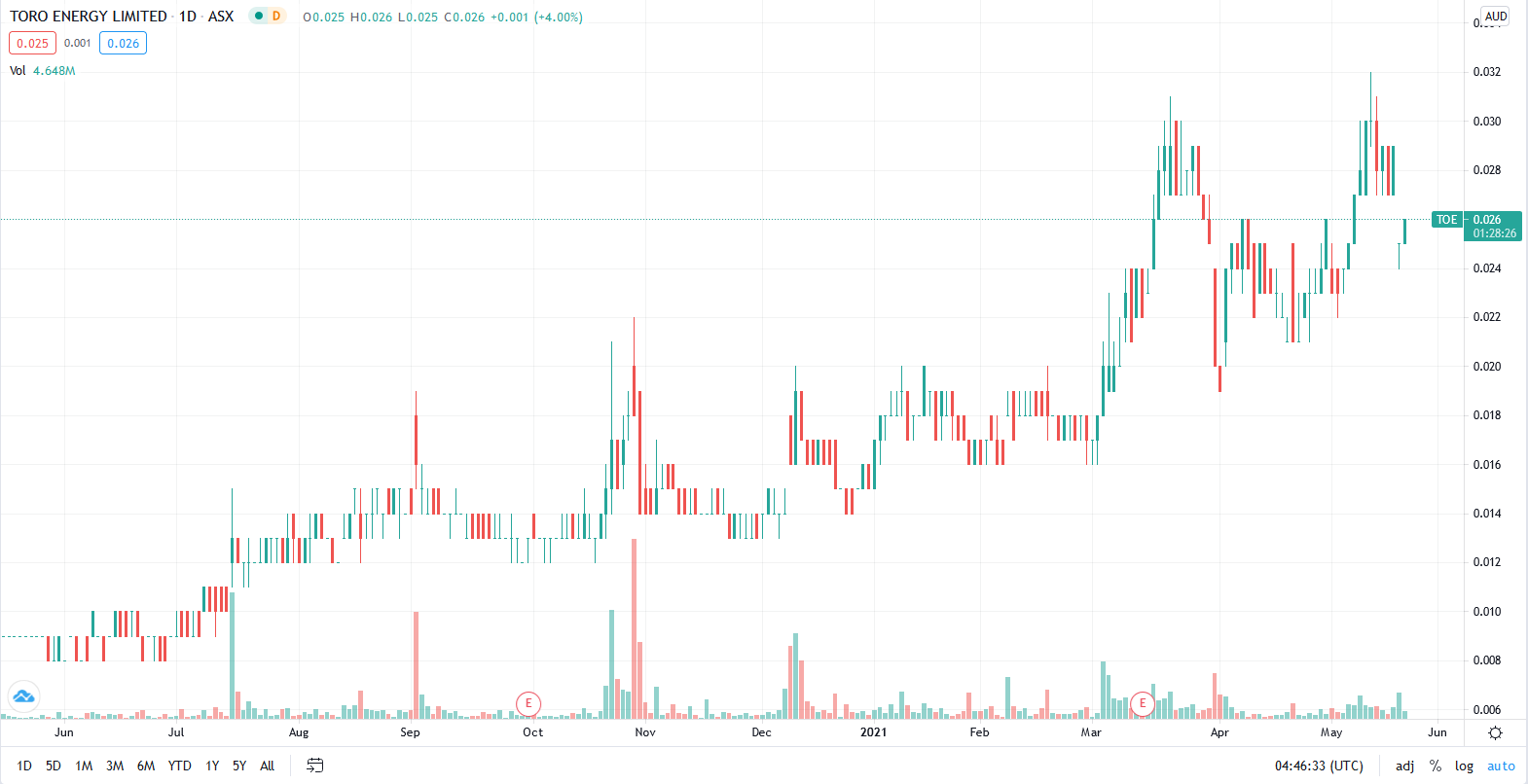 With Preparations underway for the next phase drilling programme at Dusty, a combination of mud-rotary and diamond techniques focused on the magnetic trend associated with the massive nickel sulphides intersected in the 2020 campaign. To r o aims to complete the 600m remaining from the 2020 drilling campaign and then move on to the initial phase of the 2021 programme, which will include at least 2,000 metres of mud rotary/diamond drilling. In addition to this:

Just last week, Toro announced that they will be raising capital via an institutional placement. Toro is looking to raise $15 million at a share price of $0.023. In addition to the Placement, the Company has entered into an agreement to repay approximately A$15.6 million owing to its largest shareholder, Sentient by way of converting approximately $6.7 million of the Debt via the issue of approximately 291.3 million new Shares at the Offer Price and to repay the balance of approximately $8.9 million in cash from the proceeds of the Placement. The Debt Conversion will be subject to shareholder approval at an extraordinary general meeting to be held in approximately mid-July 2021. The other substantial shareholders of Toro Energy are – OZ Minerals and Mega Uranium.

The proceeds of the Placement will be used to fund the following:

The long-term demand for uranium is growing, primarily from new nuclear power plants in emerging markets. 2020 was a year with a record uranium deficit, which will help to speed along the recovery in price. In 2019, output from all countries was 64,566 tonnes, or 142.3 million pounds, accounting for 81 percent of all global demand. A 13 million pound decline into 2021 will likely continue to support a higher price. Uranium was one of the best-performing commodities in 2020.

Nuclear fuel demand remains strong. The COVID-19 crisis had not affected the global nuclear power output. Hence, total power demand was substantially impacted during the period in several markets and nuclear power contributed disproportionately to meeting demand as a preferred source for its resilience. Nuclear power had proven to be a reliable source of power, particularly during the pandemic because nuclear energy production is not subject to the same supply chain which involves labour risks that pressured other baseload power alternatives. In FY2021, reactor construction continues in key markets such as China, India, and Russia. In addition to China’s affinity towards uranium for nuclear energy, the industry’s prospects in the USA have also lifted considerably with the Biden administration demonstrably supporting nuclear power as an essential part of the US clean energy mix.

Accounting for the considerable increase in demand coming the way of the uranium industry, and the supply shortages due to Covid19 disruption and with full scale current production levels not matching up to the demands, the global uranium sector is currently running a structural supply deficit of approximately 11%. The World Nuclear Association estimates suggest that the supply deficit could double to 22%, and that the deficit in global production could maintain the supply pressure over the next 20 years.

Toro Energy has a prime land position in the heart of the Yandal Greenstone Belt, alongside Bronzewing which is owned by Northern Star Resources. The uranium deposit at Wiluna is of significant value given the Mineral Resource available. The discovery of vanadium as a by-product increases the potential of their flagship project further. Other than uranium, there is significant upside potential from the exploration projects that Toro Energy have undertaken. The entire region is underexplored for all metals apart from uranium. Initial drilling shows tenure highly prospective for gold, base metals, and nickel.

Over the last 30 months Toro has completed project scale geophysical surveys followed by first pass air core and RC drilling with follow-up diamond leading to the Dusty Nickel Sulphide Discovery and the identification of a number of prospective target areas for gold, base metals, and nickel.

The Gold Results are very encouraging from the limited drilling activities that have been conducted so far. These results have warranted a follow up at Golden Ways. 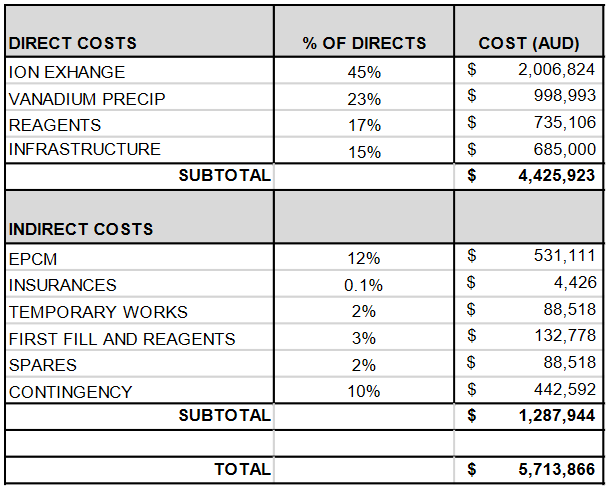 Engineering studies from Toro Energy shows that changing the processing plant proposed in the scoping study to include the production of vanadium as a by-product would be economic even at the lower end of historical vanadium prices.

Toro Energy continues to actively explore in the Yandal in 2021 with its Diamond Drilling Programme. This will have the potential to discover new metals in the largely unexplored region.

The capital raising represents a pivotal moment for Toro as it transforms their capital structure. Toro emerges debt free and well-funded at a time when the uranium market is entering a new phase of growth. Toro’s balance sheet will be strengthened and de-risks the investment for investors. The Wiluna Uranium Project is one of the three Western Australia’s advanced uranium projects with environmental approval from the state and federal governments. The capital raising allows the company to continue its development of the Wiluna Project and continue exploration activities at Dusty Nickel and Yandal Gold Projects. 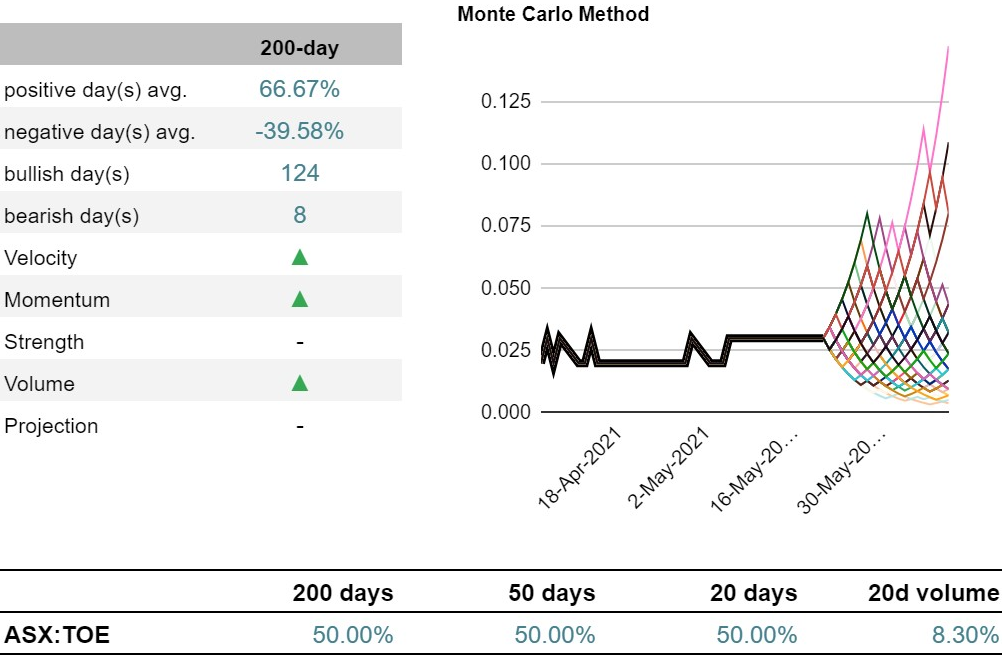 TOE has been in a continuous decline ironically before the global market sell-off in March 2020 due to the COVID-19 pandemic first outbreak. TOE since April 2007 was trapped in a bear market losing more than 99% of its value from A$ 1.35 down to 0.3 cents per share. However, the scenario changed during the rebound post-COVID sell-off and TOE exhibited an impressive upside momentum, up 969% hence, the share appreciated by almost ten-fold from it’s all-time low. On its way up, TOE drew a perfect 45 degrees angle trend line confirming its long-term price reversal which is a very positive sign. TOE has found its price equilibrium around 2.5 cents per share which suggest that TOE may trade inside the 2.1 and 2.8 cents range in the near term before a breakout of the recent high occurs at A$ 3.2 cents per share.

TOE is currently trading inside a relatively large range of 1 cent per share, between the 38.2% Fibonacci retracement and the recent high, A$ 2.1 cents and 3.2 cents, respectively. The near-term key level is the 23.6% Fibonacci level at A$ 2.5 cents which may offer relatively good support as it represents TOE’s price equilibrium. A breakdown of the 2.1 cents level may trigger a sell-off from market participants which entered the position earlier at 1.8 cents per share and temporarily send TOE shares down to 1.4 cents. On the upside, a clear breakout of the recent high at A$ 3.2 cents will open the door to a rally above 4 cents and eventually reach the 5 cents price target.

Volume slightly increases since the last 200-day with the 20-day volume average up by +8%. The price action remains bullish in the near term, evolving in a range between A$ 2.1 cents and 3.2 cents per share. 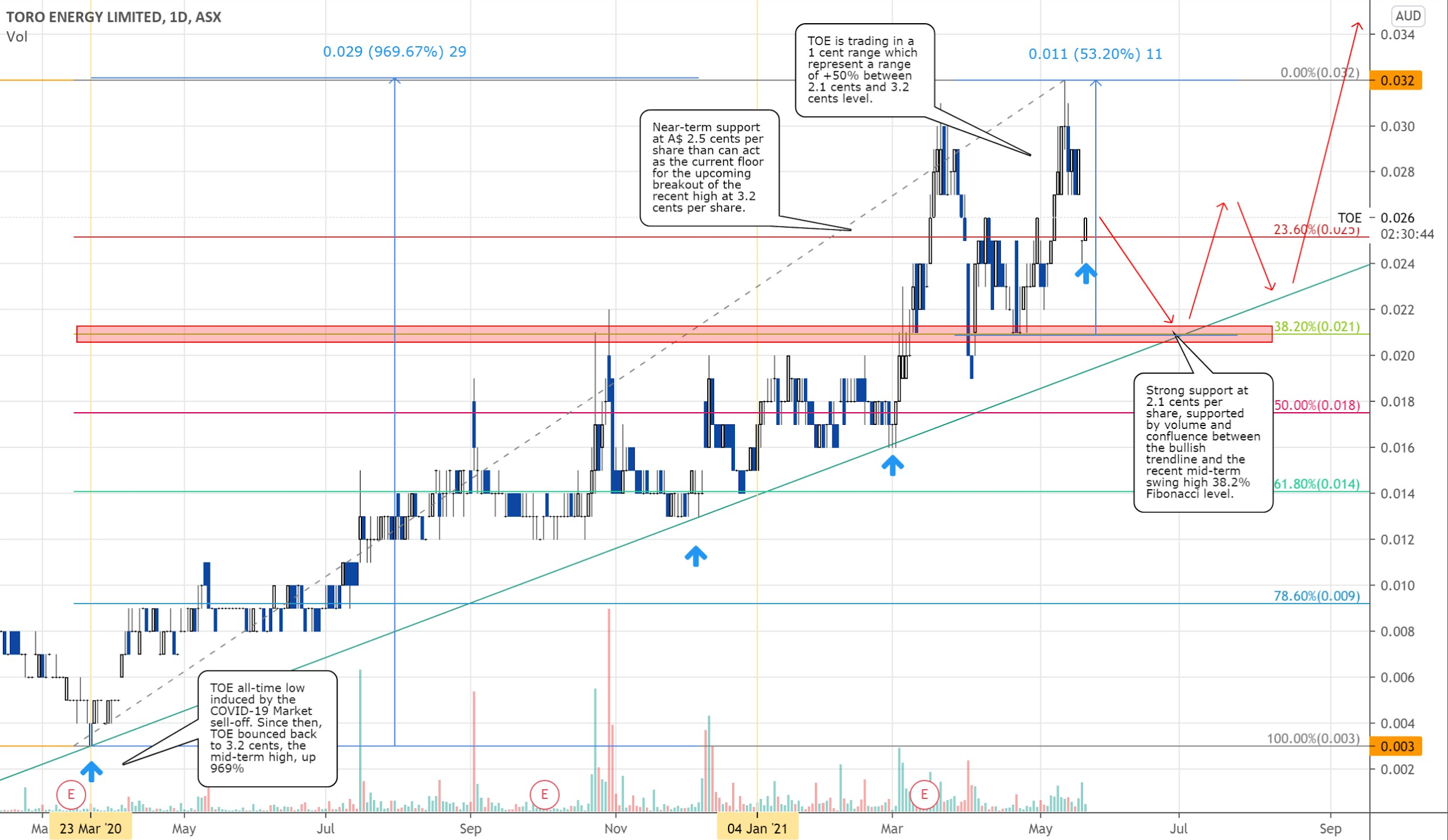 Toro Energy is now a debt free company with enough capital to proceed with its development of its flagship Wiluna Project, one of WA’s only environmentally approved projects with uranium and vanadium deposits. The firm is also continuing to explore the region for other metals to add to the nickel and gold deposits already found. Toro Energy is in its very early stage, albeit with an estimated production capacity of 84 million pounds of uranium from Wiluna, we issue a “Speculative Buy” recommendation.